No matter where you live, it pays now and then to read the Monterey County Weekly. That’s where I learned this week that one can now listen to a live stream of sound from the ocean depths, captured by a hydrophone sitting 3,000 feet below the sea surface and about 18 miles offshore from Cannery Row.

Monterey’s canneries are long gone, of course. So is the sardine fishery that supplied them, inspiring the Steinbeck novel. So is the waterfront laboratory of Steinbeck’s collaborator Ed Ricketts, whose memory lives on in the world-class Monterey Bay Aquarium his work helped to shape.

But as I listened to the mysteriously soothing music of the aquarium’s newest undertaking, I couldn’t help but imagine those two chroniclers of the Sea of Cortez tuning in, too.

You might assume, as I did, that underwater landscapes are pretty much silent except for the occasional traveling chorus of humpbacked whales. Not so. Sound travels about four times better in water than in air, but we’re not well equipped to hear it unaided, or to dive very deep without ear protection against the pressure.

But a decent hydrophone, or underwater microphone, like the aquarium’s can hear rainfall at the sea surface, more than half a mile above. It sounds just like the rain falling on your house, but loud enough to make you wonder about roof repair.

The instrument has captured the sound of an earthquake, too, although good playback requires better speakers than your laptop or phone is carrying, probably.

The hydrophone has a wider frequency range than the human ear, at both the high and low ends, and sometimes special processing is required to make its captures audible to us. Certain vocalizations of the blue whale, for example, are picked up at around 10 Hertz, but most people can’t hear below 20 Hz (the leftmost key on a typical piano is 27.5 Hz).

With the aid of computer processing and playback through decent speakers, however, we’re able to hear the whale as something very like long, bowed notes on a double bass.

The actual capture of sound with a seafloor hydrophone is sort of a snap. The instrument is a two-inch cylinder mounted on an ordinary-looking tripod, and even its placement on the sea floor isn’t difficult if you have a robotic submersible, controlled remotely from the surface. 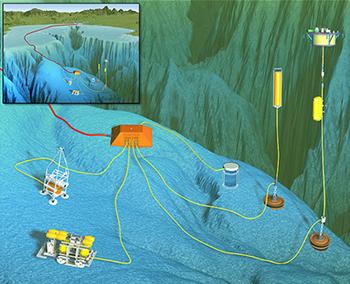 The real problems are getting electric power to the equipment (batteries are weak, replacement is a pain, there’s no solar-powered charging at that depth) and shipping the collected data back to shore (in volumes of 2,000 GB a month).

So, about 10 years ago, the Monterey Bay Aquarium Research Institute laid a 32-mile arc of cable across the bay floor and installed, at the endpoint on a ridge overlooking Monterey Canyon, a bright orange, “trawl-resistant” steel structure that MBARI calls its MARS Observatory (for Monterey Accelerated Research System).

Twelve feet by 15, and 4 feet high, the installation is likened by researchers to a giant power strip, converting 10,000 mainland volts to 375 DC and distributing the juice to plug-ins for as many as eight instrument modules within a 2½ mile radius. The cable’s high-speed broadband lines carry their collected data, including video as well as audio, back to shore.

MBARI offers the observatory for use in testing equipment before it’s deployed elsewhere, but also conducts ongoing oceanographic studies of its own. The hydrophone’s “soundscape” readings are one of three under way right now; another measures long-term vertical movement in the seafloor, and a third monitors the presence and movement of bioluminescent organisms in the neighborhood.

Past work has sampled sediments to measure carbon cycling and oxygen consumption by seafloor-dwelling organisms, surveyed sea life with a high-tech and upward-pointing version of an angler’s fish finder, and gathered microbes for automated identification in a process that uses robotics to break the cells’ membranes and then flow their innards over sensors that read gene sequences.

The hydrophone was installed in July 2015, and for some time researchers have offered a collection of their favorite sound clips here.

The live stream was announced on Tuesday, in recognition that a wider public might like to experience the “continuously changing mosaic of sounds that originate from living organisms (communication and foraging), natural processes (breaking waves, wind, rain), and human activities (shipping, construction, and resource extraction).”

Although the MARS hydrophone is located on the deep seafloor, most of the sounds it picks up are from animals and activities higher up in the water or even at the sea surface. For example, it is common for the hydrophone to pick up the calls of sea lions, dolphins, and other near-surface animals, as well as the sounds of rain, waves, and wind blowing over the sea surface.

High-pitched sounds, such as dolphin clicks, do not travel very far through the water, so if these sounds show up in the stream they are probably being generated within a few kilometers of the hydrophone. However, the low-pitched sounds of ship engines can travel dozens of kilometers, and some whale calls may come from animals hundreds of kilometers from Monterey Bay.

The team cautions that the sea can go quiet at times, but in my brief experience there has been no silence lasting even a full minute. Something seems always to be going on, and not knowing what it is — the usual case — makes it no less fascinating, at least for this listener.

You might even feel you, too, are discovering the world of Monterey Bay from bottom to top, alongside the hydrophone team, whose members are still running into their own surprises:

On December 30, 2015, a supermassive container ship sailed northward past Monterey Bay, on its way to San Francisco Bay. An analysis by marine acoustician Mark Fischer showed that the hydrophone picked up extremely low-frequency (one to 10 Hertz) sounds from this ship for almost 11 hours. The sounds were first detected when the ship rounded Point Sur, about 70 kilometers (42 miles) south of the hydrophone, and continued until the ship approached the Golden Gate, about 125 kilometers (80 miles) to the north….

Another unexpected finding was that calls of Baird’s and Cuvier’s beaked whales were much more frequent than anyone expected. These whales spend most of their time diving in deep water and are almost never seen at the surface, so very little is known about them.