With our warming climate as a key driver, the nation’s spreading population of deer ticks is likely to cause 300,000 to 400,000 cases of Lyme disease this year, new figures from the Centers for Disease Control and Prevention suggest.

Moreover, the unchecked expansion of Lyme disease is far and away the key factor in a disturbing 300 percent surge in all vector-borne diseases — those transmitted by insects — in the U.S. from 2004 to 2016, according to the CDC. In the first year of that period, the CDC counted 27,000 such infections; in the last, the tally exceeded 96,000.

The West Nile and Zika viruses are in that vector-borne group, of course; Zika is one of nine brand-new diseases to join the roster during the study period.  Those and other mosquito-borne viruses, plus malaria, accounted for a 23 percent share of the 12-year total. (You’d have to carry your division to five decimal places to show the fleas’ fraction; on the other hand, the 39 infections they caused were plague.)

This leaves a 77 percent share for tick-borne diseases — 63 percent for Lyme alone. And both of those percentages are surely understatements.

The CDC statistics — and, therefore, most news coverage based on them — reflect only infections reported through official registries, and with Lyme disease the agency knows from its own surveys that only one case in 10 gets counted in this system. Which means the tally of 36,429 new Lyme infections in 2016 indicates a probable prevalence that year of 364,000. 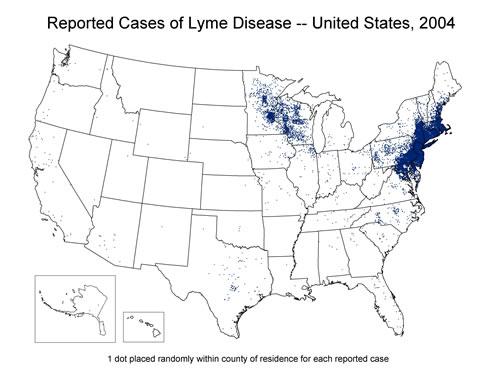 Lyme disease has now been detected in every U.S. state and territory, the CDC says, but 95 percent of the cases were concentrated in just 12 eastern states plus Minnesota and Wisconsin. 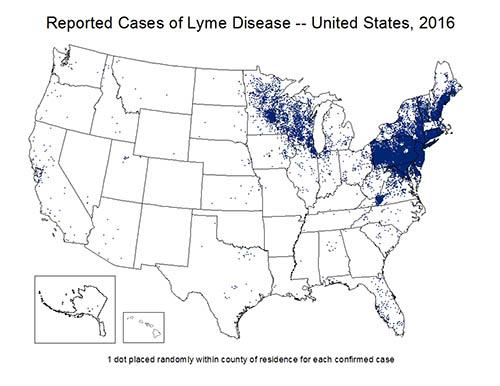 Why the dramatic undercount on this marquee disease?

Official reporting is a resource drain, especially in small medical practices, and Lyme disease remains heavily rural. Also, it’s difficult to diagnose with 100 percent certainty; there are tests to confirm Lyme-like symptoms, but they detect antibodies rather than the infecting bacterium itself. It takes time for these to build up, and a false negative means no report.

Then there is the sheer volume of cases working their way up the reporting chain.

Lyle Peterson, director of CDC’s Division of Vector-Borne Diseases, told reporters last week in a teleconference about the new statistics that in places where Lyme is endemic, “there are so many reports coming in … that the state health department has a difficult time keeping up with the sheer number of case reports.”

Also, Peterson explained that of the country’s 1,900 local health departments, state epidemiology offices and other “vector-control organizations,” more than 8 out of 10 are deficient in at least one “core competency” for accurate data-gathering.

So one can say with confidence that the key trend lines for vector-borne diseases — rates of infections, geographical extent, number of disease types being tracked — are all moving rapidly in bad directions, but we don’t quite know how bad the situation really is or how rapidly it’s growing worse.

The CDC is working on that, Peterson said.

When asked directly about the role of climate change as a driver of these disease patterns, itself a subject of increasing scientific research, Peterson offered a curious two-part response.

What I can tell you is that increasing temperatures have a number of effects on all of these vector-borne diseases. One effect, as I mentioned previously, is that from the tick-borne diseases, it enables the tick to expand to new areas. And where there are ticks, there comes the disease. It also increases the range of the length of tick season, causing people to be at risk for longer periods of time potentially.

With ticks, he said, the trends in range expansion, population size and infection rates seem to increase fairly steadily, moving only upward; with mosquitoes, the pattern is more “episodic.”

But if Peterson is unwilling to specifically credit climate change for those increasing temperatures and their effects — earlier springs, longer autumns and milder winters, with fewer insect-killing deep freezes — plenty of other scientists have been investigating and explaining the connection. Some of them even worked for federal government; a 2014 report from the U.S. Environmental Protection Agency listed the spread of Lyme disease as a recommended indicator “to track and measure the impact of climate change.”

The quoted words are from Mary Beth Pfeiffer’s brand-new book “Lyme: The First Epidemic of Climate Change,” which is at the top of my personal what-to-read-next list.

That reference can be found in an a piece she posted at Aeon.com; highly recommended. But I want to quote at more length from a book excerpt at Environmental Health News, because of what she demonstrates about science working in unexpected ways — leading, in this case, to the discovery of a startling new pathway into Canada for this disease.

Pfeiffer explains that about a decade ago, Canadian scientists alarmed about Lyme’s northward expansion called in veterinarians to help them monitor and map the incidence of infected dogs. This produced a strong scientific paper, which in turn provoked a remarkable insight in a tick researcher named John D. Scott, whose main expertise was in birds.

The highest rates of infected dogs, he saw, were not along coastlines or near cut up bits of forest that are known to be hotbeds of Lyme disease. Rather, the line of highest infection closely followed invisible aerial highways used by songbirds—the common yellowthroat, golden-crowned sparrow, Swainson’s thrush—on their annual north- south migration. As Scott had long believed, birds were dispersing ticks as they always had, but with a new and insidious kick; one called Borrelia burgdorferi, the Lyme disease pathogen.

As he interpreted the canine data, he saw that the country’s migratory flyways were veritable roadmaps for a growing epidemic. The highest prevalence of infected dogs aligned neatly with three of Canada’s four migratory bird highways: the Atlantic flyway, running through the Maritime Provinces, southwestern Quebec, and southern Ontario; the Mississippi flyway, which passes through north-western Ontario and southern Manitoba; and the Pacific flyway, which goes north into southwestern British Columbia.

In a three-year study, he and two colleagues pulled 481 ticks from forty-two species of migrating birds, from Oregon juncos, spotted towhees, swamp sparrows, and American robins. That the birds were carrying fifteen different species of ticks was one thing. Quite another was what these ticks brought along. Nearly 30 percent of 176 Ixodes ticks were infected with the Lyme pathogen.

As concerning was this: half of the larval ticks—namely, tick babies that usually hatch clean and pathogen-free—were now infected after taking their first meal. That could mean only one thing: The “larvae almost certainly acquired borreliae directly” from the migrating birds, which themselves were “competent reservoirs” of infection.

Not only could the birds import ticks into Canada. They could also infect them with the pathogen.

CDC reports a surge in insect-borne illness, and Lyme disease leads the way