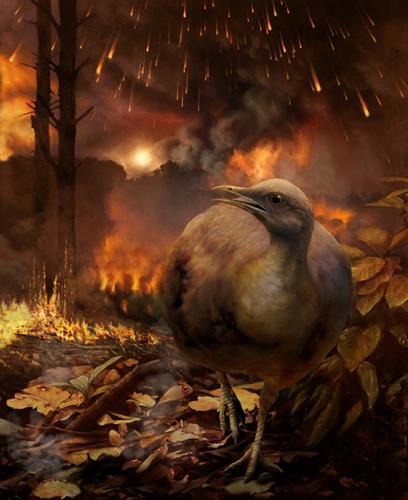 Courtesy of the Field Museum/Phillip M. Krzeminski
A hypothetical surviving bird lineage — small-bodied and specialized for a ground-dwelling lifestyle​ ​ —​ ​ flees a burning forest in the aftermath of the asteroid strike.

When an asteroid whacked this planet 66 million years ago, ending the balmy Cretaceous period and wiping out three-quarters of all plants and animals, how did certain feathered species of dinosaurs manage to survive conditions that killed all the others, and become today’s blue jays and buntings?

Instinctively, you might imagine it had to do with their ability to fly long distances, endure temperature ranges from arctic to tropical, find safety in the treetops … that sort of thing. But you would be reasoning backward from the gifts of modern birds.

Science has found that neither feathers nor flight guaranteed survival, as plenty of avian dinosaurs also vanished in the asteroid’s wake — including the largest single grouping, known as Enantiornithes or “backward birds” from the atypical way certain of their joints come together. Rather, researchers have speculated, the advantage might have been with birds of small size (and appetite), or those with untoothed bills (the better to forage on seeds and grains that remained after the apocalypse).

Now a fascinating piece of evolutionary detective work, published last week in the journal Current Biology, concludes that all 11,000 species of modern birds — from owls and hawks to robins and chickadees — can trace their lineage to just five groups of Chicxulub survivors. And all five were ground dwellers, less akin to a soaring eagle than to a turkey, an ostrich or a grouse.

Not exactly flightless, these avians could take to the air when necessary. But they much preferred to walk, and to nest at ground level, which would give them a big edge over perching birds. Then, as now, the perching types made up a majority of avian species — until the asteroid flattened forests to a radius of almost 1,000 miles, then initiated a reign of global wildfire that wiped out pretty much all the perches still standing.

Over the next thousand years, as the forests recovered, descendants of these ground-dwellers began to fly (and perch) again. But this was a result of newly evolving bodies and behaviors, and part of an evolutionary success story that has no rival I can think of.

As a taxonomical grouping, birds are remarkably “speciose,” or diverse; at 11,000 or so recorded types on the planet today, they far outnumber  reptiles (8,700), mammals (5,500) and amphibians (6,500). Among all the world’s 65,000 animal species equipped with a backbone, about half are fish; among all the others, about one in three is a bird.

This despite their relative fragility, as individuals and species; nearly 1,000 are thought to have gone extinct under human pressures, especially in the tropics. But all of our clearcutting and polluting and general trashing of the natural world add up — so far — to disruption that seems trivial compared to Chicxulub.

It is difficult to conceive, really, the immense upheaval in the evolutionary record that science calls the Chicxulub event, also known as the K-Pg event because it marks a boundary between the Cretaceous period, with its lush profusion of terrestrial life, and Paleogene era of darkness followed by recovery.

Here’s an admirable effort from Audubon magazine’s Hannah Waters, one of several articles in prominent nature- and science-minded publications that have given these new findings a high profile:

Sixty-six million years ago, when a large asteroid struck what is now Mexico’s Yucatan Peninsula, the world’s forests were devastated by fire and ash—and the era of modern birds began.

It was the end of the Cretaceous, though the dinosaurs—T. rex, Triceratops, Velociraptor, and bird-like Ichthyornis and Confuciusornis—that ruled Earth wouldn’t have known that. The climate was warm and humid, the poles had no ice sheets, sea level was hundreds of feet higher than today, and an ocean filled what is now central North America.

Then, the asteroid struck, forming a crater 93 miles wide and 12 miles deep. The impact itself generated shockwaves emanating out in a 930-mile radius from the site, says Daniel Field, a paleobiologist at the Milner Center for Evolution at the University of Bath. “Trees would have been flattened from the force.”

Catastrophic earthquakes and volcanic eruptions were triggered by the shockwaves, and widespread fires likely accompanied the impact, setting forests ablaze. Ash and debris filled the skies, blocking the sun for several years. “Photosynthesis on a large scale would have shut down,” Field says. The result is that most of the world’s forests likely died.

Field, of Britain’s University of Bath, is the principal author of the paper, produced by a team that followed two converging paths from modern times back to the asteroid impact.

First, a group of paleobiologists and ornithologists grouped modern birds by similarities in their body plans — with special focus on the legs — and current ecological niches. Then they traced them backward through the fossil record, seeing their apparent ancestries converge into fewer and fewer strands. It was like tracing a family tree from the leafy crown down to the roots, and here was the first surprise: It appeared that as few as five groups of birds from dinosaur times, all ground dwellers, could account for all of the descendants alive today.

Meanwhile, a second group of paleobotanists looked through the fossil record for plant pollens and spores, which are plentifully preserved and easily dated in sediment layers all over the world. Both were abundant before the asteroid event; immediately afterward, pollen became scarce and spore quantities exploded, indicating that the complex plant communities of the woodlands had been wiped out and their former habitats colonized by a far simpler, more adaptable plant grouping in what botanists call a “fern spike.”

Antoine Bercovici, a paleobotanist at the Smithsonian Institution, said his team found this pattern in the fossil record from New Zealand, Japan, Europe and North America. And he told National Geographic that this conquest by “disaster flora” is still “seen today when ferns recolonize lava flows in Hawaii or landslides after volcanic eruptions.” (Mount St. Helens and Krakatoa, too, by the way.)

Also, the fossil record at the time of the impact is liberally coated in charcoal, leading to the conclusion that the asteroid set off a pattern of global forest fire that covered the earth in a smoky, cooling haze.

The surviving birds were long-legged examples in various sizes, most closely resembled among modern-day descendants by pheasants, chickens, ducks and a little Costa Rican species called the tinamou, which looks kinda like a miniaturized kiwi (without the long beak) or emu (without such an elongated neck).

The upshot, Field says in an announcement of his findings, is this:

Today, birds are the most diverse and globally widespread group of terrestrial vertebrate animals. … Only a handful of ancestral bird lineages succeeded in surviving the mass extinction event 66 million years ago, and all of today’s amazing living bird diversity can be traced to these ancient survivors.

In a somewhat more personal piece he wrote for The Conversation, Field asks, “What does it all mean?”

First, it tells us that, although so many modern bird species make their home in the trees, the ancestors of all tree-dwelling bird groups moved there from the ground up.

More broadly, this work emphasizes how close the world was to losing its bird life entirely. It has become common knowledge that dinosaurs did not go completely extinct at the K-Pg, since living birds are dinosaurian descendants. But increasingly, evidence suggests the very survival of birds through the K-Pg extinction was highly improbable.

So, show some gratitude for the mere presence of our feathered friends. We were almost robbed of the robins and finches in our gardens (and the seagull who made off with your hotdog) before they ever evolved.

The full paper, “Early Evolution of Modern Birds Structured by Global Forest Collapse at the End-Cretaceous Mass Extinction,” can be read here without charge.

How did the ‘dinosaur birds’ survive? New findings trace a surprising story