Much of Minnesota ventured back into heat-wave territory last week, the misery perhaps tempered by comparisons to places where the situation was downright deadly.

Places like southern California, where a 68-year-old mail carrier was found dead the other day in a delivery vehicle that lacked air conditioning, on an afternoon the temperature along her suburban Los Angeles route hit 117.

Well, we’ve come to expect such horrors in L.A., or Las Vegas, or Phoenix and other places in the arid Southwest. These are hot and dry landscapes after all, although the scorchers continue to make news with their increasing frequency and duration as the shifting climate makes them hotter and drier still.

But we don’t expect them in places like Quebec, where around 70 people died as temperatures climbed some 20 degrees out of the normal range last week, reaching the mid-90s in Montreal. That’s where half the province’s fatalities occurred — a modern, affluent, high-functioning city that’s slightly closer to the North Pole than the equator. Its official latitude, 45.5 degrees, is about the same as St. Cloud’s.

Three more fatalities were reported in Ontario, where the authorities require confirmation by autopsy before counting a death as heat-related. Another grim statistic: Ontario emergency-room visits were reported on Tuesday to have surged to seven times the the daily average because of hot weather.

Canada’s suffering is but one example of the extreme warmth in unusually northern locales that may come to define the 2018 heat-wave season.

In Great Britian, whose Met Office has declared last month the hottest June in history, the record-setting location was the small coastal town of Porthmadog in northwest Wales (91.4O F.). Conditions there are also unusually dry, so much so that the outlines of ancient ditches and excavations marking the locations of Iron Age settlements have begun to appear in the terrain of toasted croplands.

Records were also set in places like Caribou and Houlton, Maine, with temperatures of 94; normal is mid-70s. And it was very nearly as warm — 90 degrees — in portions of Scotland and Northern Ireland. Not to mention northern Siberia, according to Katherine Ellen Foley’s roundup for Quartz.

Based on an interview with meteorologist Nick Humphrey, who called this summer’s spikes “absolutely incredible and really one of the most intense heat events I’ve ever seen so far north,” Foley traced some potential implications:

What’s even more alarming, though, are the long-term effects of these high temperatures in this particular region that eventually extend down into lower latitudes. As temperatures remain above average, Arctic sea ice—already thin from weeks of abnormally high temperatures—melts, Humphrey explains. Instead of the sun shining on light white ice, it reflects down onto dark ocean water, which absorbs more heat than the ice would normally reflect. Collectively, this process speeds up the warming of the Arctic, called the Arctic Amplification, and ends up weakening the polar jet stream, which usually protects lower latitudes from the cold temperatures up north.

The result? More extreme weather in both directions—which could mean more repeats of the extreme cold North America faced this winter as a result of an “arctic outbreak” of freezing air.

“2018 has unfortunately been a prime example of global warming’s effect on the jet stream,” Humphrey writes. He predicts that warm temperatures will continue to melt sea ice, and could eventually effect permafrost, or ground that stays frozen permanently (as it’s name suggests). The thawing of permafrost releases more greenhouse gases into the atmosphere, adding to global warming….

Are these northern heat waves unprecedented? Of course not. Freakishly intense hot spells occur from time to time, and the Quebec tally, though startling, is in the margin of error for the death toll calculated during the catastrophic heat that settled over France and neighboring regions in August 2003.

And writing for the Booth Newspapers’ MLIVE site, the weather-focused reporter Mark Torregrossa points out that Michigan’s recent sweltering is nothing like the heat wave of July 1936, when Detroit had seven straight days of temperatures over 100, and Kalamazoo had nine.

Still, the frequency of lethally hot weather is on the increase nearly everywhere, and so is the duration of the high-risk season as the heat arrives earlier and stays longer. Thus the steady stream of advice from public health and safety agencies to prepare in advance for potentially dangerous hot spells — a message too easy to ignore at latitudes like Minnesota’s until an example like Quebec’s 70 deaths comes along.

Preparing for the next one

Extreme  heat has taken only 18 lives in Minnesota since 1990, according to the National Weather Service; on the other hand, among all lethal weather events, only tornadoes and floods have been deadlier. Which is why the service stresses safety and preparation, including the suggestion that residents of Hennepin and Ramsey counties familiarize themselves with the location of emergency cooling centers. They’re not just for Los Angeles any more.

The value of advance preparation is perhaps underscored by an interesting, if small, new study of how heat waves affect mental functioning, even in young people — and perhaps especially in northern regions, where the focus of indoor climate regulation is more on keeping warm in winter than cool in summer.

Reasoning that buildings designed to retain warmth might actually worsen the mental effects of a heat wave, the researchers studied Boston-area university students, divided into two groups by the type of campus housing where they lived: with air conditioning, or without.

All were given tests that measured cognition speed, working memory and selective attention, and these were administered before, during and after a heat wave. Those who lived in non-AC buildings performed more poorly, leading to a conclusion that sweltering temperatures may make it harder to think straight. Also:

So it might be worth thinking now about you’ll cope with the next scorcher. As the map below suggests, unusually hot weather is likely to continue in Minnesota and most parts of the northern United States for at least the rest of the month; indeed, the only portion likely to see unusually cool temps is a small portion of the northern Rockies, where altitude can sometimes offset latitude. 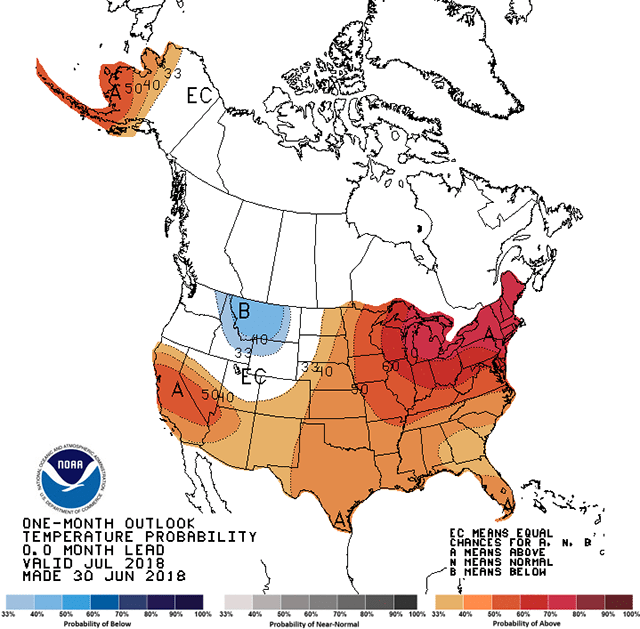