Thinking of the five human senses, how many would you say are also present in the average plant?

Touch might seem obvious in the climbing vine that sends out tendrils to locate and lock onto support, or in the so-called “sensitive plant” that folds its leaves when brushed with a finger.

Yes to all of the above, says the Italian plant physiologist Stefano Mancuso; plants are endowed with close equivalents of all five – and as many as 15 others, like the ability to detect electromagnetic force,  that are generally denied to the animal kingdom and its so-called higher life forms. And their sensing is hardly passive; those vining plants have been shown to direct tendrils toward a support located in advance, rather than flailing until they bump something, and even to display preferences among available options.

If this strikes you as interesting (or preposterous), you might spend a little time with Mancuso’s slim and engaging book “Brilliant Green: The Surprising History and Science of Plant Intelligence,” newly issued in paperback.

Wait, you say. Intelligence? A controversial claim, to be sure, but not a careless one, for this is a serious book from a serious publisher, Island Press, with a foreword contributed by Michael Pollan, who endorses the usage.

Mancuso’s credentials include  directing the International Laboratory of Plant Neurobiology in Florence and founding the International Society for Plant Signaling and Behavior, and when he says plants are intelligent he does not mean a radish can reason, nor that tulips can use tools. He does mean, however,  that plants can use their sensory capabilities to “solve problems and communicate with their surroundings – with other plants, insects and higher animals.”

Also, at times, to lure, capture and devour them; in addition to the familiar Venus flytrap, Mancuso notes that there are roughly 600 plants known to science that eat insects and even small mammals, such as  mice.

Carnivorous plants’ ability to distinguish between desirable and noxious flesh, he feels, makes the case for a sense of taste. But so does the ability of many plants to sample soil for nutrients and toxins via their roots, responding in ways that maximize growth and minimize risk; they do this by analyzing and responding to chemical gradients in a way that the human body cannot.

As for sight, there is the well-known phenomenon of phototropism, in which leafy stems grow toward a light source to enhance photosynthesis. Add to this the less familiar ability of roots to detect light that penetrates soil, and then avoid it.

Smell? Many plants, tomatoes being a good example, respond to predation by releasing aromatic airborne compounds that not only repel attackers but notify neighboring plants to do the same.

Hearing? Mancuso and co-author Alessandra Viola, a science journalist, acknowledge this as the sensory capability that remains most controversial among scientists – if not among gardeners; we’ve all probably known someone who believes in praising their plants or playing Mozart for them. They might be on to something:

A wine-grower from Montalcino, in collaboration with [Mancuso’s lab] and with financing from Bose … grew his grapevines to the sound of music for more than five years. The results were astonishing: the vines given musical treatment didn’t just grow better than those which had nothing to listen to, they also ripened earlier and produced grapes richer in flavor, color and polyphenols.

What’s more, the music kept insects away, by disorienting them. The use of music made possible a drastic reduction in the use of insecticide, and a new, revolutionary branch of agricultural biology came into being: agricultural phonobiology. In 2011, this project was included by EUBRA – the Euro-Brazilian sustainable development council, promoted by the United Nations – among the 100 projects that will change the world of the “green economy” in the next 20 years. 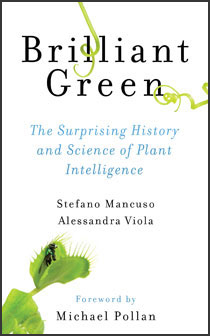 Though most people probably think of plants as insensate, uncommunicative and passive – displaying ignorance and prejudice that “Brilliant Green” documents and challenges relentlessly, at times tediously – Mancuso feels it’s more reasonable to consider that the distinguishing differences between plants and people in sensation, communication and cooperation are most often matters of degree.

This rather new-sounding notion turns out to be rather venerable; among its past proponents was Charles Darwin:

[T]he genius naturalist knew well that plants are extremely sophisticated and complex creatures, with many capacities beyond those that are commonly recognized. He devoted a great part of his life and work to botanical studies (some six volumes and about 70 essays), illustrating through them the theory of evolution that brought him imperishable fame. Yet the vast amount of research on the plant world carried out by Darwin has always been treated as secondary: further demonstration – if any were needed – of the scant consideration plants of always received in science.

One such book of Darwin’s is “The Power of Movement in Plants,” in which “the scientist clearly states his conviction that in the roots there is something similar to the brain of a lower animal.” Not similar in appearance, mind you, but in the more important aspect of function:

In fact, a plant has thousands of root tips, each endowed with its own “computing center” … what’s so shocking about that?

Though Darwin’s assertions were potentially of great consequence, he was careful not to elaborate on them in his books. Already old when he wrote “The Power of Movement in Plants,” Darwin was certain that plants should be considered intelligent organisms, but he also knew that saying so would stir up a hornet’s nest of controversy about his studies. Remember, he’d already had problems defending his theory that humans descended from apes! And so he left the task of developing his thesis to others, especially to his son Francis.

(Francis Darwin was much bolder but no more successful in promoting the concept of plant intelligence; the book reproduces a New York Times report about his talk to the British Association for the Advancement of Science in 1908, headlined: What Darwin Thinks of the Thoughts of Plants / The Son of the Famous Scientist Develops a Theory of Vegetable Psychology Which He Claims Is a Necessary Result of Evolution, but Which Startles the Botanists.)

The largest but perhaps least important difference between plant and animal sensing is that animals exercise their faculties through specialized organs: eyes, ears, brains.

These confer obvious advantages but also carry major vulnerabilities; lose your eyes and you’ve lost your sight. A plant, being more or less stationary, doesn’t need a bunch of specialized organs; it gets the job done with numerous structures and processes distributed throughout its tissues, which also means that many a green thing can lose perhaps nine-tenths of its body mass to injury and still function, even flourish.

The Darwins thought plants were at least as well-positioned as animals to adapt and evolve in changing environmental conditions, and here’s an eloquently supportive statistic: The plant kingdom accounts for 99 percent of the earth’s living biomass.

Among the sensory capabilities reserved to plants are some that humans might find useful as standard equipment, such as the ability to gauge and respond to fine shifts in temperature and humidity, to sense gravitational force, plus the previously mentioned abilities to detect electromagnetic fields and analyze chemical compounds as helpful or harmful. (Also, to take up and break down complex, poisonous pollutants like trichloroethylene without harm.)

It seems to me that Mancuso’s careful definition would include the demonstrations of “intelligence” that recent science has recognized in animals, without nearly as much pushback. And there are indications in plant behavior of something like shared awareness or intelligence across a community, akin to what we see in bees or ants.

In addition to sensing sound, Mancuso and Viola write, recent research findings show that plants can also produce sound from their roots, “though the way this happens isn’t yet clear.”

The sounds made by the roots have been provisionally dubbed “clicking”… In all probability, these tiny clicks result from the breaking of the cell walls – made of cellulose and thus rather rigid – during the cell’s growth. Though not intentionally produced by plants, these sounds may be crucially important. Indeed, the discovery opens up new scenarios in plant communication: the fact that roots emit and can perceive sounds would seem to imply the existence of a previously unknown underground communication pathway.

Research results published in 2012, moreover, show that roots manifest organized behavior typical of swarms, involving a kind of communication between the root system of individual plants to explore the earth efficiently, in order to direct growth. A great benefit for those unable to change locations, with limited space at their disposal!

I could go on with gee-whiz examples, but I think I’ll just wrap up by saying I’m with Pollan when he suggests in his foreword that “Brilliant Green”

is, like the best science, the product of a powerful imagination, one with the ability to see the world from a completely fresh and unencumbered point of view…. So, put aside for a couple of hours your accustomed anthropocentrism, and step into this other, richer, and more wonderful world. You won’t regret it, and you won’t emerge from it ever quite the same again.

How many senses do plants employ? More than animals or people, it seems