If you’re interested in invasive carp and how they’re menacing the Great Lakes, I have a new book to recommend. Even if you’re already well-read and up-to-date on the subject. Even if — make that, especially if — you think you understand how we arrived at this crisis.

The book is “Overrun: Dispatches From the Asian Carp Crisis.” The author is Andrew Reeves, a younger Canadian journalist who has earned respect and awards as a contributor and editor at some good magazines.

Back in 2012, Reeves was a legislative reporter for the Toronto Star when he noticed a news item about invasive carp — specifically, about an $18 billion project of the U.S. Army Corps of Engineers to keep these high-breaching stars of popular video clips from leaping out of the Mississippi River system and splashing down in the Great Lakes.

Reeves read up on the issue and, to his enormous credit, resisted the newspaperman’s typical reflex to take a pass on a story that had already been done to death by scores of other journalists, most turning out rather quick and narrow treatments (myself, alas, included).

Six years later, after a series of site visits, scores of interviews and unenviably long hours poring over paper, he has emerged with the prize: A book that demonstrates convincingly how this “crisis,” decades in the making, was no unforeseeable convergence of accidents and errors.

It resulted instead from the deliberate and amply informed actions of entrepreneurs, scientists, environmental regulators and other knowledgeable if incautious actors. We might say they should have known better, except that in so many instances they manifestly did know the risks — and brushed them aside.

Maybe you’ve heard a very different origin story: A series of unfortunate mistakes and misjudgments let a species imported from another part of the world get loose into ours, etc. Like the starlings, perhaps, or buckthorn. 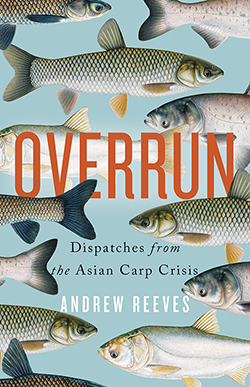 You hear this version still. A few months ago, for example, in an otherwise good story in the usually good enough Toledo Blade, a reporter explained the roots of crisis this way:  “Bighead and silver carp escaped from fish farms and sewage retention ponds during periods of flooding, and have been on a relentless march throughout the Mississippi River system for decades.”

To be sure, “Overrun” is no mere history project. It’s also an up-to-date threat assessment and a deft explanatory treatment of control techniques; the need for cooperative management policies (and their obstacles); and such scientific advances as carp-tracking through eDNA, which allows scientists to monitor the invasives’ spread by sampling, say, their excreta.

The more familiar territory for general readers may be the recent detections, confirmed or disputed, of bighead, silver and black carp in new and treasured places of the Great Lakes basin; this gets up-to-date treatment in “Overrun,” informed by travel and firsthand observation.

If you  are a complete newcomer to the topic, still in the dark about the different species (or even about there being more than one “Asian carp”), Reeves will catch you up. And should you already be familiar with the various types and their distinctions, engaging passages like this one may leave you glad to be reintroduced:

Bigheads strike a prehistoric pose, as though forgotten by evolution. Large, wide-set eyes sit low on bulbous heads, their mouths hanging in a perpetual frown. In rare cases, bigheads reach 140  pounds and 7 feet in length, though 40 pounds and a length of 28  inches is standard — still big by American freshwater ﬁsh standards. Silver carp also sport frowning mouths and scaly heads,  heads that are, comparatively speaking, less bulging than the aptly-named bighead. They shade from silver and caramel-colored  to olive green and can grow to 100 pounds, though 30 pounds is routine….

There is a fourth member of the Asian carp family — the black carp. They are equal to grass, silver and bighead carp in their voracious eating habits, though they eat snails and mollusks, including  numerous endangered North American mussels. An average black  carp weighs in at 35 pounds, though they too are capable of reaching tremendous sizes.

But for this reader, at least, the most compelling news in “Overrun” concerns all the old news we never got, or got from sources that got it wrong.

In “Overrun,” you will meet Jim Malone, the producer/promoter who may have done more than any other individual to spread grass carp across the country as a control on aquatic weeds. Also, “Jim B,” his son and successor who still produces the fish on a reduced scale, and defends his father’s legacy against harsh hindsight.

You’ll visit Arkansas academics and hatchery managers who imported the first grass carp and, in 1966, produced the first American-born offspring; in a little over a decade, hatcheries were doing the same in 16 states and, with the blessings of government,

(This was thought to be a good thing.)

You’ll meet David Mitchell, an Arkansas-based U.S. Fish and Wildlife agent in those days, who makes the case that grass carp got into wild, public waters not just from heavy rains or careless handling by commercial operators, but also from federal facilities with inadequate confinement practices.

You’ll meet Scott Henderson, who came to head Arkansas’ Game and Fish Commission, but started out studying the use of silver and bighead carp — nowadays, the species most dangerous to ecological balance in the Great Lakes — to clean up the sewage lagoons at wastewater treatment plants by, essentially, eating the poop. (This was an approach whose economic viability rested on selling the fattened fish for food, and foundered on belated realization of “the public’s lack of interest in eating fish raised in sewage pools.”)

And though you will not quite meet the victim, you’ll learn that

It was at Auburn that the ﬁrst recorded instance of an American being struck by a leaping Asian carp occurred when a grass carp jumped a seine net and knocked the son of Homer Swingle, future head of Auburn’s Department of Fisheries and Allied Aquacultures, to the ground.

So this is history with a sense of humor at times and, more important, a sense of fairness throughout. For all his passion about the mess we’re in, and the worse mess ahead when bighead and silver carp establish themselves in the Great Lakes, Reeves is appropriately dispassionate in seeing acts and actors of the past through the lenses of their times, not ours.

He gives gracious acknowledgement to the carp proponents’ arguments that controlling aquatic weeds with voracious carp was a better solution than poisoning the water with herbicides. It was a time of new environmental consciousness, he notes, raised by Rachel Carson especially, and also of new antipollution laws including the Clean Water Act, with its requirements that cities build expensive infrastructure for sewage treatment. Here the prospect of using low-tech, nontoxic fish as a treatment tool had an obvious and understandable appeal.

Overall, “Overrun” presents a saga of human short-sightedness, not evil, of generally well-meaning if self-blinkered operators trying to solve difficult problems, usually in good faith — but, in the end, leaving to us “the guilt we feel for having let the natural places we love, and purport to treasure, go to shit.”

We see our ruinous handiwork in the spread of invasives and sense the shame in our hubris, ignorance and failed best intentions. And so it’s here,  at the intersection of science, politics, economics and the ecology  of Asian carp in North America, that we can discover how a single unwelcome ﬁsh has changed how we think about invasive species,  binational and bipartisan cooperation on the environment and the fate of our rivers and Great Lakes.

In the places where Reeves looks to the future, there is a measure of conditional optimism: The threat to the Great Lakes can be tackled, must be tackled, will be tackled — if we can find the will to do the work and spend the money. If we can accept that the carp invasion cannot be reversed or raised — only managed, limited, and endured.

Also, perhaps, if we can get a better grip on that hubris thing.

Reeves will be in Hudson on Wednesday for a reading and discussion of “Overrun,” organized by the St. Croix River Association, at the Hop and Barrel from 5 PM to 7; I’ve volunteered to moderate the Q&A portion.