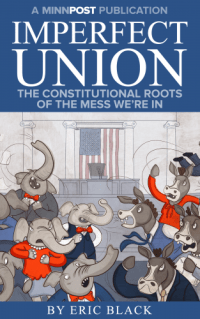 Imperfect Union: The Constitutional Roots of the Mess We’re In

Americans are sick of the gridlock that paralyzes our national government, and they spread the blame to various individuals and institutions.

But in his new book, journalist Eric Black argues that Americans are unwilling to recognize the role played by the Constitution itself , because they have so much respect for that document and the men who wrote it. Yet it is our beloved Constitution, written to solve the political problems of its time, that gives us a Congress and a Presidential election process detached from the principle of one-person, one-vote, an unelected Supreme Court with extraordinary power over both the laws and the way our political system works, and an amendment process that makes it almost impossible to change the two-century-old words that drive our system. That’s why other nations trying to forge or improve their democracies no longer turn to the founding document of ours for guidance.

Eric Black is national correspondent for MinnPost, a nonprofit news site for Minnesotans, and a former reporter for the Star Tribune in Minneapolis. “Imperfect Union” is now available as an e-book for $1.99 from these sellers: