In the entryway of Chandler Industries, just north of downtown Montevideo, a framed newspaper clipping from the local newspaper, the Montevideo American-News, hangs on the wall. Yellowed by the years, it announces the company’s 1969 expansion in this southwest Minnesota town of 5,300.

Over the half-century since, Chandler has been a stable employer, with nearly 100 people working at its plant here, one of several facilities the company operates in Minnesota (along with another in Mexico) that manufacture stainless-steel machine parts for the energy, aerospace and medical industries.

But these days, Chandler — like businesses across Greater Minnesota — has had to operate short-staffed at times. When the company recently went looking for an operations manager, it cast its net near and far, advertising in local newspapers, on Craigslist, on the job-search website Indeed. It still took six months to fill the position.

It’s become a common lament for employers in this part of the state, one that doesn’t just affect manufacturers. In Appleton, 25 miles up the road from Montevideo on U.S. Route 59, the Upper Minnesota Valley Regional Development Commission, a nonprofit that works with cities and counties on development projects, just recently hired someone for an open position. Until then, the agency had at least one open position for four years.

In fact, across this region, employers are dealing with a troubling trend: As Minnesota’s rural economy continues to recover from the Great Recession, many busineess and nonprofits are primed for growth – but are operating short-staffed or holding back on expansion due to concerns over finding enough workers. 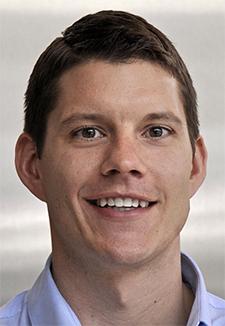 “People in both rural areas and the Twin Cities maybe don’t have a realistic view of the opportunities statewide,” said Luke Greiner, an economic analyst for the state Department of Employment and Economic Development. “They view the Twin Cities as an island of opportunity and rural Minnesota as kind of shrinking by the wayside. That is a big perception problem.”

That problem is especially acute in Southwestern Minnesota, a region Greiner has called the “canary in the coal mine” when it comes to workforce and economic development issues — a place that offers a sneak peak at both the looming challenges, and unique opportunites, facing communities throughout Greater Minnesota in the years to come.

In Montevideo, the Chippewa River empties into the Minnesota River as it flows southeast, toward Granite Falls and New Ulm and on to Mankato. On a late summer morning, the fields in the area stand tall with head-high corn and shimmer with green waves of soybeans. Soon, hunters will arrive at Lac qui Parle State Park and its massive reservoir, home to thousands of migrating Canada geese. The nearby hamlet of Watson, population 205, claims the mantle as the “Goose Capitol of the USA.”

In his writing and in person, Greiner, who studies the region in his work for DEED, emphasizes the underappreciated job opportunities across the region (which, for DEED’s purposes, consists of 23 counties in a triangle bordered by South Dakota, Iowa and, basically, the Minnesota River). 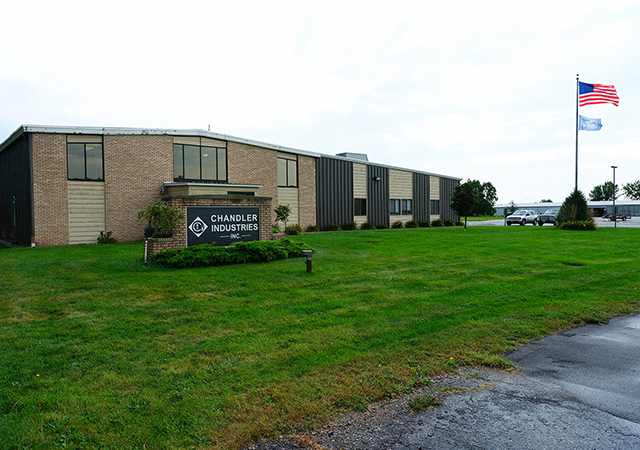 According to a recent agency report, southwest Minnesota had about 6,500 job vacancies in the fourth quarter of 2016 – well above its 16-year average. Moreover, median wages “offered” (the wages employers advertise when looking for workers) between 2011 and 2016 increased by $2.26 per hour in the region – a jump that was also notably higher than the statewide average. And while the median wage offer was just $13.41 per hour during 2016, a quarter of those openings had wage offers of nearly $18 per-hour or more, according to the report.

Nor are the opportunities only in manufacturing. Jobs in southwest Minnesota are available in a variety of fields, from health care to retail to construction to the region’s two largest industries: agriculture and manufacturing. 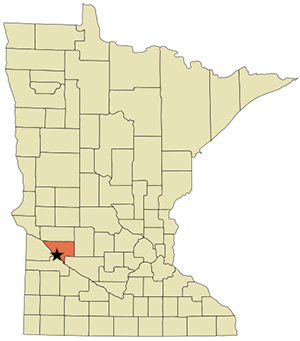 Filling those positions, however, is another matter. One recent survey shows that while manufacturing executives in this part of the state have an optimistic view of the economy, they worry about their ability to attract the workers they need to grow. Commissioned by Enterprise Minnesota, an organization that represents manufacturers, the survey asked 400 manufacturing executives in Minnesota to identify their “biggest challenge,” giving them several options to choose from, such as “rising health care and insurance costs” and “weak economy and lower sales for your products.”

In southwestern Minnesota, 57 percent of the executives who responded to the survey identified “attracting and retaining a qualified workforce” as their biggest concern — the highest percentage for that category among the six Minnesota regions measured.

Bob Kill, the chief executive of Enterprise Minnesota, noted that, historically, companies looking to build new facilities or relocate their operations often solicited economic incentives, like deferred taxes or cheap land as sweeteners — goodies that small towns eagerly offered. These days, he said, the first question potential employers ask when they consider locating somewhere new is a different one: “Do you have enough workers?”

The old ways are no longer enough

While the open spaces and natural beauty of the prairie have always been one of this region’s best draws, its scattered towns and villages can feel remote – far from the Twin Cities, void of the clustered lakes that draw tourists to other parts of the state. After growing up, many young people leave here. Between 2000 and 2016, just five of the region’s 23 counties gained population and the percentage of people over the age of 65 is higher than the state average.

Yet business and civic leaders see other factors behind the worker shortage, including a dearth of decent housing; concerns over the quality of internet service; and the lack of training – especially for the kind of workers who make factories hum: welders, machinists and other skilled workers. More recently, businesses have begun citing another issue in attracting workers: the lack of day-care options in small towns.

Greiner, who plans to share his latest data at a gathering of business leaders in Montevideo later this month, said the situation calls for “some creative out-of-the-box thinking” on the part of both government and the private sector. 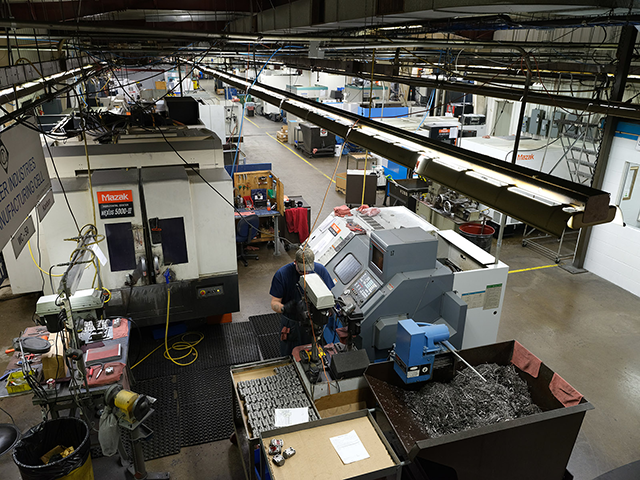 MinnPost photo by Mike Dvorak
Chandler has been a stable employer, with nearly 100 people working at its plant.

Kill, the Enterprise Minnesota executive who has been reviewing the manufacturing sector at events across the state this summer, including the Coalition of Greater Minnesota Cities annual conference in Fergus Falls, agrees. In an interview with MinnPost, he said the insularity that many rural manufacturers have long enjoyed – going about their business in industrial parks, out of the news, confident of a stable workforce – is no longer enough. Going forward, he said, “They have to do their part. More and more, both large and small companies realize that they have to recruit and market.”

That’s already happening in some places. In one recent initiative, the Willmar Workforce Center worked with Hennepin County to bus about 100 job seekers from the western Twin Cities suburbs to southwestern Minnesota for a tour of businesses, including Chandler Industries. And Kill pointed to an example in Hutchinson, in McLeod County (just outside DEED’s southwest region), where the city and local manufacturers have invested $1.2 million in a technical education wing at the high school that will give students an apprentice-like experience in manufacturing.

In Appleton, the UMVRDC has just begun work on trying to alter some of the perceptions of the region, creating what Executive Director Dawn Hegland calls a “regional attraction plan”: an effort to present the region, largely through digital media, to people who are considering a move to rural areas. The initiative will build on the work already being done by Western Minnesota Prairie Waters, a marketing initiative whose logo is an image of Minnesota with the words “Get Rural.” 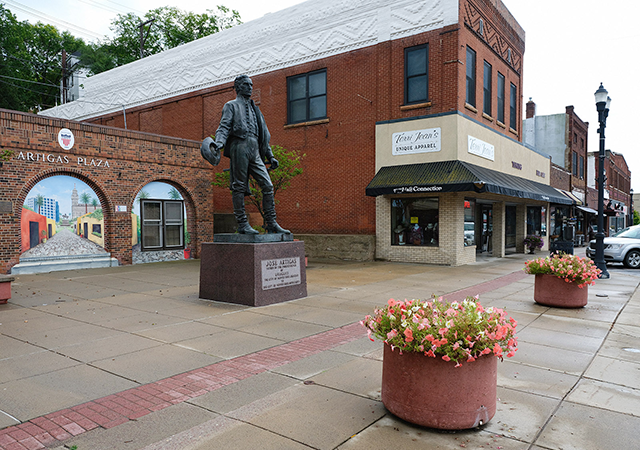 MinnPost photo by Mike Dvorak
A statue of José Gervasio Artigas, a national hero of Uruguay, stands in downtown Montevideo, a gift from the citizens of Montevideo, Uruguay.

More visibility would help. When her agency was hiring, Hegland said, some open positions got no applicants at all. They advertised in newspapers and on social media, re-named the openings, hired a job placement service. The search was made even more challenging because many candidates needed to have college degrees, experience in community planning or similar areas and, hopefully, some knowledge of the region.

Hegland, with a resigned laugh, said her recruiting efforts sometimes amount to “guerrilla marketing”: talking about the agency’s job openings with just about everyone she encounters in this town of 1,400 residents. “Every time I am at a meeting, it seems like I ask, ‘Who do you know that might be right for this?’ ”

‘We have to control our own destiny’

It’s a cool summer morning in Montevideo, and at Chandler Industries, bordered by a cornfield on one side and Sunset Memorial Cemetery on another, about two dozen vehicles are in the parking lot. Inside, a shaven-head worker in cargo shorts and boots is checking his weight, part of the company’s efforts to promote healthy living. He proudly recorded the loss of six pounds.

Inside the cavernous manufacturing wing, machinist Tom Goschey works at a lathe, making what he called “knuckles,” hockey puck-size stainless steel discs used in valves and other equipment in the gas and oil industry.

Goschey, a Montevideo native, went to work for Chandler in the 1990s. He has family in town, a bond that has kept him from looking elsewhere for work. “Besides,” he said, “I love doing what I do, and there are good people around here.” 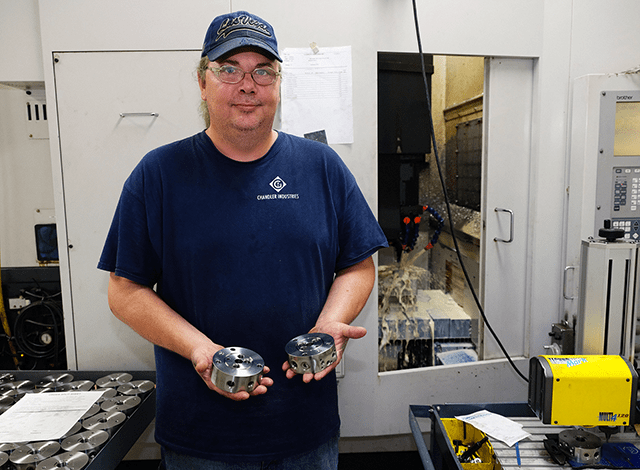 MinnPost photo by Mike Dvorak
Tom Goschey works at a lathe, making what he called “knuckles,” hockey puck-size stainless steel discs used in valves and other equipment in the gas and oil industry.

Jacque Peters, Chandler Industries’ human resources manager, said the company realized several years ago that the region’s demographics presented challenges and that it would have to take steps to shore up its workforce.

For a time, Chandler recruited graduates of a machine tool program at Minnesota West Community and Technical College, which has a campus in nearby Granite Falls. When that program closed, the company hired one of the school’s retired teachers to train its workers.

More recently, the company received a $275,000 matching grant from the state, which — in conjunction with a Minnesota school — it will use to train workers over the next three years.

The company has also connected with high schools – even junior highs – to let students know about the career opportunities in manufacturing and how the industry has become a highly technical field, with workers running complicated, computerized equipment.

“We realized long ago that we would have to grow our own,” Peters said. “We have to control our own destiny.”