Ben Butcher and his wife live on a small farm on the outskirts of Backus, Minnesota, where they raised their four kids. He used to work as an automotive mechanic, which is where he got his first experience working with direct current — the kind of electricity that comes out of solar panels. These days, Butcher works with a lot more of it — kilowatts, in fact — as a solar installer. Like a growing number of people in the state, he makes his living directly from the sun.

Butcher works as the construction manager for Real Solar, a subsidiary of the Rural Renewable Energy Alliance, a nonprofit that focuses on getting solar to low-income households. The organization employs 14 people, including between four to six solar installers, depending on the season and demand. Their crew might take three days to put in a 15-kilowatt solar array, or just a day to put in a 2-3 kilowatt system. These days its services are in higher demand than in the past, as the solar industry booms across the state, including rural areas like the one around Backus.

With new tariffs announced by the Trump administration and an energy market in constant flux, the solar economy faces a degree of uncertainty. But in Minnesota the sector is stronger than in most states. Last year solar jobs dropped 4 percent nationwide, while in Minnesota they rose 48.2 percent to a total of 4,256, according to the Solar Jobs Census. That’s far more solar jobs than in any of our neighboring states, including Wisconsin, where they increased just 3.9 percent (to 2,921 jobs), Iowa (up 44.6 percent to 815 jobs), South Dakota (up 1.5 percent to 485 jobs) and North Dakota (down 16.7 percent to 145 jobs).

Minnesota’s solar growth is, in fact, one of the desired effects of the Energy Omnibus Bill passed in 2013, which mandated more solar production and made it easier for independent power producers to feed energy into the grid. It also kickstarted Xcel’s Community Solar Garden Program, which has seen the number of small solar arrays skyrocket. In 2013, there were only about 13 megawatts of solar power in Minnesota, according to Eric Pasi, the chief development officer at IPS Solar. At the end of 2017 there were 744.4 megawatts (including 436.8 that were added that year).

“By 2013,” said Pasi, “in 22 years of solar development, [IPS] had cumulatively installed about two megawatts of solar power statewide. At the end of this year, five years later, it will be close to 100 megawatts, and we’ll have completed 35 community solar projects, the vast majority in rural areas.”

Solar is just one of the clean energy sectors that are growing fast across the state, alongside wind power and energy efficiency. In 2016 there were some 57,351 so-called clean energy jobs, most of which were in energy efficiency. But the number of positions in wind and solar are rising, too, which could mean good things for rural parts of the state as they transition from energy importer to exporter.

Pasi cites other economic benefits from solar besides employment. For example, in 2016 IPS built a 5 megawatt solar garden in Red Wing. Building the array meant about 50 construction jobs, but once the installation was finished it didn’t need much maintenance — just one half-time position doing vegetation control, snow removal and monitoring production. At the same time, the school that owns the land will still earn around $7 million over the next over 25 years in saved energy costs and from leasing the land.

Farmers, too, are finding that by putting solar panels on their barns, or in their fields, they can earn up to two to three times as much as planting crops on the same land, while also lowering their electric bill.

“Dairy uses more power, because of all the milk processing, and all the chillers,” said Micah Johnson, the operations manager of Solar Connection, a solar installer in Rochester, which does about half of its installation on farms. “In those cases we can’t always eliminate the entire electric bill. But there have been a lot of big grain farms where they have completely eliminated their bill.”

Businesses have found the same benefit. In Byron, Minnesota, Tony Wintheiser and his father, who own Hentges Glass, made a similar calculation when they had to relocate their facility from Rochester.

With the help of Solar Connection, they applied for a no-money down, low-interest loan for around $100,000 through the MinnPACE program run by the St. Paul Port Authority, and built their new buildings with a solar array on top. The estimated payback time is eight years.

“We’re very happy with it.” Wintheiser said. “Any time we’re overproducing, the energy trickles on the grid. Any time we’re underproducing, it trickles off. In the winter months we had some small bills, but this last quarter we got a check for $1,500.”

Given these benefits, and the state support, the solar explosion in Minnesota is not surprising. But, as in any new market, there have been growing pains. Many installers complain that they can’t get enough labor for the demand. They cite a State Board of Electricity rule that solar construction is considered electrical work and must be staffed at a ratio of one licensed electrician to two unlicensed ones. With increasing demand on the number of Journeyman and Master (i.e “licensed”) electricians, they say this is effectively a bottleneck on growth and employment.

Blattner is a heavy construction company based in Avon, Minnesota. It was founded in 1907, and is now the largest solar installer in the country. (Another Minnesota company, Mortenson Construction, is fourth largest.)

“What Minnesota is really known for are the smaller, 5 to 10 megawatt community solar projects” said Stephen Jones, vice president of solar for Blattner. “But we’ve also got a few solar projects that are 90 megawatts plus, down near Marshall. … Any projects that we build today, we go to the local labor force to hire the people. And a lot of them become long-term employees for Blattner.”

But in Minnesota, because of the required ratio of one licensed electrician to two unlicensed ones, it can be difficult to find enough electricians in rural areas, so they often have to bring in people from states that have reciprocity with Minnesota.

“It’s hard to find local people,” said Ken Hilgert, vice president of business development, who notes that while a “large majority” of the people Blattner hires are Minnesota journeyman and apprentice electricians, many contractors have to bring people in from states Minnesota has reciprocity with.

“The numbers are staggering,” said Hilgert, “how much personal income is leaving Minnesota right now. I know one contractor who just hired 65 people, journeymen and apprentices, and all but two were from out of state. All that income is going to buy a car in Nebraska or Colorado or Arkansas.” 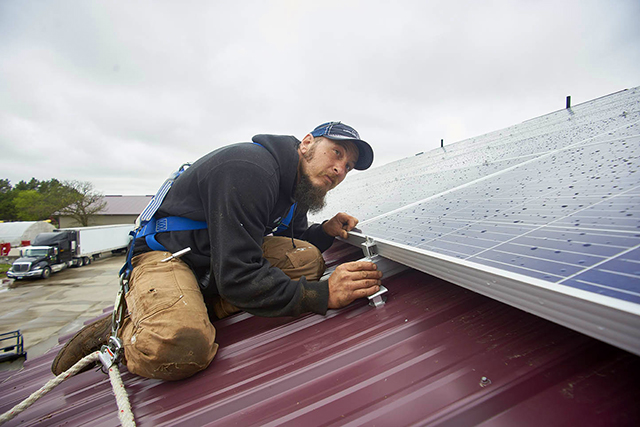 MinnPost photo by Tony Nelson
Ben Butcher: “We’re actually looking for another electrician at the moment. But solar electricians are in very high demand right now.”

Pete Lindahl, a journeyman electrician, the business manager of International Brotherhood of Electrical Workers Local 292, disputes claims that there are not enough licensed electricians in the state. “We have not experienced a shortage,” he said. “We have filled the calls that are necessary, and our jobs have been getting done on time. I have not heard anything that’s been adverse to that.”

While the state doesn’t keep track of what kind of electrical work these out-of-state electricians do, the fact that the numbers began to increase alongside the solar boom suggests many of them are likely working in that sector.

Blattner and other installers chafe at the electrician-ratio requirement, saying it can raise labor costs as much at 15-20 percent on a project, and that the problem is unique to Minnesota, which has become an “anomaly in the industry.”

“The panels come in boxes. To take a panel out of a box and set it on a rack you have to be an electrician,” Hilgert said. “I need to have one journeyman and two registered electricians to do work that, in most other parts of the country, is labor work.”

For Lindahl, who is on the State Board of Electricity, the 2-to-1 ratio is a safety issue, a quality issue, and a training issue. “Some people say, ‘Well solar’s really easy. It’s not a hard thing. A trained monkey can do it.’  That’s so wrong. The minute you take a solar panel out of its crate, that panel is hot. It’s generating electricity the minute it’s exposed to the sun. And in a lot of cases that’s more dangerous [than standard wiring], because other wiring isn’t hot all the time.”

A bill has been introduced by Sen. Karin Housley to do just that. Senate File 3483 would keep the 1:2 ratio for some aspects of installation, and raise it to 1:3 and 1:5 for others.

“We are not in favor of changing the ratios at all,” Lindahl says. “In fact, if we were interested, it would be going the other way, so it would be one journeyman to one unlicensed, not more than that.”

Meanwhile, installers like Real Solar struggle to keep up with the demand.

“Since we’re really focused on empowering low-income people,” said the Rural Renewable Energy Alliance’s program development specialist, Erica Bjelland, “[the ratio] makes it difficult for how many people we can have train on a job site.”

“It’s a little tough now,” said Butcher, “because with the building market going back up, a lot of electricians are pretty happy where they are just doing standard house wiring.”

But one thing everyone agrees on: As fossil fuels fall behind both wind and solar on cost — even apart from social and environmental concern — Minnesota needs to stay ahead of the curve.

“Hardly anybody is building coal anymore,” said Johnson. “It’s just not cost competitive anymore. We talk about putting coal miners back to work, but the reason coal miners aren’t working is not because anyone is trying to kill it. It’s strictly market forces that are killing coal. That and the fact that nobody wants it in their backyard.”

On the other hand, almost everyone — developers, farmers, installers, unions — do want solar in their backyard.

“We need to get this stuff going so we can improve our environment and improve the grid,” said Lindahl. “We’re in this for the long haul.”

“Minnesota got a great workforce, a great work ethic,” says Hilgert. “Everybody wants to work here. We’ve got Minnesota nice. We’ve got good people. And the opportunity is here to have a little boom, if we do it right.”