A family gets behind on rent. They get a notice — it’s pay up or face eviction. And then they end up in court. Many times, the place they’re living is already the last resort, the only thing standing between them and homelessness.

It’s a scenario that plays out all too often in big city neighborhoods in Minneapolis and St. Paul. But it happens in smaller, more rural places too. Non-urban counties, where rental housing is scarce to begin with and services are fewer and further between, can have eviction rates that are on par with — or exceed — those of the big cities.

One county experiencing high rates of families facing eviction is Le Sueur. At 28,000 people, it’s Minnesota’s 38th most populous county. Yet from 2013–2016, its average annual rate of eviction filings was third highest, trailing only Anoka and Ramsey counties.

Many on the margins

Gene Lewis has been a landlord for more than 40 years and has around 100 properties across Minnesota, including some in Le Sueur County.

More than in the past, he says he struggles to find tenants who take care of his properties. These days, he said, he spends thousands of dollars between tenants to fix up units, and the day before he talked to MinnPost, he and an employee spent hours removing trash from the yard of one of his units.

Lewis says he tries to be understanding, but more tenants today don’t pay their rent on time.

“I would say 40 percent of them are behind on their rent right now,” he said.

He’s had to evict many tenants over the years, but things have gotten worse in the last decade or so, he said.

Lewis is not the only landlord in the area who has gone to court to evict tenants.

From 2013–2016, an annual average of 3.4 percent of Le Sueur renter households were hit with eviction filings, according to the Eviction Lab, a new national database on evictions. Eviction filings are the first step a landlord makes in the legal process to remove a tenant. They don’t always result in a formal, court-ordered eviction, but they often result in a settlement that means the tenant has to get out, often with a mark on their record that will surface in the background checks required to rent another home.

The overall number of eviction filings — an average of 66 per year in that four-year period — is relatively small; Hennepin County, home to Minnesota’s largest number of renter households, had an annual average of 5,400. But compared to the number of renters in Le Sueur, less than 2,000 households, that rate competes with Twin Cities metro area counties.

Anoka County, in the northern suburbs of the Twin Cities, had the highest rate of eviction filings, at 4 percent, and Ramsey County had the second highest at 3.6 percent. In Hennepin County, the average annual rate was 3 percent in that time period.

When it comes to formal eviction — when a court actually orders tenants to leave — Le Sueur also had the third highest rate of any Minnesota county, at about 1.7 percent of rental households.

Another report, out last month from Minnesota housing nonprofit HOME Line, got different numbers as far as county-by-county eviction rates go but nonetheless found that they happen in some Greater Minnesota counties with the same — or greater — frequency than they do in the metro.

The report found that three months’ rent, or about $1,500, typically stands between tenants and eviction in Greater Minnesota. 89 percent of Greater Minnesota evictions were due to nonpayment of rent.

At first glance, it’s hard to understand why Le Sueur County residents would face relatively more evictions than people in other Minnesota counties. The share of the population in poverty is near the state average; its unemployment rate a bit higher. Incomes, while not at the top of the pack, aren’t near the bottom either.

But Le Sueur County has seen the gap between renters’ income and their monthly rent widen more than it has in other parts of the state, according to the Minnesota Housing Partnership. Median rents in Le Sueur County rose 16 percent between 2000 and 2015, while the median renter’s income declined by 13 percent. Statewide, median rents increased by 9 percent, while median income has declined 11 percent.

“Times are tough. The margins right now between lower income people and the cost of housing — it’s getting tighter and tighter. The potential for having a bad month here or there is much higher than 15 years ago,” said Jasper Kruggel, Le Sueur city manager.

Others echoed that sentiment. 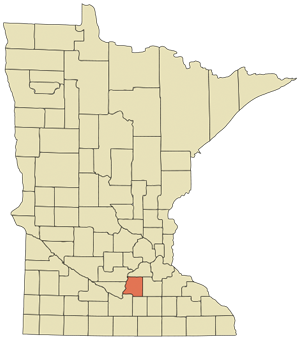 “I would suspect that the higher rate in Le Sueur County may just be because it’s a little bit of a lower income county, and so in my experience evictions — probably 90 percent of the evictions that I do are nonpayment of rent,” said Silas Danielson, an attorney who represents landlords in Southern Minnesota counties, including Le Sueur.

On top of that, officials say, the area is facing an acute shortage of affordable housing.

Le Sueur County, sandwiched between Mankato and the Twin Cities metro, has seen pressure on its housing stock as people seek a place to live with more affordable rental properties, said Judd Schultz, the housing director at the Minnesota Valley Action Council, a nonprofit that administers rental assistance through the federal Section 8 program in Le Sueur County.

In such a tight housing market, “Landlords, they’re not worried about filling that unit if they have to evict somebody,” Schultz told MinnPost.

Evictions can hit differently in small towns and rural areas than they do in big cities.

For one thing, rural areas don’t have the same infrastructure big cities do. Hennepin and Ramsey counties have housing courts, with judges and advocates who specialize in housing issues. There are more services for low-income tenants, like shelters and advocacy groups, in the metro.

Many of the landlords in places like Le Sueur County are not major property management companies, said Peter Hemberger, an attorney with Southern Minnesota Regional Legal Services. And some of them — if they didn’t own property — would probably have low enough incomes to be represented by Hemberger and his colleagues.

“There’s a lot of poverty in rural Minnesota, there’s a lot of housing that’s in disrepair … a lot of times small towns and rural areas, the only option is going to be older buildings, older homes, single-family homes that are not in great shape and need a lot of repairs,” he said.

Sometimes, he sees tenants withhold rent when a landlord won’t make repairs — which can constitute a breach of lease and lead to eviction.

There’s another thing that could be in play, several who work in the housing arena in the area said: In the city of Le Sueur, the county’s biggest town at 4,000 people, an ordinance made it a landlord’s responsibility to pay a utility bill if a tenant does not.

In one year, the city had accumulated $55,000 of uncollected utility bills who had left town without paying, the Le Sueur News-Herald reported.

“In order to get a rental license, they have to agree the landlord is responsible for the utility bills … if the landlord refuses to pay them, we certify them to the tax roll through the county so they go (on a landlord’s) property taxes,” said city administrator Jasper Kruggel. If they don’t pay their property taxes they run the risk of going into tax forfeiture.”

The ordinance may encourage landlords to evict tenants before utility bills mount.

Data from the Eviction Lab and HOME Line, don’t conclusively show an uptick or a downturn in eviction filings in the years since the policy took effect, but that doesn’t mean there wasn’t one.

Eric Hauge, HOME Line’s executive director, and Samuel Spaid, its research director, said it’s very important to note that when it comes to evictions, numbers don’t capture the whole picture. Eviction filings don’t always result in formal evictions, but they often result in settlements that force tenants to move. In some cases, there are no records of an eviction because it never reaches the legal system: Landlords tell tenants to leave and they do.

Tip of the iceberg

Eviction is a formal legal process that leaves a paper trail, but in many cases, families, for one reason or another, have to move without the case touching courts, making the numbers unknown.

“The number of involuntary displacements that are happening is a number that really is impossible to figure out,” Spaid, of HOME Line said.

In previous research, Matthew Desmond, the author of the 2016 book “Evicted” and the head of the Eviction Lab, found that one in eight renters in Milwaukee had been evicted or forced to move involuntarily for another reason — a much higher share than is reflected in court records.

These types of moves can throw lives into disarray. Because eviction most often happens to low-income tenants who face more limited housing options and tighter cash supply in the first place, eviction compounds other problems.

However flawed the data, part of the Eviction Lab’s goal in providing county-by-county and place-by-place statistics on eviction was to show that evictions happen everywhere.

“You’ll read about affordable housing and gentrification in Brooklyn and Silicon Valley,” said Adam Porton, a researcher with the Eviction Lab. Less so in rural places, though some of the same factors — that wages haven’t kept pace with inflation even as rents go up — are at play.