City Administrator Dana Lietzau looked out the window of her office and counted the empty buildings along First Avenue, the street that runs through the business district of Gibbon. Twelve buildings, four of them empty.

“Our downtown is really struggling and has been for a while,” she said. “The question is: ‘How do you find businesses to come here?’ ”

The answer that landed one entrepreneur is clear: high-speed internet access.

Like many rural towns in Minnesota, this village of 750 people in Sibley County has the standard fare of small businesses: a hardware store, a bank, an auto repair shop, an insurance agency, two bars. Also, like many small towns, it has few retail outlets. The grocery store closed years ago.

So when Adam Stegeman, an engineer with a background in 3D printing technology – a growing form of manufacturing – opened a 3D printing business in an old bank building here, residents took notice. “Any employment in this city is huge,” Lietzau said.

Stegeman has been filling orders steadily ever since, though, he acknowledges, time will tell whether the business, Advocate3D, has long-term staying power. But the presence of a new business along the city’s main drag – and a high-tech one, at that – has generated some buzz in the community.

After two weekly newspapers in the area wrote stories about Advocate3D, residents and other business owners began to stop by to see just what this new technology was all about. A few farmers even stopped by, curious to see whether Stegeman could design any parts for machines. “I’m a bit of a teacher, being in high-tech in a small town,” he said. 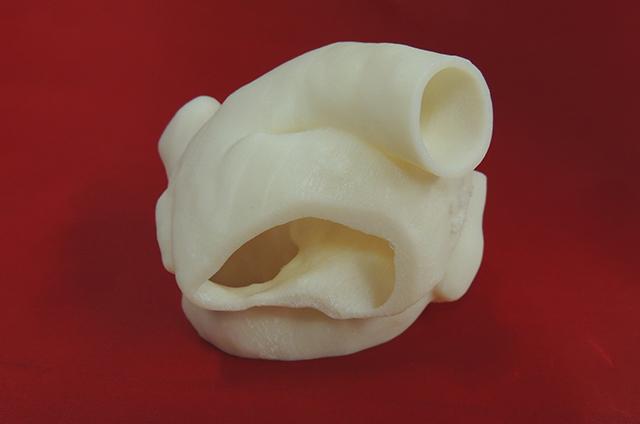 Stegeman looked at commercial buildings in several cities when he began to think about starting his own business. He had hoped to locate in Gibbon (his family lives eight miles north of town), but he first needed to make sure that the town had reliable broadband Internet access, which he needs for downloading 3D design files.

It does. Gibbon is one of several cities and townships in Renville and Sibley Counties that got together a few years ago to create RS Fiber, a cooperative that has brought broadband Internet access to thousands of people in this region.

“That was absolutely huge,” Stegeman said.

Stegeman, who studied electrical engineering at Minnesota State University, Mankato, has worked in the 3D printing industry for several years. Most recently, he sold 3D printers for Hawk Ridge Systems, a Brooklyn Park-based company. He also worked in sales and engineering for five years for Eden Prairie-based Stratasys, traveling to Israel, Turkey, Brazil, Mexico and other countries – as well as, he said, “more U.S. states than I can recall accurately.”

When he wasn’t traveling out of state, Stegeman spent a lot of time driving to the Twin Cities – either to check in at company headquarters or to service clients who were buying 3D printers.

It was a solid career – one, Stegeman said, that was difficult to set aside in the pursuit of his own business. “I gave up a really good career in sales to do this,” he said. “It was tough walking away from a good, guaranteed salary.”

But with three young children, he was looking for something that offered more control and less travel. He and his wife, Jill, didn’t want to give up the small-town life they had always known. (Adam grew up in Hutchinson, while Jill is from Canby).

“There was no way we were going to move into an urban area,” he said.

Stegeman had talked about his business aspirations with a friend, Corey Theis, a Gibbon resident who owned the bank building after buying it from the city. Eventually, Stegeman arranged to rent space in the building and start his business.

On a recent afternoon, Stegeman sat at a conference table inside Advocate3D, beneath a large flat-screen TV that he uses during demonstrations and conference calls. The 3D printers stood against the walls. In back, behind a makeshift receptionist desk, an old bank vault stood open — used, for now, for storage. 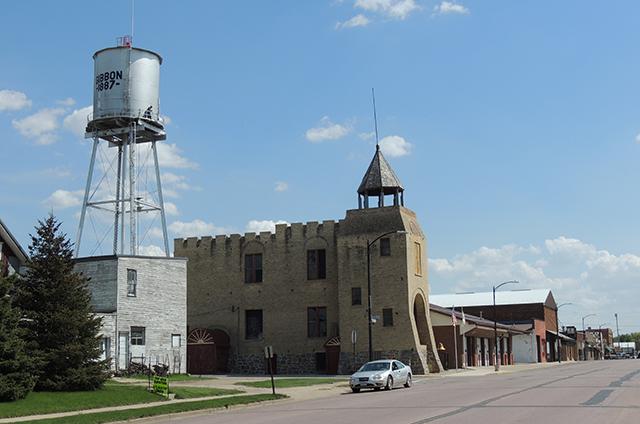 MinnPost photo by Gregg Aamot
Gibbon Village Hall, which is on the National Register of Historic Places, borders the north end of Gibbon’s business district.

Reflecting on his decision, he said: “The technical side of this was a no-brainer to me – that and sales.” It was the financial side that posed a challenge, but he put together a business plan and got a loan from a Hutchinson bank to help with the purchase of his printers, which are collectively worth about $400,000. (He leases one of them from a friend in the industry).

Tom Schafer bought Gibbon Lumber & Hardware, which is located just up the street from 3D Advocate, in April. He was glad to see the addition of a new business.

“It’s great,” he said. “We need businesses to fill up Main Street. That’s what we need – young people like Adam to come in and try something new.”

Stegeman characterized 3D printing technology as “somewhere between emerging and mainstream.” The technology has been used to make everything from robots and prosthetic limbs to custom shoes and musical instruments. 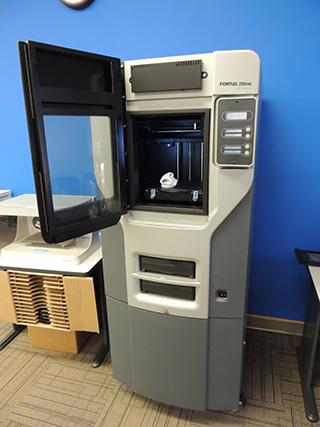 MinnPost photo by Gregg Aamot
One of Advocate3D’s printers is this Fortus 250mc, which was built by Stratasys, an Eden Prairie company.

Despite the name, 3D “printing” is really a type of manufacturing. Basically, the printers build three-dimensional solid objects by depositing material, thin layer upon thin layer, until the object is completed. Since the machines add material only where needed, based on the digital design, they are more efficient than conventional manufacturing processes that require excess material to be removed once the object is built.

Stegeman creates a 3D model using computer-aided software, then sends the design to one of his printers. When an object is completed, he removes it from the printer and applies any needed final touches, such as sanding or painting.

So far, he has made a human heart model, welding fixtures, a Periodic Table of Elements and a toilet plunger, among many other things. Since December, he has filled about 50 orders – some for just one piece, others for as many as 100 pieces. He made the heart model for a tech start-up in the Twin Cities. A Minnesota Vikings logo – the Nordic warrior with the mustache and long braids – he made just for fun.

Gibbon is part of a flat agricultural region that spreads west from the southwest Twin Cities exurbs. Arlington, Gaylord, Winthrop and Gibbon are among the small towns that dot Highways 5 and 19. Gibbon is part of the GFW (Gibbon-Fairfax-Winthrop) School District and has the district’s elementary school, which sits in a leafy neighborhood just a few blocks from downtown.

The population of Sibley County has held steady over the years, helped by its proximity to the Twin Cities. (Lietzau, the city administrator, could think of four Gibbon residents who work in Shakopee – an hour’s drive away). Civic leaders are currently working on one promising development for the region: an osteopathic medical school that would be housed in an old elementary school building in Gaylord.

For years, however, the region had spotty Internet service – a drawback for economic growth.

In 2015, Gibbon joined nine other cities and 17 townships in creating a cooperative that promised to bring broadband Internet access to 6,200 residents across both Renville and Sibley counties. RS Fiber Cooperative laid fiber optic cable through Gibbon in 2016 – about the time Stegeman began thinking seriously about striking out on his own. Each of the cities involved in the cooperative now has fiber optic cable, with speeds of up to 1 gigabyte; the second phase of the project – to bring broadband to the countryside – should begin in 2020, according to a spokesman for RS Fiber.

The cost to bring broadband to the cities involved in the project was about $15 million; Gibbon sold bonds to raise its share, which was $813,000. Lietzau, the city manager, said civic leaders pitched broadband access as at least one way to encourage businesses to locate in Gibbon. The Stegeman venture has helped to validate that hope.

While Stegeman is now a business owner, his sales days are far from over. He does a lot of cold calling to generate interest in Advocate3D. After his interview with MinnPost, he met with a marketing consultant as he worked on ways to promote his business. 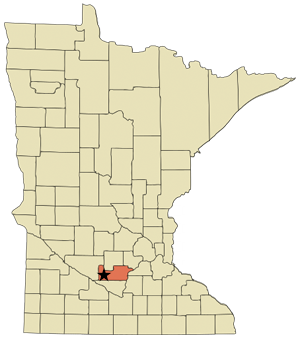 To fill orders, Stegeman must download large files of designs over his broadband connection. He can download 10 gigabytes in an afternoon, which he said was a major factor in his decision to locate in Gibbon.

“It really speeds things up,” he said. Without a connection that can transport huge digital files, he would need thumb drives sent through the mail – a much slower and more inefficient way to do business, he said.

Stegeman hopes his business will grow so that he can eventually employ some people who live in the area. He looks 10 years ahead and sees stability, three or four employees and profits. That is the plan, anyway.

For now, he fills orders in his shop while his wife works as a surgery nurse in Glencoe. (“She’s floating us right now!” he said). Sometimes, his kids drop by after school; at other times, he walks to the school to have lunch with them. He postponed one interview with MinnPost so that he could chaperone a student field trip.

“There was a lot more to this decision beyond the money,” he said.