It started as a regular weekend getaway. Les Olson lived in Brooklyn Park with his wife and two daughters. They spent weekends in Big Stone County on the state’s western border, where they could reconnect with the soil on his family’s defunct dairy farm.

“We didn’t know anything about garlic,” Olson said.

But that was years ago. This summer, after commuting from the city for years, Olson’s family sold their Twin Cities home and moved to the farm full time, with audacious plans to turn garlic growing into his full-time job.

It hasn’t exactly work out as planned … yet.  It turns out that finding outlets for all the garlic Olson wanted to grow would be harder than he expected.

“It’s just taking a long time to figure out the marketing part,” he said. “The amount of garlic we’re growing now, you know, it didn’t quite pay for all the gas coming out here.”

Gardeners and hobby farmers have long grown garlic in Minnesota, but interest in the bulbous plant deepened in the early 2000s, after a couple of growers wondered if anyone would show up for a festival dedicated to it. They did, and Hutchinson’s Minnesota Garlic Festival now draws a steady crowd of a few thousand people. And now growers are shifting their gaze to a much more ambitious goal: to see if Minnesota garlic can become a full-fledged industry.

The origins of Minnesota’s garlic aspirations can be traced to a phone call Carl Rosen received in the mid-1990s, when he was an extension specialist for the University of Minnesota. The caller wanted to know what kinds of nutrients garlic needs.

“At that time, I didn’t even know you could grow garlic in Minnesota,” Rosen said.

Rosen, who is now the head of the university soil science department, made it his business to figure it out. He discovered that certain kinds of garlic grow well in Minnesota, though these varieties differ from those available at most grocery stores or used in restaurants.

The good news was that northern climate-friendly garlic varieties are also considered premium and fetch higher prices for farmers. They also look different from the small, pale garlic bulbs available at your average grocery store. They tend to grow bigger cloves, and some have purple streaks. Garlic fans also say they have stronger flavors, and growers tend to describe their particular characteristics as if they were talking about wine or single origin coffee beans. 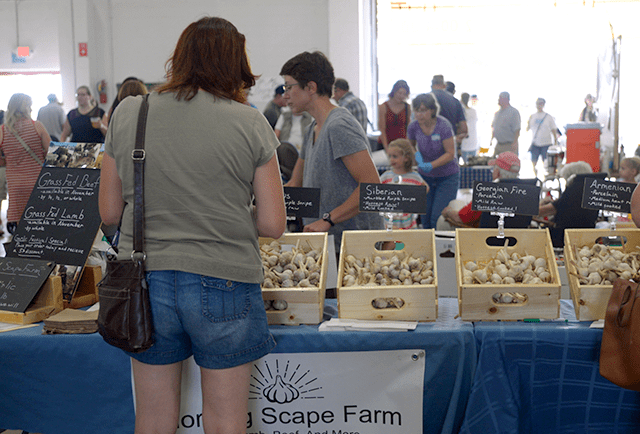 To promote more garlic growing and consumption in Minnesota, a group called the Sustainable Farming Association applied for and received a $100,000 grant from the U.S. Department of Agriculture. The project encompasses everything from teaching new growers best practices to exploring potential markets, and it brings with it the logistical concerns plaguing most small farms trying to participate in local food trends, including the need to maneuver supply chains designed for an industrialized food system.

Jerry Ford, a garlic grower on staff with the Sustainable Farming Association of Minnesota and one of the founders of the Minnesota Garlic Festival, is spearheading the effort, and he says he is already surprised at what he’s learning. For example, while he sells out of garlic within a couple of months of harvest each year, other growers, like Olson, often have enough product leftover to donate to food shelves, an imbalance around the state that the project hopes to find a solution for.

“When we started, we started putting out this survey and beating the bushes,” Ford said. “I was overwhelmed. I didn’t realize there were as many [growers] as there were.”

On a 90-plus-degree day in August, garlic festival-goers wandered between food tents or trucks and two McLeod County Fairground buildings. In one of them, growers stood over tables of garlic with names like Chesnok Red and Music, talking to customers about growing techniques and the differences between varieties.

On a stage in the food tent, where the scent of garlic wafts from the outdoor kitchen set up for the day, Jennifer Lindblom, a chef at Trapeze — a champagne bar that’s part of Barbette restaurant in Minneapolis — prepares a purple potato salad with pickled summer squash and homemade aioli.

Lindblom said by showing someone how to make aioli, she’s trying to teach them that garlic is as important as the rest of the ingredients going into their meals. If anyone is selective about the tomatoes or cucumbers they buy at the store, they should know they can be selective about the garlic they buy, too. “Garlic goes into so much of the food we eat, why would you not buy the same quality of that product?” she said. 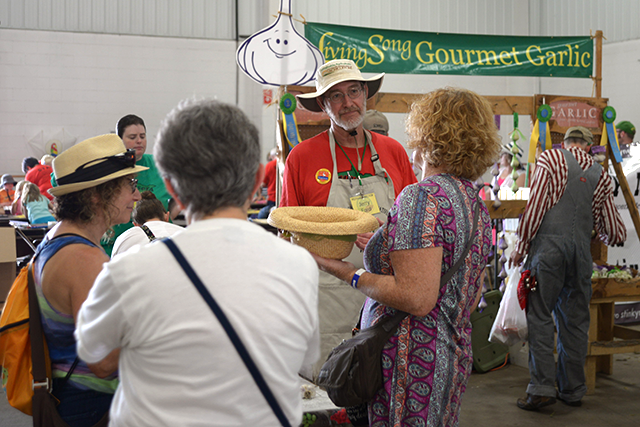 It’s a relief to growers that those on the buying side of the garlic equation see opportunities for the crop. In Big Stone County, the small population and rural geography added to Les Olson’s struggle to make inroads in new markets. He doesn’t have easy access to the metro area, and nearby farmers markets haven’t offered a big enough payoff to be worth the time and effort they demand.

“Even in the small town co-op that we thought would be the perfect fit, they couldn’t move very much of it,” he said.

Garlic fits plenty of food trends that could drive demand in the state’s culinary world, said Connie Carlson, who works for the University of Minnesota Regional Sustainable Development Partnerships, a part of Extension that uses university research and resources to solve problems in Greater Minnesota. Working with the Sustainable Farming Association’s Ford, she’s researching potential markets for garlic in the state, including restaurants and grocery stores.

In this early stage, Carlson has a long list of questions to answer before a full picture of market opportunities for garlic growers becomes clear. While Ford surveys farmers about the garlic they’re growing, Carlson is creating a survey she’ll give to culinary professionals – not just restaurant chefs – to figure out how much garlic they use, how much they pay for it, the form they prefer to work with, whether they would value a local source, and what issues they would have to overcome to do that.

“In the conversations I’ve had, one of the challenges with garlic is that it’s rarely a signature item,” Carlson said. “So, chefs don’t look at it as necessarily a premium produce that they’d want to highlight on their menu.”

That’s often true even at “farm-to-table” restaurants, few of which source all of their ingredients locally. Yet Lindblom, who has worked in restaurant kitchens since she was a teenager, including Minneapolis’ highly regarded Cafe Alma, says that may be changing as Minnesota garlic becomes better known. 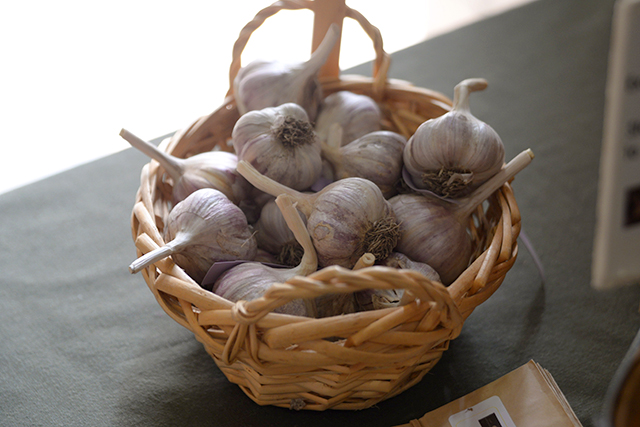 “Most of the restaurants I work at order prepeeled garlic,” Lindblom said. “It says it’s from Spain. Who knows where else it’s been for processing? … At Alma, we used Minnesota-grown garlic. It’s much more expensive and labor intensive to process. We (had) people peeling garlic nonstop to keep up with needs. … [But] it’s totally worth it because you can smell and see the freshness of the product.”

While prices for premium garlic seem like a barrier — Minnesota garlic can cost as much as $20 per pound — Mary Jane Miller, a chef, gardener, and culinary consultant also involved in the garlic festival, said she thinks restaurants would pay more for what she considers superior garlic.

“On a profit and loss sheet, garlic doesn’t amount to much,” she said, “and the credit they get on their menu outweighs the pennies spent.”