Last winter, as the 2019 legislative session approached, advocates for Minnesota cities and counties, especially those in rural areas, hoped for an increase in the amount of financial aid local governments receive from the state to help them cover their budgets.

While cities and counties already receive millions of dollars in state aid every year, they had been looking for more for years, arguing that the amounts they were getting had not kept up with inflation or with the rising cost of public services.

This year, they had a crucial advocate in their corner: Gov. Tim Walz, the rural Democrat who won last fall’s election after running on a “One Minnesota” campaign theme that included promises to restore funding for the two aid programs dear to cities and counties: Local Government Aid (LGA) and County Program Aid (CPA).

Emboldened by Walz’s win, the Coalition of Greater Minnesota Cities, in a preview of the 2019 legislative session, put an increase of LGA funding at the very top of its priority list. The Association of Minnesota Counties included a CPA hike on its wish list, too.


They got what they’d long wanted as lawmakers and Walz agreed to provide each program with more money over the next biennium than they have received in years. A tax bill signed by Walz includes a $26 million increase in LGA and CPA funds for 2020 and another $4 million increase in 2021. That will bring the LGA expenditure for 2021 to about $565 million and the CPA expenditure to about $260 million.

In a statement issued after legislators approved the funding, Ron Johnson, a Bemidji City Council member and the current president of the Coalition of Greater Minnesota Cities, said he was “ecstatic,” saying that the LGA money will help cities “hire an additional firefighter or replace a beaten up old snowplow.”

Funding for Local Government Aid reached $565 million in 2002 before increasing for one more year and then falling off during the Great Recession. For the last several years, proponents have argued for a return to that 2002 funding level, using that figure in its press releases and position papers. Walz got on board with the idea during his campaign and told MinnPost before the session that he would seek an increase in the programs in his budget proposal.

About 90 percent of Minnesota’s cities receive some money from the LGA program, which helps many of them to pay for services that are generally covered by local property taxes. Last fall, 22 cities held referendums to raise property taxes, with 16 of those measures passing – perhaps one sign that some municipalities have been looking for ways to fill in gaps left by drops in LGA support. (More than a dozen cities also passed temporary sales tax increases, which allow them to raise a targeted sum of money over a given time, usually for specific projects).

LGA funding levels dating to 1986 can be found here. [PDF]

For some Minnesota cities, especially smaller ones in greater Minnesota, LGA provides a significant part of their budgets.

International Falls, on the state’s northern border, will receive about $4.3 million in LGA money in 2020 – nearly a third of its annual budget of about $13.7 million. That state aid is the city’s largest single source of revenue, according to City Administrator Kenneth Anderson, who called the annual LGA allotment “an essential factor in our budget.”

The city will get an increase of $153,000 in LGA money next year. While some cities use the money for specific projects, Anderson said, International Falls uses it for essentials, like paying police officers or funding the public works department.


Unlike many suburbs or regional centers in Greater Minnesota with stable populations, International Falls deals with a lot of uncertainty in preparing its annual budget, Anderson said. Tax receipts this year, for instance, are expected to decrease by $102,000 because of a change in the valuation of one major business in town. At the same time, growth in the housing sector has been modest for years. (International Falls is much smaller than it used to be; the city of 6,000 has about 2,300 fewer residents than it had 30 years ago after it merged with South International Falls). 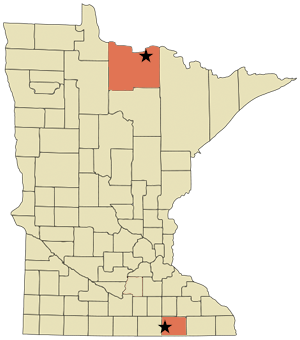 “It’s just critical for us,” he said of the aid.

This session, International Falls also got legislative approval for a temporary sales tax increase that is expected to generate $30 million, money that the city will use to fix century-old sewers and water mains. Residents approved the measure in a referendum last fall. While the city has a relatively small population, nearly a half-million vehicles from Canada come through town each year (based on 2016 figures), many of their drivers stopping in town to spend money.

LGA has its critics, especially cities that don’t receive much, if any, money from the program. Anderson knows firsthand that LGA money can be distributed unevenly. When he worked as an administrator in Crosslake, on the prosperous Whitefish chain of lakes in Crow Wing County, the city received about $12,000 in LGA funds one year.

For International Falls, though, “it’s more than just a filler,” he said.

Many county officials refer to CPA a form of property tax relief – a way of lessening the size of the levies that fund county government. In reviewing the results of the 2019 session, the Association of Minnesota Counties included the CPA funding increase under its list of “major victories.”

The year 2002 was also the magic number for CPA proponents; the $260 million that will go into the fund by 2021 is roughly equal to what counties received in CPA funding 17 years ago. CPA funding levels dating to 1999 can be found here. [PDF]


Mower County, on the southern Minnesota border, will get about $2.6 million in CPA funds in 2020 – an increase of about $255,000 from what it received this year. That’s helpful but relatively modest, considering the county has an annual budget of about $69 million, County Administrator Trish Harren said. The money will go into the county’s general fund.

“We do appreciate what the Legislature did to help counties and to at least make the effort to re-establish (CPA) aid at those 2002 levels,” she said.

Harren told MinnPost that two areas, in particular, are driving an increase in costs in Mower County: an aging population that needs health and human services and illicit drug use that has led to a “dramatic increase” in expenses to law enforcement. (Harren made the case for more state investment in CPA, as lawmakers were debating the measure, in a column she wrote for the Austin Daily Herald).

Moreover, those annual costs are difficult to predict, she said. For instance, Harren referred to an inmate in the county jail who needed $15,000 worth of medications each month – a cost borne by the county. The county also spent about $4 million last year on children who had to be placed either in foster care homes or in correctional facilities. “We’re just not getting the participation from the state that we need to help fund these additional costs that we have no control over,” she said.

Twenty years ago, Mower County received about $2.2 million in CPA money. Adjusted for inflation, that would total about $3.4 million today – far more than what the county will receive in each of the next two years, even with the increase. “(CPA) has been static for so long – or cut – that, honestly, counties like ours try not to depend on it as a source of help because we have such large budgets,” she said.

Like many counties, Mower County struggles to maintain its roads and to stay on top of other infrastructure repairs.

And like International Falls, Mower County increased its sales tax a few years ago, using $4.5 million of that money to fix 42 miles of roads and 10 bridges last year. It will do a similar set of fixes this year. Harren is grateful for that funding but thinks of sales tax increases as “a last resort.”

So the county looks where it can to offset costs. A production tax on a wind turbine, for instance, generates about $2.2 million per year. “We do the best we can with what we have,” Harren said.