For the past several years, manufacturers and other large employers throughout Greater Minnesota have been dealing with a shortage of workers – a scenario that has only found staying power in a strong economy with low unemployment.

MinnPost chronicled the issue two years ago, noting that many companies were either operating short-staffed or holding back on plans to expand. Businesses in lightly populated regions of the state have been particularly stressed for workers.

The problems that vex workers are myriad: a dearth of adequate skills; expensive or sparse child care; drug and alcohol abuse; physical disabilities; the lack of reliable transportation; and cultural alienation, especially for immigrants.

“To me a great way, a really useful way of thinking about all of this is that in some cases workers who are not working might like to be, but they are facing barriers to getting and keeping a job,” said Traci Tapani, the co-owner of Wyoming Machine, Inc., a sheet metal company in Stacy in east-central Minnesota.

Tapani recently served on a statewide panel, created by former Gov. Mark Dayton, that was tasked with studying workforce development. The group subsequently issued a strategic plan that determined that a strong Minnesota economy “requires a workforce development system that provides greater employment opportunities for those experiencing barriers to employment and meets the skill needs of employers.”

The task force boiled its work down to two goals: reducing educational and employment disparities based on race or disability and building partnerships that will connect skilled workers to the businesses that need them. Here’s a link to a summary of the report.

Tapani and her sister, Lori, bought Wyoming Machine from their father 25 years ago and together run the business, which sits along Old Highway 61, the famous road that stretches the length of Minnesota along its eastern edge. 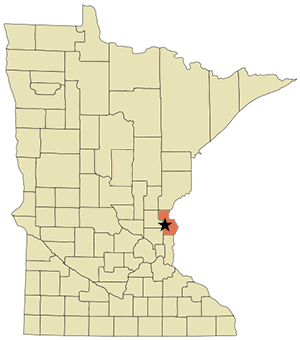 On the governor’s panel, Tapani met several people who were thinking creatively about ways businesses and other organizations could recruit and retain workers. That matched her own mindset, she said, noting that she and her sister had already “shifted their thinking” – both about the possibilities for who might work at Wyoming Machine and about employees who might struggle. “We didn’t want to think about how we couldn’t grow,” she said. “We are entrepreneurs and problem solvers, so we just started from there.”

One approach was simply reconsidering the kinds of people who might apply for a job at their company – jettisoning the stereotype of the manly, dust-covered worker who grew up, as Tapani put it, “wrenching on cars.” Indeed, the employee roster at Wyoming Machine includes some interesting cases in point: a former Ohio State women’s hockey player, female welders, a few employees with criminal records, the first Latino worker at the company.

To boost retention, the company has invested in strategies to help their employees deal with various situations.

For instance, Tapani often grants paid time off for workers shortly after they are hired – not one year later, which is a standard practice. That way, family emergencies or other issues that might arise just as a worker is adjusting to the job can be tended to, with little disruption for the business.

That was true for Francisco Rivera, who had been toiling as a roofer before he found a job running machinery at Wyoming Machine. Rivera said he had never even received paid time off and was grateful to be able to access it within a few months of beginning his new job. “That was really useful,” he said. “I had a few emergencies going on and I used the time off that I got here for them.”

In the administrative wing of the company, the Tapanis have outfitted a room with a large screen television and computer technology that workers can use to take online classes from nearby Pine Technical and Community College or other schools. (A federal grant to the college helped pay for the equipment.) Among the classes: personal budgeting, technical math, CNC machining basics.

The arrangement allows workers to avoid trips to the college, which might affect their shifts or require them to find more day care for their children. Wyoming Machine pays the workers while they are taking the classes, too.

Wyoming Machine employs a deaf man who has largely overcome that disability with technology, communicating with his supervisors through text messages. For some employee meetings, Tapani hires a translator for him.

“That kind of situation can be difficult and challenging – it can be scary when you are not used to it,” she said. “Now he’s been here 10 years or so, he’s an awesome welder and does super great work for us.”

Jessica Miller, a workforce strategy consultant for the state Department of Employment and Economic Development, said worker retention, for many rural employers, has become just as important as recruitment and training.

Miller mentioned a few retention-strategy examples: businesses that reimburse workers for day care expenses, others that bus people to work (like this one), businesses that offer English classes for immigrants.

Cambria, the countertop maker whose manufacturing plant is in Le Sueur, hired several English teachers after realizing many of its Latino employees were struggling to communicate with supervisors. Employees are paid while attending the classes and more than 200 were enrolled last year, according to a company newsletter.

Miller, whose work covers part of southern Minnesota, also said some businesses are finding, increasingly, that they need to instill what she termed “Customer Service 101” values in their employees, such as showing up to work every day and on time and putting smartphones away during shifts. Some businesses also offer their employees courses in how to manage a personal budget.

She also referenced a budding workforce movement: “fair chance hiring” – the idea that businesses should be more open to hiring people who have been in jail or prison. Her agency is planning to host an event devoted to this topic this fall in Marshall. The agency sponsored a conference on the potential of workers with disabilities in May.

The Center for Rural Policy and Development, a think tank based in Mankato, has also weighed in on the issue, interviewing more than two dozen employers for a report titled “Finding work or finding workers?”

As the report put it, many Greater Minnesota employers are challenged with “engaging with and recruiting workers from groups of people living in particular circumstances that make it difficult for them to hold jobs.” Accordingly, the center determined, public policies and assistance that largely focus on workers who have been laid off should be increasingly directed to those who face barriers to finding work. (Here’s a link to part 3 of the report, which focused on job retention).

On a recent August morning, Tapani showed me around the manufacturing floor of her business, a so-called “job shop” that makes metal parts and components for other businesses or organizations. A stack of heavy metal platforms awaited shipment to a school district in southern Minnesota, for use in playground equipment.

The company has been on a hiring spree, adding a half-dozen workers in recent months, and has a workforce of about 55 people, making it one of the larger employers in Stacy, a town of 1,500 people in Chisago County.

Tapani said the cost of not being able to fill open positions is much higher than the cost of investing in strategies that can help workers keep their jobs. And she said taking some risks has “produced some great employees.”

She shared an anecdote — one that, for her, captures the possibilities of a broader and more generous kind of employee outreach:

A single mother who had recently been trained in welding at Pine Technical and Community College arrived for an interview at Wyoming Machine, but she didn’t have her welding equipment. She had recently moved into a homeless shelter, she explained, and had to place all of her equipment in storage. So, she just showed up with what she had. Rather than dismissing the woman as unprepared, Tapani found some equipment so that she could complete her interview. She didn’t get the job, but she got a fair shake.

“When you are in a vulnerable position like that, you just don’t have a lot of support,” said Tapani. She added: “Think about people on the edge, financially, in a rural community who have to, say, decide between gas money and a heating bill, things like that. Unfortunately, that is a real thing.”

In a tight labor market, Greater Minnesota businesses think creatively about how to hang on to workers