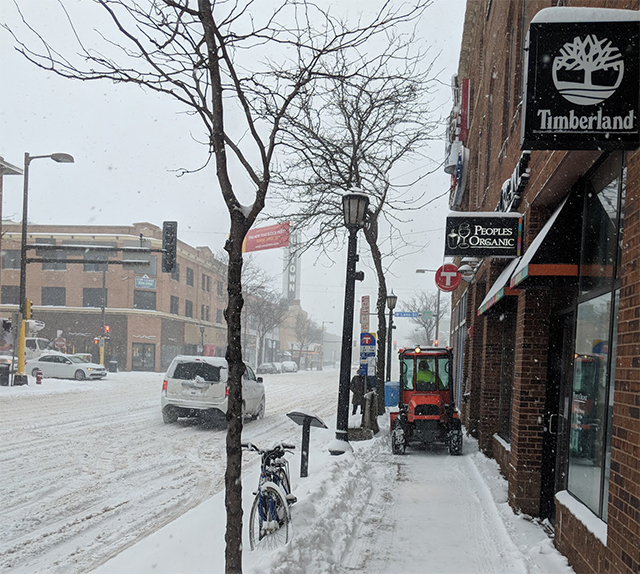 Photo by Patrick Steele
An immobilizing storm means people are less likely to be out and about making purchases.

As snow promised to blanket the Twin Cities for the duration of the weekend, Kara and Bill Kurth, husband and wife co-owners of Golden Age Design, a furniture and accessories shop in Robbinsdale, had a decision to make: stay open in the face of a blizzard, or close the shop on a Saturday, typically one of their busiest days of the week?

With the forecast looming as it was, the latter seemed to be the prudent choice.

“We saw some other shops in the cities also make that choice, so we felt OK about it,” Kara Kurth said. Indeed, many Twin Cities shops and restaurants decided to close for part of the weekend. “We don’t make that choice lightly, obviously, because we don’t want somebody to make the trek out and be disappointed.”

Snowstorms like this weekend’s record-setting April blizzard, which dropped between 15 and 20 inches of snow on much of the Twin Cities between Friday night and Monday morning, can hurt the bottom line of businesses like the Kurths’, which does about a quarter of its monthly sales on a given weekend. But in terms of its impact on the bigger picture, economists say the effects are mixed.

Blizzards affect many types of businesses, but not all in the same way. For some, it’s a boon and for others, more of a bust.

They tend to benefit grocery and convenience stores, as homebound people stock up, then tend to eat in instead of out, wrote David Frieberg the vice president of marketing for Planalytics, a firm that measures the effects of weather on business, in an email. Online shopping also tends to benefit, though overall shopping does not.

Planalytics estimates the retail sector in parts of the Upper Midwest hit by the storm took a $65 million hit as a result of the weekend blizzard.

An immobilizing storm means people are less likely to be out and about making purchases. In most cases — such as eating out for dinner, or a trip to the mall — they’re unlikely to make up for the purchases they didn’t make over the weekend the next time they go, Frieberg said. He estimates overall transactions at restaurants, clothing stores and home centers were down an estimated 10 percent to 15 percent.

Planalytics uses both syndicated data and its own research to make estimates, Frieberg said. Of course, it’s important to remember that these are estimates based on the industry overall, and not specific businesses. Some stores — say, a restaurant that can deliver in a blizzard —  might do better than ones that depend on sit-down diners, Frieberg said.

A storm like this tends to have mixed impacts for hardware and home stores early in winter, but not in April, Frieberg said. Blizzards generally prompt the purchase of shovels, ice melt and snow blowers, but by now, most stores — and their customers — have switched into spring mode.

When it comes to specific products, Planalytics estimated weather-driven demand, which looks at the effects of just the weather on sales, comparing them to the same period the prior year.

That estimate has sales of lawn and garden products, short-sleeve shirts, barbecue and grilling products, sandals and sports drinks down. Sales of soup, bird seed, fleece, windshield washer fluid and hot cocoa were up.

But on a more macro level, the net economic impact of a storm like this?

Maybe not as much as you’d expect, at least according to another company’s model.

A storm like the one the Twin Cities saw tends not to have a major impact on GDP, said Ben Herzon, executive director of U.S. economics at Macroeconomic Advisers by IHS Markit.

That’s because the storm took place almost entirely within the space of a weekend, he said, relying on findings in an IHS Markit model of the impact of bad weather on national GDP.

“There is both a disruptive element to extreme snowfall and a reactive element. That is, extreme snowfall both disrupts economic activity that would normally take place and gives rise to activity that would otherwise not take place (like clearing roads and parking lots),” Herzon and a colleague wrote explaining their methodology after Winter Storm Jonas dumped up to three feet of snow on Northeast and Mid-Atlantic states over a weekend in January 2016.

“When blizzards happen during the week, evidence supports this notion that a lot more economic activity is disrupted than occurs in response,” Herzon said. “When it happens on the weekend, it appears to be the case that the that the reactive activity is as big as the disruption,” creating no net effect.

While it’s important to note that IHS’ model looks at effect on national GDP, “I wouldn’t expect there to be a (net) impact in the Twin Cities area based on our research in the national data,” he said.