So, when’s the last time you saw a parent cave when a kid wanted his or her own way? Was it the 5-year-old howling at the store checkout to get a candy bar? Or the neighbor who let his high school kid go to Mexico with friends over spring break because “everybody’s going?”

Now, think about those kids going to school and how they act when they get there. Hmmm.

I talked to a Lakeville mom the other day about kids’ behavior at school. Like so many others, Chrisann Rauzi believes teachers have a lot on their plates — what with working to raise math and reading scores, meeting every kid’s educational needs and keeping order in the classroom.

It’s that order thing that has her especially bothered.

That means less learning time, a real problem when you’re trying to educate kids to meet the demands of the 21st-century global economy.

That’s why Rauzi and parents, principals and teachers at about 200 public and private schools across the state are doing their bit to change student behavior. They’ve joined a new campaign called Say Yes to No. Basically, you read a parenting book by noted Minneapolis psychologist David Walsh, talk about it and implement the techniques.

The book is called: “No,” which would have been edgy if Walsh had stopped there, but subtitles tell all these days, when everybody’s pressed for time. The full title is: “No: Why Kids—of All Ages—Need to Hear It and Ways Parents Can Say It” (Free Press).

“Basically, it’s about helping parents say no if they need to,” explained Dick Oscarson, principal at Eastview and president of the Minnesota Elementary School Principals’ Association.

Rauzi, parent of two, says the book is “terrific,” though “not rocket science. It just helps remind you and reinforce what you know.” 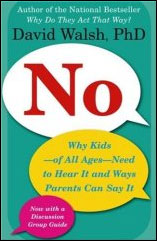 “I think parents are finding it more difficult to say no and to set boundaries,” Knuth said.

“Too often, our kids get caught up in the culture of ‘more, easy, fast and fun’ and develop Discipline Deficit Disorder,” Walsh said. And that behavior walks right into the classroom with the child, Walsh told educators at the Minnesota Education Summit this fall.

Say Yes to No gives parents and educators the tools they need to teach children self-discipline, says Walsh, president of the National Institute on Media and the Family, a nonprofit organization studying the effect of media on American children. The book includes tactics parents can use to reduce the 44.5 hours a week kids spend in front of their television, movie and computer screens.

“By helping parents become stronger parents, we can ensure our kids can succeed in life and school,” Walsh said.

Educators say when parents raise self-disciplined children, the kids do their homework, study for tests and are successful in school.

About 20 groups support the effort, from Education Minnesota to the Minnesota PTA to the Boy Scouts. Faith communities are showing interest, too.

Still, should parents feel a bit insulted they’re being asked to improve their parenting skills?

“What I’m hearing from parents is they want to read this book, and they want to have these conversations,” said Rosie Loeffler-Kemp of Duluth, state president of the Minnesota PTA.

Walsh’s publisher won’t reveal numbers of books sold, but Eastview families alone have ordered 135 and groups from 10 other states are interested in the project.

Still, it comes down to schools taking on yet another responsibility: educating parents. Will it work?

FYI
To learn more about the campaign, check out: www.sayyestono.org.