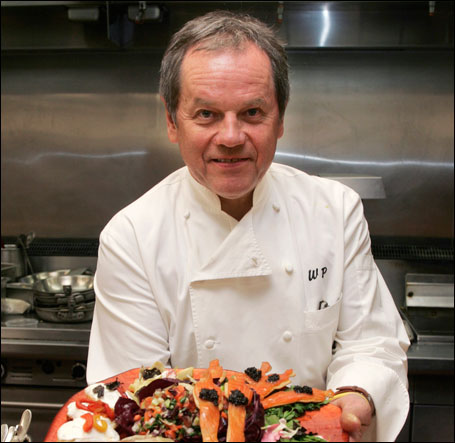 Wolfgang Puck wants to change the world, one organic tomato and chicken at a time.

“Little by little, we get people to change,” said the effervescent celebrity chef in a recent interview last month at 20.21, his restaurant inside the Walker Art Center.

He was talking about his WELL (Wolfgang’s Eating, Loving and Living) program, which, among other things, introduced organic meat, cage-free eggs and expanded vegetarian options to his restaurants. The effort also adds organic soups and all-natural pizza to his pre-packaged foods offered in supermarkets.

Puck is far from the first big player in the food industry to embrace organics—even Wal-Mart and Target beat him to it. And those of you who frequent 20.21 won’t notice a change, because Puck’s chefs — Executive Chef Scott Irestone at 20.21 included — have been using primarily organic and local ingredients for years. Puck’s announcement, at least in how it affects Irestone’s dishes, “is just a formality, really,” Irestone said.

Actually, the only headline-grabbing part of Puck’s program was the elimination of foie gras (duck or goose liver fattened through force-feeding), and that came after years of pressure by Farm Sanctuary, an animal-rights group.

So it’s easy to be skeptical that Puck, who has parlayed his name into a veritable food empire (his company hauls in around $300 million a year), saw the exploding organic market as the easiest place to garner publicity and profit.

I had my doubts, at least until I listened to Puck spend nearly an hour talking excitedly about his new program and realized that for him, it begins and ends with one thing.

It’s not the effects of large-scale farms. Puck doesn’t like them. He isn’t happy about the current subsidy system that pays such farms hundreds of millions each year, and his program says he’ll only use meat from farms with “progressive animal welfare standards.” But he didn’t come off as well-versed in the nuances of agriculture policy, and isn’t particularly interested in using his program as a political statement.

And it’s not childhood diet and obesity, though in Puck’s ideal world, “The kids won’t be sent to McDonald’s or Burger King or something like that and eat their crappy food,” and part of the WELL program involves studying a Las Vegas school district’s lunch program to see where more healthful ingredients can be substituted.

And it’s not even the environment, even though that’s important to Puck, too: “Great food comes from unpolluted land, unpolluted water and unpolluted air,” he said.

No, whether Puck was describing the economics of food distribution or reminiscing about his mother’s homemade vegetable soup, he always came back to one word: taste.

Puck knows good food and loves good food, and he has an earnest desire to share that knowledge and change people’s eating habits. That way, those people can tackle big-picture policy questions, and the subsequent changes will give Puck access to what he wants most — the juiciest tomato and the tenderest chicken.