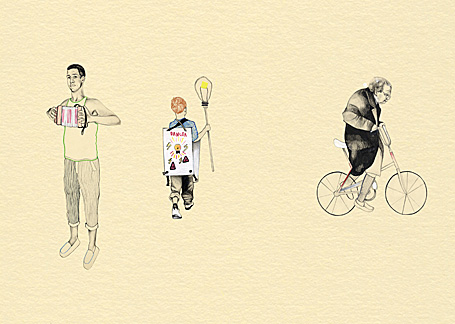 Eighteen Minneapolis College of Art and Design students recently scored awards in the annual Society of Illustrators of Los Angeles contest, one of the most prestigious of its kind in the nation.

Senior illustration students Lyndsey Lesh and Erik Krenz took two of the top honors, receiving the silver and bronze awards respectively for the overall quality of their work.

The awards themselves are noteworthy — after all, MCAD students competed against 1,000 submissions from top schools in New York, Los Angeles and other places. But more than that, they draw attention to MCAD’s nationally recognized illustration major, which doesn’t have a high profile even though it sends graduates each year to coveted jobs across the country.

Take, for instance, these examples: One grad is already at work on her 11th children’s book. Another does projects for the Wall Street Journal and The New York Times. Others work at Nickelodeon cable channel. And other graduates design toys, illustrate greeting cards, T-shirts and books, and head up design departments in marketing and public relations firms.

Award competitions help students focus
And competitions, said Tom Garrett, the chair of MCAD’s design department and a professional illustrator himself, are just the beginning.

“It starts to make (students) look at their work more seriously,” Garrett said. “They start to come in with a more professional attitude, like, ‘Maybe what I need to do is push my form,’ or start thinking, ‘Oh, I can do work like so-and-so in New York or London.’ “

Garrett knows a thing or two about transitioning from art school to the real world. The 1979 MCAD graduate has done work for such national publications as Atlantic Monthly, the Washington Post and National Geographic Traveler. So the illustration major isn’t just about, well, illustrating. Students are required to explore other media, as well as take required liberal-arts classes, find real-world internships and network with professionals in the field.

“A lot of (students), I think they’re transformed,” he said. “It gives them more confidence, a little more courage.”

Garrett also teaches a class devoted to the business side of the art world, including pricing and promoting work, writing proposals, sending invoices and, of course, managing money.

It’s to that diverse coursework that Lesh, 21, gives credit for her success. She has worked locally for the Rake magazine and for MCAD’s in-house design studio, and has been published in Creative Quarterly.

“It’s allowed me to home in on my personal experiences and develop my own connection with my work and the ideas that addresses those experiences,” Lesh said. “I found a way to take that skill and utilize it in my illustrative work.” 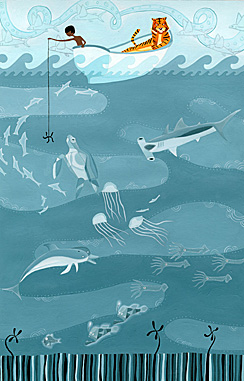 Krenz, 26, seconds Lesh’s views. He spent a few years traveling abroad and painted in his free time after high school. He didn’t have a lot of direction or focus until he submitted a piece to the Minnesota State Fair and, serendipitously, an art history professor saw it. The professor offered to buy Krenz’s piece and then convinced him to attend MCAD. She even helped him out with tuition the first year.

Krenz will graduate next spring and plans to freelance. He’s published a piece in American Illustration and, along with Lesh, will show his award-winning work in a Los Angeles gallery early next year.

“Since Day One, I have always known that MCAD will do whatever they can to help me in my life after graduation,” Krenz said. “Yes, we learn the business side of illustration and the fundamentals of art … but what really makes MCAD special is the connections and friends we build here. We inspire each other, we compete against each other, and it’s the people that I have met here that will help me most through the rest of my life.”