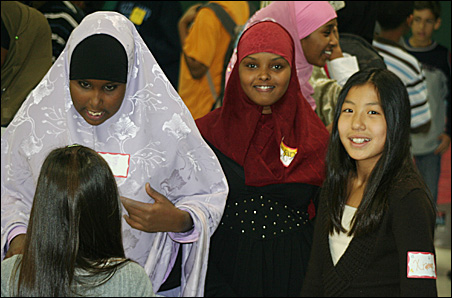 You may not have realized it, but the road map to world peace was hammered out Wednesday in a sunny green-and-white room in St. Louis Park.

In less than two hours, the 53 Jews and 43 Muslims who came together reviewed the core values of their faiths, listed their common-ground areas on butcher paper taped to the walls, and added some impromptu doodles by way of illustration.

No doubt it helped that as seventh- and eighth-graders, the emissaries aren’t yet burdened with hardened world-views.

Building friendships one get-together at a time
It was the second meeting for students from the Minnesota International Middle School and the Minneapolis Jewish Day School, and a number of fast friendships were under construction. The exchange is part of a larger interfaith effort sponsored by the St. Paul Area Council of Churches to bring together members of local synagogues, mosques and churches.

“When we first planned this, we were worried they wouldn’t talk,” said Dr. Ray Levi, head of Minneapolis Jewish Day School, which has 370 pupils in grades K-8. “But it’s kind of like when we turned on the spigot, they wouldn’t stop. It’s amazing how quickly they started talking about issues of real substance.”

Dressed in a black hijab and multicolored Vans, seventh-grader Ridwa Yacoub explained some of the words and pictures surrounding a scale of good and bad deeds on a poster her small group made. On the good side were images suggesting charity; on the bad side, violence and suicide.

On the poster’s right margin, Yacoub had also written the words “Hello Kitty” and “pink” — not bad in the religious sense, she told the rest of the group — she just didn’t like them. 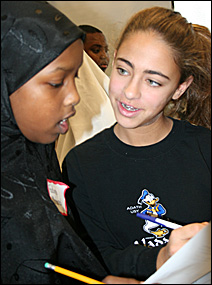 Both schools are open to all children, but are populated almost entirely by students of a single faith. “Our kids, since they are in school together, it’s a good thing to expose them to other religions,” said Abdirashid Warsame, director of the Minnesota International Middle School, a charter program located in Minneapolis. Founded in 2001, it serves 1,300 kids, principally Muslims of East-African descent.

Exchanges let kids discover their similarities
The pupils recited prayers and blessings in each tradition, played getting-to-know-you games, and deconstructed parables both old and new. The obligations of charity, for instance, were explored through stories involving both a legend involving an ancient king of what is now Iraq who gave away his riches, and Ben & Jerry’s Homemade Ice Cream, where no one may make more than five times the lowliest worker’s wage.

The rest of the day the kids spent being, well, kids. Over lunch, one student of Jewish Day School teacher Jodi Wolk turned to her and said of her new acquaintances: “Ms. Wolk, they shop at Abercrombie, and they wear jeans!”

“They’re discovering their shared humanity,” Levi said. “There’s a level of trust that they’ve brought to this to talk about things that are so personal.” 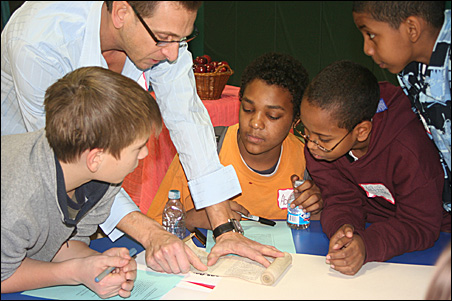 Photo by Aaron Lichtov, Jewish Day School
Daniel Ettedgui, a Judaics teacher at the Minneapolis Jewish Day School, shares a Megillah, a scroll containing the story of Esther and the Purim holiday.

Both Judaism and Islam carry a scriptural obligation to serve; after lively discussion of what this means in each faith, the kids talked about joint community service projects they will undertake Feb.18, which will be the next time they see each other. After that, they’ll get together monthly for the rest of the school year.

“They’re still in that innocent stage,” said International School teacher Samer Kader. “They’re not yet estranged like adults are. It’s very emotional to watch them find each other.”

Oh — and that plan for world peace? Both faiths emphasize acts of loving kindness as a means of “repairing the world.” That might sound like an impossible undertaking to an adult. But after exploring their shared values, the kids concluded that the obstacle preventing that repair is ignorance.