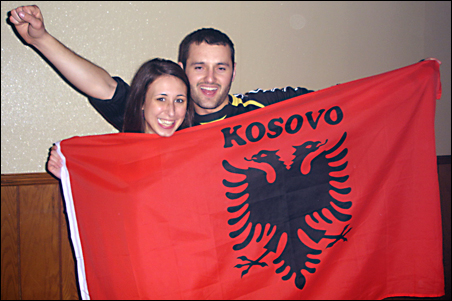 Jehona Syla spent her first three years as the College of St. Benedict student serving as a sort of informal ambassador for her home country of Kosovo.

“Yes, my country has the Internet,” she would tell curious friends and acquaintances at the St. Joseph, Minn., school more times than she cares to recall. Yes, there are restaurants and coffee shops and clubs, modern appliances. Yes, there’s electricity— and everything. Yes, just like here in America.

So when Kosovo formally declared its independence last month, she was grateful for the flood of news coverage.

Suddenly, students who last month couldn’t have picked Kosovo out on a map were asking Syla all sorts of informed questions, about the NATO military action in 1999, about poverty, about tensions with neighboring countries. The recent spotlight on her country even gave a few people (including this reporter) the forethought to ask Syla whether she was Serbian or Albanian.

(For a wide-ranging background on Kosovo’s independence, written by a Minnesotan who understands it better than practically anyone else, check out this post by fellow MinnPost reporter Eric Black.)

Of course, the coverage wasn’t all Syla was grateful for. She stayed up all night prior to the declaration, celebrating with Sylejman Ujkani, a fellow student from Kosovo. They danced and sang and carried around an Albanian flag.

Exactly at 8 a.m. our time, Syla called home to Pristina, Kosovo’s capital. It was 3 p.m. there. The announcement had been made moments earlier. Her family had just begun to celebrate.

“I was really happy, but at the same time I just couldn’t believe that it was happening,” she said. “Something that we had been dreaming for a very long time suddenly became true.”

From dream to reality
For the longest time, Kosovo’s independence was nothing more than that—a dream.

Syla, an Albanian, grew up surrounded by conflict.

Albanians make up the vast majority of Kosovo’s population (about 90 percent) but were often oppressed by the minority Serbian population. Syla’s parents lost their jobs. She attended an elementary school divided by a wall. Serbian children on one side, with adequate space and supplies. Albanian children on the other, sharing supplies and attending school in three shifts. In fourth grade, Syla didn’t get home from school each day until nearly 8 at night.

These are a few of the thing she rarely mentioned to curious acquaintances. A few others: electricity that cut in and out at a moment’s notice, water shortages, living in poverty.

“I may have not has the pair of shoes I always wanted to have, or my favorite kind of a fancy meal, but I still would not change it for the world,” Syla said. “It made me stronger and more appreciative about things in life.”

They returned, amazingly, to an undamaged house. And when Syla revisited her elementary school, she saw the first sign of independence, a vivid memory she continues to carry with her: The wall had been torn down.

“That was when I realized that we were finally free,” she said. “After the war, our lives automatically adopted a timeline, referring to it by saying, ‘Oh, this happened before the war, whereas this other thing happened after the war.’ “

The first steps toward independence
Syla was concerned for her family’s safety in the days following Kosovo’s declaration. She called her family practically every other hour.

She no longer worries. Still, she stays in touch a few times a week through phone and email.

Her country has a long way to go. The declaration was just the first step toward true independence.

Syla, too, has a long way to go. She’s still angry at Serbians, even though she knows not all of them are to blame, and she’s struggling to abandon her feelings.

“To this day, when I hear someone speaking Serbian, I get that bad feeling in my stomach, as much as I do not want to have it,” she said.

And Americans’ understanding of her country has a long way to go. People still ask Syla occasionally where Kosovo is, exactly.

But there’s one question, no matter how basic, that Syla now loves answering, because her response has changed. She’s no longer an Albanian from Kosovo. She’s a Kosovar.