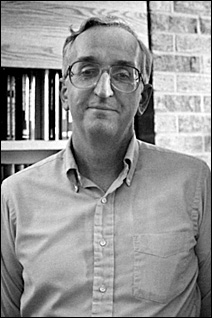 I was late for my only meeting with Chuck LaBounty.

It was a balmy afternoon in May 2003, the twilight of my sophomore year at Hamline University. I was an indifferent psychology major eager for summer, and this meeting was the last major barrier between school and three months of unabated relaxation.

I had avoided it for weeks.

Partly because I was worried about getting lectured for skipping his developmental psychology class all semester. But mostly because he had given me an ‘F’ on my final paper.

And every day since, I had paced the campus, unable to focus, my head clouded with terrifying thoughts.

Failing the class. Being required to retake it and drop out of the fall psychology classes I had enrolled in. The huge blemish on my transcript, which I figured I would be sending out to graduate schools soon enough.

I asked around for advice. The consensus was that professors were scared of failing students, scared of students taking their appeals to the dean. Challenge the grade, people told me. He’ll change it.

“Here’s the thing,” I told one of my friends, just to get it off my chest. “I deserved it.”

I hadn’t planned on being late.

But my walk to LaBounty’s office began at a trot and ended with me forcing one foot in front of the other, as if even gravity were conspiring against me. When I arrived, LaBounty was sitting at his computer with his back to me.

I knocked on his door.

Charles LaBounty (mostly everyone, including his students, called him Chuck) arrived at Hamline in 1972, and after a few decades he became practically as much a foundation of the university as the bricks that hold together Old Main, the first campus building.

He was an education professor first, then a psychology professor, specializing in developmental psychology. On the side, he taught other teachers how to control classrooms in positive ways. He taught at Hamline through most of fall semester last year before taking a sudden leave of absence.

Two weeks ago, he died of complications from liver disease. He was 68.

LaBounty was a realist. He knew some of us were in the developmental psychology class because we needed it for some requirement or another. He wrote thorough outlines on the board and didn’t ask anyone to take extensive notes.

He knew others were there to learn. And he loved lecturing.

So after he handed out the outlines, he stood at the board and often talked off-the-cuff, referencing everything from pop culture and news headlines to obscure historical events and his favorite pastimes, namely, fishing.

Occasionally he would get so wrapped up in a line of thought he would stop and run his finger across a page of the textbook in front of him until he found what he was supposed to be talking about.

It was a great class. I enjoyed it. And I skipped it practically every time.

It was early, 8 a.m., and I was struggling to control the behaviors that college’s sudden expansiveness welcomed. In other words, I was often too hung over to get up. I knew I could get by with LaBounty’s outlines. I never even bought the book.

I treated all of my classes that semester like that. I was burned out on college, unsure whether I still wanted to be there. And instead of challenging myself, I just stopped caring.

For the final developmental psych paper, worth somewhere between a third and a half of my grade, I chose to wax poetic on the benefits of male circumcision. Relevant to the class, sure, but I chose it only because it seemed a ridiculous topic to research.

I did an hour’s worth of research, strung together several paragraphs analyzing the current literature (as in, the two studies and one magazine article I found online) and in a last-ditch effort to make it meet length requirements, I expanded the margins to two inches on every side.

I slid the paper under his door one morning when I was supposed to be in class.

Two weeks later, when I showed up to class for a quiz, he handed my paper back. Just mine. Everyone else had received theirs last week. I glanced at the grade.

He had failed me.

He had written a few comments in red ink in the margins. Most were buttressed by question marks.

Fine, I thought. Then I realized it would drop my overall grade below a C-, the minimum needed in any class that was part of a major.

I agonized over the decision for weeks. Finally I emailed him and set up a meeting a few days before grades were due.

“What do you want to talk about?” he wrote me after we set the time and date.

I never wrote back.

I knocked lightly on LaBounty’s open door. He didn’t move.

I thought about walking away.

I knocked again. He turned around and nodded at me.

He waved his hand dismissively. “You wanted to talk about your grade?”

I froze. I clenched my hand around the copy of the paper I had brought. I had hoped he wouldn’t ask.

“I worked harder than that,” I said lamely.

He shrugged. “You deserved it,” he said.

He pointed at the paper in my hand.

“You’re better than that,” he said.

Then he turned back around to his computer.  I stayed standing in the doorway. After a moment he looked over his shoulder.

“Anything else?” he said. I shook my head and walked out.

The meeting had lasted less than two minutes.

I got my final grades two weeks later.

Not at his class, but at my future.

After spending that spring semester eager for summer, I spent the summer eager to start school again, eager to challenge myself. The burned-out feelings vanished. I stopped skipping classes and never came close to failing another one.

And two years later, I finished college with a psychology major (although by the time I graduated, I had spent hundreds more hours at the student newspaper offices than in the research labs, and my first résumé went out not to graduate schools but to daily newspapers).

Who knows. Maybe LaBounty, when he gave me the strongest scolding — and most defining advice — of my college career, wasn’t even sure who I was.

After all, he was a quirky guy. He hid chalk above his blackboard so other professors wouldn’t steal it. One cold morning he left a lecture early, because he was worried about getting a traffic ticket. He had parked in — not on, in — the street instead of driving all the way to the lot.

Or maybe he was just cranky that day.

But I don’t think so. And in the end, it doesn’t matter.

Because he was right.

I was better than that.