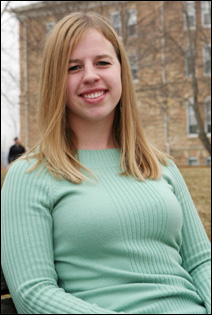 Take the 800 or so Fulbright scholarships awarded to students in the United States each year, with most Minnesota schools announcing at least one. Prestigious, sure, but an overwhelming volume if you’re curious about the stories behind the winners.

It’s easy to forget that students are selected because they believe they can, if even in the smallest way, change the world.

Here’s the story of one.

The Peace Corps. The JET Program (teaching English in Japan). She wanted the Fulbright most but was smart enough to not bank on it. After all, she said, “Who expects a Fulbright?”

After applying she was told she’d hear “sometime between March and June.” She endured small panic attacks every time she opened her email. She practiced the speech she would give friends and family if it turned out she was passed over.

One afternoon earlier this month she opened her email. And there it was: She was in.

Next fall she’s off to Morocco to research a subject that brought a Nobel Peace Prize to the last person who studied it.

Ryan is interested in microfinance. That’s a dry term for the uninitiated, so here’s a simplified definition: providing poor people with small loans so they can start businesses with their skills.

In Morocco, for instance, women from rural areas or other countries often have few opportunities, the most promising being working for rich people, in prostitution, or trafficking drugs. Say, for instance, one of those women can sew. She could launch a business with her skill and be successful. Only problem is, she doesn’t have start-up money.

Microfinance also refers to other financial services, such as savings accounts and insurance, as well as opportunities for people to learn skills and trades to start a small business.

The micro and the global
The small picture is best framed using the last half of the famous Chinese proverb, slightly modified to reflect Ryan’s research: Teach a woman to fish, and she will eat for a lifetime.

The big picture is this: Microfinance can use existing free-market economics to solve the biggest issues developing countries face — namely, poverty and hunger.

Ryan will study microfinance’s effect on rural Moroccan development, focusing on how effectively women have been able to use the small loans. She plans to partner with an organization in northeast Morocco http://www.zakourafondation.org/accueil.php3?vareng=oui that has a 13-year history of empowering women by using microfinance, and eventually publish a paper that examines the successes and shortcomings of the organization’s programs.

Her idea, in short, is to find ways to make the organization better, which in turn will help more poor women find ways to provide for themselves and their families.

Ryan is well-traveled, through opportunities from both her church and Gustavus, though at her core she’s a native of St. Paul and lifelong Minnesotan. And that’s given her one more goal for her Fulbright.

“I dream of feeling accepted as a member of the community,” she said. “I want to feel comfortable walking into the medina and visiting my ‘bread man’ and my ‘vegetable man’ and conversing in Arabic, though my Scandinavian features may make this quite challenging at first. I want to break the negative stereotypes that Muslims may have of Americans.”

And one more thing — maybe the most important of all.

Because there’s another famous adage, which says in so many words, that if you’re going to change the world, you have to change yourself first.