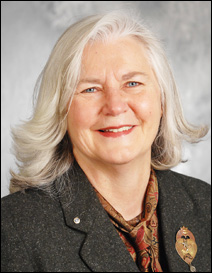 If there’s anything good that can be said about the marathon that is Minnesota’s standardized testing season, it’s that the politics of the exercise are still invisible to the kids stuck holding the No. 2 pencils. Well, mostly invisible: Any kid who’s old enough to dread the Minnesota Comprehensive Assessments has also figured out that the MCAs, as they’re known in classroom-speak, make teachers really, really cranky.

The state-mandated tests, Minnesota’s method of complying with No Child Left Behind, are supposed to assess school performance by counting the number of students who meet minimum levels of proficiency in math, reading and science. But in the five years since the federal law was enacted, a growing number of educators have come to agree with the average third-grader: The tests are a stressful, boring waste of time.

Freshman legislator knows firsthand problems with testing
Enter Rep. Kathy Brynaert, who was elected to the statehouse two years ago following a 12-year stint on the Mankato school board, where she lobbied state government to fix the testing system. The freshman DFLer is carrying a bill (H.F. 3329) to change the tests in the hope of generating data showing not just how many pupils are performing at grade level, but how much each learns in a given year.

Under NCLB, schools must demonstrate Adequate Yearly Progress, or AYP, by continually raising test scores. Failing to do so for two or more consecutive years triggers sanctions ranging from providing private tutors to a top-to-bottom reorganization, or “fresh start,” of the staff.

Throughout this month, students in grades 3-8, 10 and 11 are taking the MCAs, which measure student performance against a standard. There are reams of fine print, but the gist is that schools make AYP if kids in a particular grade this year out-perform last year’s crop.

Because of this, critics contend that a school’s score actually may have little to do with how well it’s reaching students. A program can do a great job bringing low-performing students closer to the standard but fail to make AYP. Likewise, schools with large numbers of proficient students can also fail to show growth.

“In AYP measurements, we’re really concentrating on students below the line,” said Brynaert. “Once that line is met, there’s nothing to measure.”

She proposes moving Minnesota to a “growth-based” model, in which individual students are tracked from one year to the next to determine whether they achieve more or less than a year’s learning, as determined by a statewide norm.

New approach would focus on growth model
A growth model would provide incentives to create further challenges to schools with students who already meet minimum standards incentives and would reward schools doing a great job with struggling pupils, Brynaert contends.

“This will tell them some really important things,” she said. “We can look at what happens in a particular school that exceeds [state norms].”

The bill is being considered both on its own and as part of the House omnibus education bill, which is scheduled for floor debate today. The measure also would require schools to show that students have completed specific, rigorous courses and measure student engagement. (The student engagement portion was dropped from the Senate counterpart, being carried by White Bear Lake DFLer Sandy Rummel.)

The measure has the support of numerous metro-area school districts, most of which already use some growth-based test in addition to the MCAs. The Department of Education opposes the bill; Education Minnesota, the teachers’ union, supports most of its provisions but opposes using student satisfaction surveys as a way to compare schools.

Brynaert is optimistic the measure will pass as part of the umbrella legislation. Even if it doesn’t, other supporters are quick to add, it’s good that a conversation is under way. Policymakers on both sides of the aisle are dissatisfied with NCLB; regardless of the winner of the presidential election, the controversial law is likely headed for an overhaul.