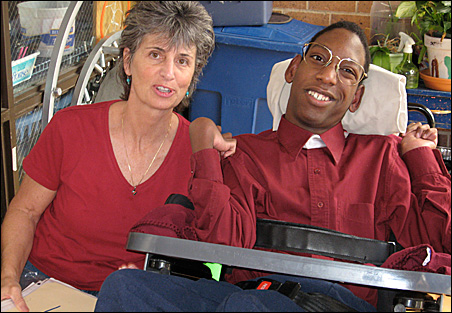 I met a kid the other day with a smile as wide as a freeway. He wanted to tell me Archbishop Desmond Tutu is coming to town this weekend and he can hardly wait to meet him.

Yet I’d wager Farrar will leave as big an impression as the peacemaker on the hundreds of youths gathered for youthrive‘s PeaceJam Conference in the Twin Cities.

Memories are made of this: The proud 18-year-old African-American, his body twisted by cerebral palsy, will sit in his wheelchair dressed like the great Tutu in wire rim glasses and whitened hair and advocate peace and equality for all. (Teacher Robi Inserra will be at his side, ready to whisper his lines if he forgets.) 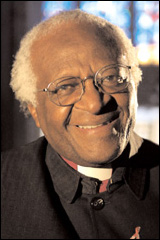 ‘Stars of Light’ play focuses on peace
“It’s inspirational to see people with disabilities — different abilities — trying to teach about peace,” said Jeff Snyder, a teaching assistant at Bridge View, who wrote “13 Stars of Light,” the play Farrar’s lines come from. It’s the story of the 13 Nobel Peace Prize laureates (including Tutu) who founded PeaceJam.

“Our students, they’re very special, talented, unique,” Snyder said. About a dozen other students from Bridge View, a public school for students with moderate to severe disabilities, will join Farrar to sign — not sing — “Love Can Build a Bridge.” (Some of the students are unable to speak.)

“I’ve just seen them practicing, but everybody who saw (the play) with me were in tears. Basically, it says, ‘If you put your mind to it, you can do it,’ ” said Abdiq Ahmed, a college intern at the nonprofit youthrive, the Upper Midwest affiliate of PeaceJam, based in Colorado.

Peace is the cornerstone to the group’s efforts. “By interacting with Nobel Peace Prize laureates, young people have the opportunity to learn from individuals who have used nonviolent means to make change in their communities and to understand that no matter who we are, we all have the opportunity to act to make a difference in the world,” said Donna Gillen, executive director of youthrive. (Yes, that lower case ‘y’ is correct; the kids like it that way). 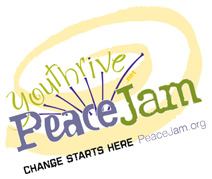 A bit of history here. Tutu, 76, now an Anglican archbishop emeritus, was awarded the Nobel in 1984 for his courageous stand against the injustices of apartheid in South Africa. He later was appointed chairman of the Truth and Reconciliation Commission to probe gross human rights violations under apartheid. His daughter, Naomi Tutu, program coordinator for the Race Relations Institute at Fisk University in Nashville, will accompany him to the Twin Cities.

Tutu on hand throughout weekend
The “jam” includes Tutu’s public appearance at 7 p.m. today at the Minneapolis Convention Center. Tickets can be purchased here or by calling 877-772-5425.  Tutu also is expected to take part Saturday in a special peace initiative in North Minneapolis by leading a peace parade at about 2 p.m. from North High School to the nearby Cub Foods store.

In addition, there will be a signing of peace covenants, a service project exposition, HIV/AIDS awareness information and the presentation of Hero and Shero Awards. (Don’t accuse them of gender bias.)  The project is supported by the Greater Twin Cities United Way.

“The intent is that it will be more than just an event,” said Dave Ellis, adult co-chairman of the North Minneapolis project, manager of the United Way Nurturing Children and Families Program and a North Minneapolis resident for 30 years.

“The young people want to showcase the goodness and diversity there,” Ellis said. A food drive is included in the massive community effort, involving about 90 government, law enforcement, faith, business and philanthropic organizations.

Saturday event seeks to bring community together
Youth co-chair Tracina Coward, 19, wants to see a coming together of North Minneapolis residents and others. “We want people to step out of their boxes, their comfort zones, to meet one another,” she said. 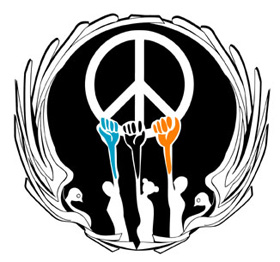 Coward especially likes the peace covenant project, subtitled “Making Friends of Your Enemies.” The youths will ask young people and adults to sign a pledge to work for positive change in the community.

The covenant reads in part: “In order to make peace in our society and to support this peace movement, I pledge to acknowledge and address violence, teen pregnancy, hunger, mental health and homelessness as issues in our community.”

“This is not just one day, it’s all year-round,” Coward said.

Students at Bridge View School, too, are learning year-round and lifelong lessons about peace-building from a PeaceJam curriculum.

As Farrar told me Wednesday, before practicing his lines, Tutu is “a nice guy, and he stands up for peace and freedom and equal rights and civil rights.”

Then Farrar sat up a little straighter, rehearsing his Tutu role: “I believe in equal civil rights for all. I believe in a common system of education for all.”

Then he smiled and said:  “Thank you for interviewing me. You’re beautiful.”

“13 Stars of Light” by Jeff Snyder. No seats are left for the abbreviated Sunday performance, but Bridge View students will perform the play at 2 p.m. April 18 at Bridge View School, 360 Colborne St., St. Paul.