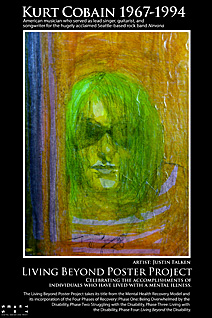 You hear talk of someone “coming out” and tend to assume that a revelation of sexual orientation is in the offing.

You could be wrong. That same fear of stigma plagues persons with mental illness. In this case, only those able to fight both their demons and societal stereotypes are “out.” Only they are able to talk openly about their anxiety or depression or schizophrenia.

That’s why I can’t help but admire a group of artists I met the other day in a windowless basement studio on Chicago Avenue South in downtown Minneapolis. They included Justin Falken and Faye Buffington-Howell, Clarence Reed and Christi Furnas, Linda Jones, Cecile Bellamy and Fran Traphagan.

Their art is a ray of sunshine in their often stormy worlds. Through the years, they’ve faced head-on challenges such as abuse, hunger, homelessness, rejection, joblessness, heartache and mental illness.

Still, they’re making their art. That’s why they gather in an old stone building in space provided by Spectrum Community Mental Health, a program of Resource, a nonprofit offering multiple services to get people back on their feet.

They shared their stories and talked about the works they’ll display in a show that begins today and runs through June 27 at Inspire Galleries, located on the skyway level of the Hennepin County Medical Center Red Building, 730 S. Eighth St., Minneapolis.

Art show meant to remove stigma of mental illness
Called “Living Beyond,” the show is meant to help de-stigmatize mental illness and to demonstrate that a full life, high achievement, even brilliance, can grow despite it.

“People don’t always see mental illness as chemical or a physical aspect of your genetics, something you don’t have any control over,” said Karen Hovland, director of mental health services for Spectrum. (Check out their gallery of work here.)

Mental illness wears the face of your neighbor, your sister, your best friend, says Amy Rice, visual arts coordinator for Spectrum and one of the show’s coordinators. The disease affects about one in four families, she said. 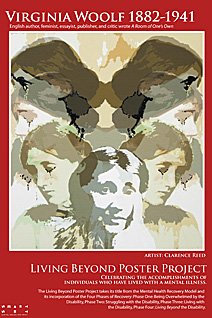 For the show, members of this offbeat art collective have created portraits of 20 celebrities with one thing in common. All had or have mental illness.  Count among them actors Richard Dreyfuss and Patty Duke; literary figures Ernest Hemingway, Virginia Woolf and Leo Tolstoy; journalist Jane Pauley; professional football player Lionel Aldridge; musician Kurt Cobain. Names were culled from a list available from the National Alliance on Mental Illness.

Renderings of Woolf, Cobain and Tolstoy are available as posters, to be sold and distributed to schools, hospitals and individuals. The trio sells for $20 with the goal of raising awareness of mental illness as a treatable disease. To order, call Rice at 612-752-8242. May is National Mental Health Awareness Month.

Reed created a multiple-image Woolf and two other works for the show. An artist to the core, he’s a quiet man, who, when he didn’t have money for art supplies used what he could scavenge: coffee or cooking oil for paint, discarded cardboard for canvas. In the darkest times, he’d steal what he needed: a brush, paint.

In this work space he has what he needs. With high, dinged-up metal tables, the studio looks like what it once was, a workshop. Only it’s brightened by the artwork hanging on every wall, bins of colored pencils, boxes of chalk and shelves of art supplies.

Life experiences influence their art
Buffington-Howell fashioned a powerful, white-haired Tolstoy now available as a poster. “Art is a catharsis for me,” she said, a striking 70-year-old who wears her hair long and peers through amber eyeglasses like a Vietnam-era flower child.  The daughter of an alcoholic, a victim of sexual abuse, she’s also lost a child, so it’s hard to not let her life experiences seep into her art, she said.

“It creeps in sometimes when you don’t want it to,” said Buffington-Howell, perched on a tall stool, artist’s chalk rubbing onto her fingers.

On the table before her is a pastel of a thin-faced man with pleading, brown eyes. The background is crowded with angled shapes, rather like pieces of a stained glass window. Buffington-Howell says she didn’t mean it to be so, but she sees in the abstract now a man committed to a psychiatric unit. A woman sits nearby, waiting for his release.

“I knew for a long time I didn’t feel like everybody else was feeling,” said Justin Falken, picking his way through a rainbow pile of tissue paper. As a child he was obsessed with digging deep holes, “like I was digging my own grave,” he said. 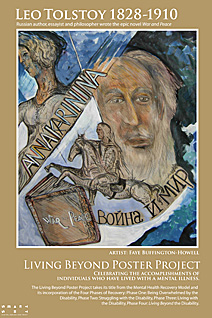 Falken, now 28, says he begged his mom and stepfather to get him treatment for his depression and anxiety, but they didn’t understand his illness. He struggled at school – “I just couldn’t do it.”— but they thought he wasn’t working hard enough. At 18, they kicked him out of the house.

“I was scared,” he said, looking with penetrating brown eyes.

“It’s been a journey,” Falken said, through joblessness and homelessness in a search for medications that keep the darkness at bay. Art became his lifeline. “If I don’t do my art, I drink or play video games.” He moves soon into stable housing, thanks to Resource.

Falken’s portrait of grunge rocker Cobain stems from his past.  “In my early teenage years, his music helped me cope with my depression. I was in so much turmoil and darkness.”

There was discussion whether Cobain should be included in the show.  Singer, songwriter, guitarist with Nirvana, he became a drug addict and died of what was ruled a self-inflicted gunshot.

“We asked, ‘Are we going to honor folks who had mental illness and then committed suicide?’ ” Rice explained. But the group decided, she said, that “if people can do shows that honor cancer victims, why would we not put a person in because they died?”

There’s community support at this studio, too, making art among friends. “I can talk here about stuff I can’t talk to my therapist about,” said Furnas, who has achieved celebrity of her own, doing solo art shows and accepting commissions.  “I’m taking control of my life again,” she said.