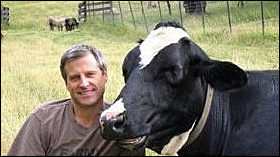 In Gene Baur‘s ideal world, everyone is vegan, and animal agriculture (yep, cheese and dairy included) is nothing more than a historical curiosity.

Given current farming practices, that’s about as plausible as flying pigs.

And Baur knows it.

What he’s after is promoting the argument that animals have rights and are not simply a commodity, along with elevating people’s consciousness of the animal products they eat and the methods — confinement, heavy doses of antibiotics, branding, force feeding, etc. — sometimes used to bring them to the dinner table.

In that process, he hopes to radically revise the country’s consolidated, heavily subsidized, and meat-and-dairy-heavy agricultural system.

Baur is the founder of Farm Sanctuary, a national organization that advocates against the mistreatment of farm animals and, more broadly, against the consumption of animal products. He’s in Minneapolis today and Saturday promoting his new book, “Farm Sanctuary: Changing Hearts and Minds about Animals and Food,” which outlines the unsustainable nature of industrial agriculture and urges readers to go vegan — or, at least, to eat meat from humanely treated animals. (Details on Baur’s appearances are below).

“We want people to ask questions,” Baur said in a phone interview Thursday. “Is (the current system) the most efficient way to feed the world? Is it really? Should we kill animals? I don’t think so. We want people to challenge their assumptions and make choices that are consistent with their own interests and values.”

It’s worth pointing out that Baur and his organization, much like PETA and other groups with similar missions, is a divisive force in the agricultural community. Some people call him a hero. Some call him something else entirely, partly because of his organization’s reputation for aggressive lobbying against agribusinesses, and for working undercover to obtain photos and other evidence of animal mistreatment at farms.

It’s also worth pointing out the remarkable degree to which Farm Sanctuary and other groups, once regarded as fringe activist organizations, have become accepted and respected.

Could Baur have written his book 20 years ago (shortly after he founded Farm Sanctuary) and expected it to hit both the Los Angeles Times and Boston Globe bestseller lists, as it recently did? Yeah, and pigs fly.

Nonpartisan voices chiming in
There’s no single answer for the shift, though sharp increases in diseases like obesity and diabetes, combined with the burgeoning organic and local food movements and a rash of product recalls in recent years (the largest meat recall in history a few months ago and last year’s spinach scare, to name a few), have raised people’s general consciousness about the food they consume.

Vegetarianism and veganism are more widely accepted as health choices, rather than political statements — though not completely, if anyone remembers the modest backlash that occurred when the Star Tribune earlier this year covered Twins reliever Pat Neshek’s veganism.

And it certainly helps that a chorus of nonpartisan voices have begun to chime in.

The latest comes from an extensive Pew Commission report released a month ago, which concluded, in so many words, that the current animal agriculture system needs to be thrown out, noting the lobbying power of a largely consolidated livestock industry, along with a variety of human health and environmental concerns stemming from vague policies and poor regulation, as top reasons.

Baur, for his part, is a classic muckraker type, talented at digging up information and presenting it lucidly to everyone from congressional committees to farm fest attendees. He’s eager to debate but reluctant to preach. While his core argument is an emotional one — that animals have feelings, too, and should have rights similar to humans — he argues logically, with studies and facts and policies.

He’s anti-system, not anti-farmer, though he believes that there needs to be “some innovators to show us a different way. … People have to think outside the box, go against the grain, and challenge the current systems and the current institutions.”

All he wants is people to start asking questions, start talking, start learning about the meat and dairy on their plates and the systems that put it there.

“With awareness, consumers will begin to make more sensible choices, more healthy choices,” Baur said. ” … As the true costs of our chic food become more well understood, I think not only will we see personal choices moving in a better direction, but see some policy changes moving the same way.”

Baur is an optimist. He figures that if people ask deep questions and challenge entrenched beliefs and fight to change systems that haven’t been touched in decades (and, in some cases, centuries) you just never know what could happen — one day, pigs might just fly.

Gene Baur will appear twice in Minneapolis as part of his book tour. Today’s event is free and open to the public; attending the Saturday speech requires a registration fee for the conference.