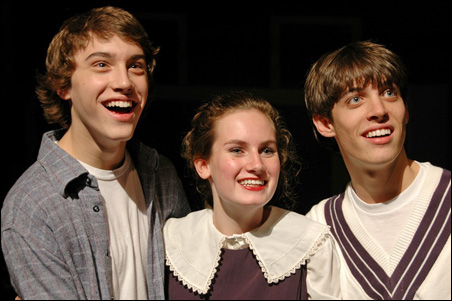 A veteran of the Guthrie Theater, Children’s Theatre Company and Chanhassen Dinner Theatre, actor Nate Irvin has spent enough time in musical theater to know how to handle the limelight: When asked about your current production, first spread the glory.

Praise the playwright and/or composer for his or her willingness to take risks; praise the ensemble for its attunement to the spirit of the work; and of course, praise everyone behind the scenes for making it all look effortless. Don’t mention your own accolades until asked directly, and then make sure to credit your critics for pushing you further atop your game.

Lately, Irvin has been doling out kudos to a cast and crew that last fall staged a little-known British musical at Minnetonka Senior High, where Irvin, 16, is finishing his sophomore year. In November, Irvin reprised the role of Eddie Lyons in “Blood Brothers,” the story of two siblings who are separated at birth, grow up in the same community in very different social classes, and encounter one another as adults.

After the show’s three-weekend run, he received reviews from three professionals as a part of the Spotlight Musical Theatre Program, an annual effort by the Hennepin Theatre Trust to bring together professionals and budding talent. (A video about the program can be found here.)

Their advice: “Think more about spatial stuff, consider the way you use your hands,” Irvin recalls. “You’re not being big enough on stage. Go ahead and make bolder decisions.

“Seeing the continuity in what they say — oh my, that’s really useful,” he says. “It’s that outside eye.”

‘Tonys for Teens’
These fine points aside, the reviewers gave Minnetonka’s production their highest honor, “outstanding performance by an ensemble,” and singled Irvin out for equal distinction. Sunday night (June 8), he and the rest of the cast will join performers and crew members from 25 other metro-area high schools for an awards ceremony at the Orpheum Theatre in Minneapolis. Luminaries from the Twin Cities theater and education communities will hand out accolades and enjoy dancing, singing and acting by some 85 honorees.

On Saturday, participants can polish their skills at workshops on such topics as auditioning and improv taught by performing arts professionals. The cost is $25 per student. It’s the first time students from different schools will meet one another.

Students’ parents, friends and schoolmates will be in attendance the following evening, but so will plenty of theater district patrons who’ve come to understand that the Spotlight awards ceremony is terrific musical theater by any standard, said Ann Kim, manager of education and community programs for the Trust, the nonprofit that owns Minneapolis’s Orpheum, State and Pantages theaters.

“We’ve already sold an unbelievable amount of tickets,” she said. “Every year we have people come for the first time who are patrons of the Hennepin Theatre District or members of the community or trust and they’re just blown away.”

There are plenty of programs that recognize high school athletes and academic all-stars, said Karen Nelson, the trust’s public relations manager. Consider the Spotlight awards “kind of like a ‘Tonys for Teens,’ ” she said, in reference to the Broadway awards. “There’s not as much acknowledging the immense amount of time and talent that go into these musical productions.

“People don’t emerge fully formed as stars on Broadway,” Nelson added. “A lot of them come through their high school musical programs.”

Spotlight began in 2000, but was suspended after two years for lack of funds. The Hennepin Theatre Trust revived the program in 2005; its visibility has increased steadily since then. The cost of the program is underwritten by the trust; schools pay just $75 per year. Organizers hope eventually to have the resources to take the program statewide.

“We receive individual donations here and there, but what we’re really looking for is one main corporate sponsor,” said Kim. “These students could very well come back on our stage some day in a ‘Wicked’ or a ‘Lion King.’ ”

A complete list of Spotlight winners can be found here (PDF). Tickets to Sunday night’s show are $10 and are available through Ticketmaster, online, or by calling 612-373-5696.