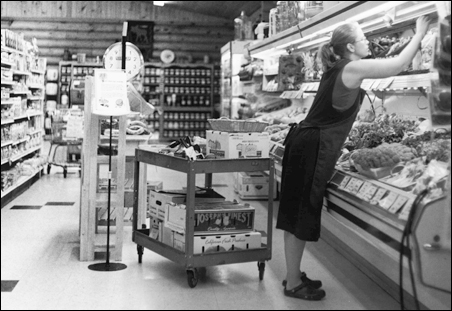 Just a senior project, nothing too expansive; something focused and finished off-campus, something to cap his self-designed political gastronomics major at Antioch College in Ohio.

Trouble was, Martin Brown couldn’t settle on a topic. Tried a few things. Failed. Burned out then ran out of ideas. Everyone had to do one, and everyone did except him. Come May, one senior project short of credits, he watched as the class of 2007 walked down the graduation aisle.

Summer came and Brown went home to Northfield, Minn., moved in with his parents, and began work at his old job, stocking produce at the Just Food Natural Market.

And that’s when it came, not as a vision as much as a seed, a tangible sign of what could be. He can’t quite place the when, maybe while heading home, while standing in the co-op aisle with vegetables in hand. But what did the circumstances matter?

He had his idea.

‘PoliGastron’ confluence
It was a perfect “PoliGastron” confluence: communications, anthropology and environmental science. Research and document the history of struggles of Minnesota’s food and other consumer cooperatives. Immediately, everything he loved about the co-op returned: the people, the business model, the ability to work with his hands.

He realized that he needed to connect with his community — to begin to define home.

Brown spent two months working at the Northfield market, using his spare time to read and build research questions and make connections with co-ops founders and workers across the state.

Then he spent a month on the road, starting in the Iron Range and moving south to the Twin Cities, conducting dozens of interviews and continuing his research. He used an old medium-format camera to shoot portraits of the folks he interviewed.

One day at a historical society in Virginia, an employee asked him, “Is this research for your Ph.D.?”

And that’s when Brown realized that his work had already grown larger than any graduation requirement.

That fall, he began transcribing and writing, structuring his project as an oral history of Minnesota’s two main co-op movements: the Northern Tier movement and the New Wave.

Defining the co-op movements
Finnish immigrants started the former movement in the early 20th century, largely in response to language barriers and feeling unwelcome in the anti-union miners’ stores that crisscrossed the Iron Range. Young counterculture types led the latter in the 1960s and 1970s, spurred by a desire to offer unrefined, bulk and other types of foods not found in typical grocery stores.

In early 2008, 25-year-old Brown moved to Northeast Minneapolis and began working at the Eastside Co-op. He landed a few grants, which paid for printing copies of his project titled “Legacies and Impacts: A Qualitative Exploration of Minnesota’s Consumer Cooperatives.”

When he finished the project, he returned to Antioch to show it. And then he brought it to a conference in Portland, Ore. And then to Virginia, Minn., and then to the Eastside Co-op, where it has been featured since July.

It’s a fascinating piece of oral history — interviews combined with candid portraits. The project isn’t exhaustive — Brown is even thinking about doing a second one, building off everything he learned the first time out — but there’s a resolute intimacy to both the words and photographs that makes for a compelling read.

When Brown’s exhibit closes Sunday at the Eastside Co-op, he’ll take it to display at his old employer in Northfield. Then it’s off to Duluth in October and back to Minneapolis in 2009, when the Seward Co-op is slated to open its new location.

And after that, well, he isn’t sure. He’s thinking about moving on, exploring other projects, other cities.

But he’s also thinking about settling in and exploring the new community he’s discovered, while working on what turned out to be anything but a senior project.

Brown’s still processing what he’s learned and what he’ll carry with him. Working on the project taught Brown all about the word he believed in but never really understood — co-op — and the struggles and successes and politics that define it.

It certainly taught him how to transcribe — he ended up with more than 300 pages of conversations, all recorded with an old transcribing machine.

Most importantly it taught him the power of community-based media — contributions from many voices, not just one — and how one project can connect similar-minded folks who have never met, and likely won’t. He plans to take that knowledge and use it to connect and give a voice to other communities.

What: The closing reception for Martin Brown’s “Legacies and Impacts: A Qualitative Exploration of Minnesota’s Consumer Cooperatives.”
When: 6 p.m.-8 p.m. Sunday (Aug. 17)
Where: Eastside Co-op, 2551 Central Ave., Northeast Minneapolis
Details: View a selection of Brown’s portraits of subjects and read sections of the book. Brown will discuss his project at 7 p.m.