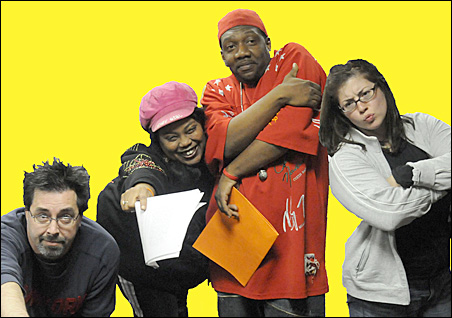 Shawna and Rick and Marvin and Caroline: they’re just like me. Only they can act and sing and — oh, yes — some of them have known firsthand what it’s like to be homeless.

This little group and their fellow actors aim to turn the amorphous condition called homelessness into real people.

And seeing and hearing them Thursday tell their stories in a bold and bright little play called “Housed and Homeless (From the Very Same Cup),” it seems they’ve accomplished just that.

“It’s not ‘these people,’ it’s us,” said Lecia Grossman, the driving force behind the zAmya (that’s Sanskrit for “aiming for peace”), a community theater troop she started about five years ago to increase awareness and understanding of homelessness and inspire people to end it.

And what better time for their storytelling than now, this being National Hunger and Homelessness Awareness Week?  And being that at last count — which was three years ago — each night in this state there were more than 9,000 homeless people, 3,000 of them children, according to Wilder Research. (Another tally was taken just last month but the numbers aren’t out yet.)

And what better time than this week when Hennepin County Medical Center, the so-called safety net hospital, is pleading for more money to care for the uninsured, which, naturally includes homeless persons.

About a dozen performers, including some recruited from homeless shelters and soup lines like Loaves and Fishes, brought their tales to some 150 physicians and doctors in training and other staff at HCMC, one of a series of free performances this week. That’s thanks to the Metropolitan Regional Arts Council through appropriations from the Legislature, COMPAS Community Arts program, the McKnight Foundation and others, and particularly St. Stephen’s Human Services, which adopted the theater project recently. The last performances are this weekend at 6 p.m. Saturday at St. Vincent De Paul Church in Brooklyn Park and at 4 p.m. Sunday at Bedlam Theater in Minneapolis. Details are here. [PDF]

‘Stop staring’
Grossman, intense and energetic, wants to open people’s eyes to the world around them, to get them to “stop staring and start seeing” the poorer among us, she said.

So she recruited playwright Corey Walton to write a thought-provoking production that melds humor and sadness in the telling of its performers’ life stories. About half of the cast is homeless, or has been. They’ve lived in tents or cars or shelters. They’ve struggled with chemical addiction or mental illness or experienced foreclosure.

There’s Shawna Geshick, for instance, who pulls at our heart strings by sharing how she was on her own at age 13 and pregnant by 15, became overwhelmed by addiction and lost custody of her children. But now, she says, “I’m sober.” She’s working to be reunited with her children, to earn a high-school equivalency degree and attend cosmetology school.

And Rick Brinda, who lived in a tent nine years, abusing alcohol and drugs, but is reclaiming his life.

Audience members, many in white coats, some with stethoscopes draped over their shoulders, sat transfixed, some eyes tearing when one cast member told how his addiction estranged him from his mother, that he wasn’t there when she died and will regret that always.

As part of the production the audience was asked: If homelessness is the symptom, what is the bigger problem? The question prompted answers like these: circumstances, apathy, lack of jobs, addiction and selfishness.

‘He said it all’
Discussion followed the performance.

From the audience, a male doc: “When I see patients like this, I feel helpless.”

“It’s a microcosm of what an awful lot of people face. I believe at least 30 percent of our GMAC patients are homeless,” said Mike Harrithal, vice president for public policy for HCMC. (GMAC is General Assistance Medical Care, a state program for the indigent that is scheduled to end next spring.)

“He said it all,” said Caroline Mannhelmer, a song-writer and cast member.

Medical student Dane Johnson described the performance as “really unique and touching” because it shared people’s real stories. “The message is really going to stick with one,” he said.

That’s what the show’s all about, said Ellen Coffey, an HCMC doc who saw the group about a year ago and coaxed them to perform on her turf.

“I would like to have everyone see this show,” she said, explaining how medical center staff interacts daily with homeless people and others going through hard times. “We often don’t have the luxury of listening to their stories,” she said.