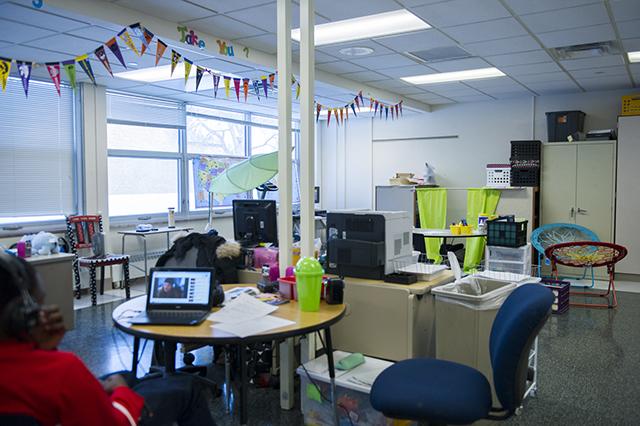 Photo by Kim Palmer
A student watches a video in Robbinsdale Middle School’s PRIDE room, a space started this year for students being disciplined, who would have received out-of-school suspensions last year.

Last year, students at Robbinsdale Middle School who were caught fighting were automatically given an out-of-school suspension for five days. Now, they are sent to the PRIDE room, an in-school space opened this past fall for students being disciplined.

Bouncy chairs, stress balls and an exercise bike are spread throughout the room for students with pent-up energy. A curtained-off area with bean bag chairs is available for those who need to be alone and calm down. At the top of every desk sits a reminder to students: “This is a working zone. You will be academically successful in PRIDE. Please regroup and remind yourself that opting out is not an option.”

The room is part of Robbinsdale’s districtwide effort to reduce the overall number of suspensions and eradicate racial disparities in discipline rates. In the 2012-2013 school year, the most recent for which data is available, black students, who make up about 30 percent of Robbinsdale’s enrollment, received 35 out-of-school suspensions or expulsions for every 100 students, compared to 6 for every 100 white students.

“Last year, looking at all the kids I had to suspend was just heartbreaking,” said Assistant Principal Shaunece Smith. “We’re sending kids home when they could be here with us.”

It’s not just Robbinsdale. Black students in Minnesota, despite making up just over 10 percent of the state’s enrollment, received nearly 40 percent of out-of-school suspensions and expulsions in the 2012-2013 school year. In fact, according to an analysis of all 77 districts in the state that suspended at least five white and five black students that year (and therefore were required to report the exact numbers), nearly two-thirds of those districts suspended black students at triple the rate they did for white students. And though suspension and expulsion rates fell statewide from 2010-11 to 2012-13, they dropped faster for white students than they did for black students in all 73 districts that had data available.

Those numbers aren’t improving fast enough for the Rev. Paul Slack, the president of ISAIAH – a faith-based group working to close the discipline gap. Last spring, the group challenged all schools to immediately end suspensions for nonviolent offenses, like being disruptive in class, but only two schools have done so: North View Junior High in the Osseo School District and the FAIR School.  “As long as we say we have to phase things in, I doubt we’re going to get where we need to be,” Slack said.

ISAIAH is working with the suburban Robbinsdale and Osseo districts, but neither has made the commitment the group requested. Aldo Sicoli, Robbinsdale’s superintendent, said the ultimate goal is to have no suspensions, but that it’s not a policy change that can be made immediately. “If you’ve been doing things a certain way, it takes time,” he said.

The hope is that PRIDE, and other programs, will keep more kids in school and on track with their school work, ultimately reducing another big gap: the difference in black and white student achievement. (In Minnesota, roughly a third of black students pass state reading and writing tests, while two-thirds of white students do, according to state data.)

By mid-November, Robbinsdale had reduced suspension rates by nearly 80 percent for both black and white students compared to the same time in 2013. But administrators said black students — two-fifths of the nearly 1,500 students at the middle school — are still over-represented in the PRIDE room.

To Slack, this raises concerns that alternative-to-suspension rooms could lead to in-school segregation. “Creating another room is not the answer,” he said, adding that staff must figure out “what was wrong in the first place from the kid’s perspective?” 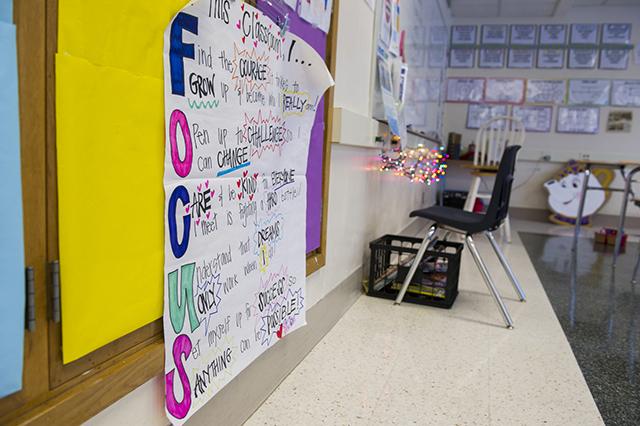 Photo by Kim Palmer
Robbinsdale Middle School’s PRIDE room, an alternative-to-suspension room for students being disciplined, is full of posters reminding students how to behave in class.

It’s a question PRIDE room teacher Gretchen Enselein tries to answer every day, as she works with an ever-changing group of students to guide them through the lessons they are missing in their regular classrooms.

One day in October, all four students in the room were black. Two eighth-grade boys talked after wrapping up a lesson on sedimentary rocks. Another student had just completed an assignment on cell vocabulary, when the door opened and a new student came in, clearly upset. Enselein let her pick her desk — far away from the boys — and immediately brought the girl some noise-canceling headphones, asking, “What else can I do to help you?”

Academics are important; some students end up in the program only because they’re struggling in other classes. Students in PRIDE keep to a strict schedule to cover all subjects – and then some extras, like service learning. However, discussing and improving behavior is as crucial as academics for those who are sent to the room for being disobedient.

Towanna Williams, who is African-American, has a son in the seventh grade and a daughter who is a senior in high school. Her children were both suspended out of Robbinsdale schools three times last year, primarily for fighting. Williams says that the schools did not pay attention to the circumstances around the fights, like bullying and her children’s special needs.

She added that her daughter is not given time and space to calm down – even when she asks for it – and her son still doesn’t grasp what the punishment means. As far as he knows, she said, a suspension means, “I don’t get to shop at the school store.”

Williams and Slack argue that the onus for behavioral change shouldn’t be just on students, but on staff as well. Many school administrators agree.

School districts in Minnesota are using the Courageous Conversations about Race program. Based on a 2006 book of the same name, the nationwide program tries to battle systemic racism in education by training teachers to be more sensitive to cultural differences when deciding punishment and tries to force some tough conversations about race. However, critics elsewhere in the country have said use of Courageous Conversations has failed to result in improvements and tend to make white teachers feel guilty.

“We can’t say we’re going to avoid the training because it might make us feel uncomfortable,” said Superintendent Sicoli of Robbinsdale.

Nationwide, most suspensions for all students are based on subjective calls, like disrupting a class or talking back to a teacher. In Minnesota, for instance, nearly 40 percent of all suspensions and expulsions in 2012-2013 were for “disorderly/disruptive” behavior. Black students receive a disproportionate share of these types of punishments, leading many experts to argue that the country’s mostly white teaching force may respond differently to similar behavior from black and white students. 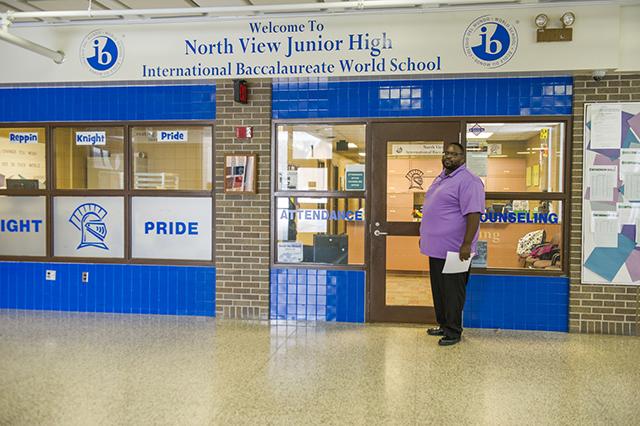 Photo by Kim Palmer
Assistant Principal Jamil Payton has taken charge of the ban on suspensions for non-violent behavior, like talking back in class, at North View Junior High in the Osseo School District.

Jamil Payton, assistant principal of Osseo North View Junior High, who has led the school’s ban on nonviolent suspensions, says that’s been true in his school and district. Ninety percent of teachers in Osseo are white, while half of the students are minorities. At North View, black students make up 40 percent of the student body.

Superintendent Kate Maguire says that talking about race and confronting the harsh discrepancies in Osseo is necessary. “The alternative is we can do the same thing we’ve always done,” she said. “We’re trying to help people to understand what is the systemic nature of racism that might exist in schools.”

Such conversations have helped at North View, Payton says – as have new systems. Teachers are now required to try three interventions in the classroom for behavior problems, like having a conference with parents or even just talking to the student about the problem. If these don’t work, the school then has a place similar to a PRIDE room to send students.

“It ultimately is about re-teaching and giving kids chances,” Payton said. “No kid comes to school wanting to get in trouble.”

This story was produced by The Hechinger Report, a nonprofit, independent news website focused on inequality and innovation in education.

In Minnesota, the discipline gap isn’t only an urban problem

By Sarah Butrymowicz, The Hechinger Report