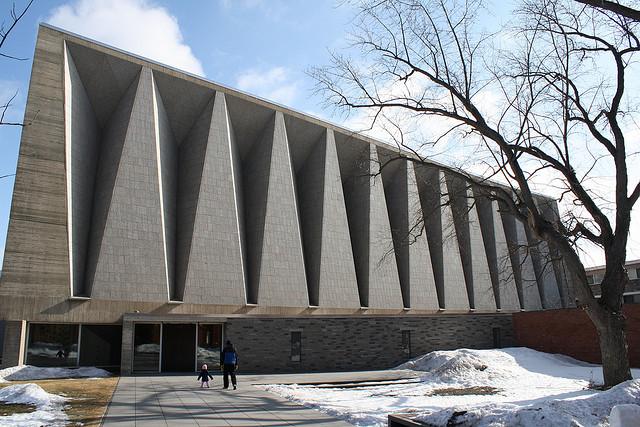 Graduates of St. John’s University go on to earn salaries of $56,000 on average, the highest of any public or private, nonprofit university in the state — but the school’s average annual costs are thousands of dollars above the national average. Carleton College in Northfield has the highest graduation rate, with 93 percent of students finishing. The University of St. Thomas charges students the most in annual costs, but holds above average ratings in graduation (75 percent) and salary after attending ($54,300).

These are a few gleanings from the federal government’s newly released College Scorecard, a fascinating digital tool for assessing the costs and benefits of higher education programs across the country.

Some caveats: The data come from student financial aid records and federal tax returns. The scorecard is not a perfect gauge of what makes a good school. It does not, for example, rank the quality of schools, as the Obama administration had previously proposed. But it still offers comprehensive look at key factors for prospective students hunting for the right college.

We recommend playing around with the metrics yourself, but below are a few more highlights from the data: 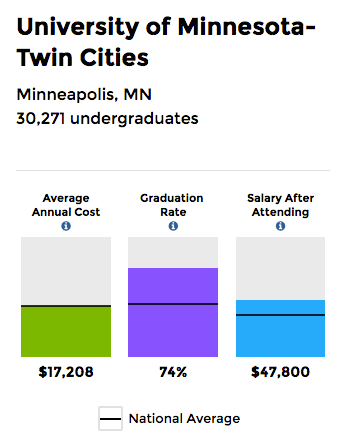 • Despite raising tuition in recent years, the University of Minnesota-Twin Cities still offers plenty of bang for your buck. The school costs about $17,000 annually, right on the national average mark of $16,789. About three of every four students go the distance, and the average salary for alums is $48,000 — both metrics being above national average. Undergrads typically come out with $21,500 in debt.

• Community colleges and private, for-profit schools account for the lowest graduation rates. At Minneapolis Community and Technical College, only 15 percent finished. Nineteen percent graduated from Century College. A dismal 12 percent completed degrees at the Twin Cities campus of the for-profit University of Phoenix — despite annual costs north of $20,000.

• Mankato and St. Cloud state had solid showings in the MnSCU system. They both charge about $14,000 annually — below the national average — while graduation rates and salary after completion both rank above average. Students from both schools typically leave with about $23,000 in debt.

• Across the river, the University of Wisconsin-Madison had the highest graduation rate for public and nonprofit private schools, with 82 percent finishing their undergraduate programs. Annual costs hit slightly above the average mark at $18,000, but alumni made above the national average in yearly earnings ($51,000). Milwaukee School of Engineering had the highest average salaries for graduates, at about $66,000, though annual costs were also above average.

For more information on this data from a national perspective, read Kevin Carey’s post about it written for the New York Times’ The Upshot.

Which Minnesota colleges offer the most bang for the tuition buck? A new federal scorecard allows students to find out