On a summer morning, a gaggle of high school kids of all races and economic backgrounds swarm onto the Augsburg College campus in Minneapolis’ Cedar-Riverside neighborhood at an uncharacteristically early hour.

Welcome to Urban Scrubs Camp 2015, a weeklong immersion in health-care careers attended by 76 students in early July. Fifty-seven more students attended another scrubs camp at Saint Paul College later in the month. At both camps, young people got firsthand experience about what it’s like to work in the health-care field from real-life professionals and college instructors.

Two hours into their day, in one of Augsburg’s science classrooms, scrubs campers are learning lab procedures about glucose levels, blood cell counts, toxicology and blood types. This is not only hands-on learning; it’s surgical-gloves-on learning.

Maia Maiden, Medical Lab Technician Program coordinator at Rasmussen College, shows them how to use a dropper to apply urine samples onto glass slides for a toxicology study, stressing there is no room for error.  “If I report to the doctor that someone has cocaine in their system, there will be some consequences if I am wrong,” she explains.

Maiden tells students that a B.S. degree opened the door to her first job as medical lab technician at Hennepin County Medical Center. She then asks about their own career aspirations.  “I want to be a pharmacist,” pipes up one student, followed by … “a surgeon”… “a nurse”… an anesthesiologist.” One young woman who has been quiet until now, answers,  “I’m thinking your job must be fun and interesting.”

“Many of our students were not aware that some of these jobs even existed before coming to camp,” says Tracy Wilson, director of Workforce Training and Continuing Education at Saint Paul College.

Attendees at both camps are a diverse bunch. Augsburg’s campers are approximately one-third white, one-third African-American, one-quarter Asian or Asian-American and 10 percent Latino. More than half are from low-income households. In a survey given at the end of the camp, 83 percent said the camp convinced them to think more seriously about attending college.

Saint Paul College campers were approximately half Asian or Asian-American, a quarter white, and 9 percent African-American. About three-quarters received scholarships. Survey results found that 82 percent could better visualize themselves in college.

At the Augsburg camp’s graduation ceremony, Hafsa Hassan told her fellow campers, “I came here … a shy person, not knowing many of you and not knowing what was in store for me.  Now, at the end of just one week, you are my friends and I am excited about college and a job in health care.” She is a senior at Minneapolis Southwest High School and will be the first in her family to attend college.

“The graduation is a point of pride to a lot of the families where no one has ever been to college,” says Laura Beeth, system director talent acquisition for Fairview Health Services. “They invite everyone in the family.”

And that’s not the end of the experience. Some students come back as counselors, gaining leadership experience and skills.

Jicarra Holman, an African-American high school student from Minneapolis who attended the Augsburg camp in 2009 and came back as a counselor the next year, now works as a mental health counselor at the South Metro Home Services after earning a psychology degree at St. Catherine University. She’s also training to become an officer in the National Guard.

“It was a wonderful opportunity to learn about health care,” she remembers. “I just soaked it all in. The science I learned there came in useful later on, and having experience as a counselor on my résumé has led to a number of other positions.”

“We want to give them a glimpse of what these careers look like, and something of a college experience that makes the possibility seem more real to them,” explains Augsburg President Paul Pribbenow.

Pribbenow is also chair of the Central Corridor Anchor Partnership (CCAP), a collaboration between a dozen colleges and hospitals along the Central Corridor between downtown Minneapolis and downtown St. Paul, which account for 67,000 employees.  Since 2012, these “anchor institutions” have worked together to boost economic prospects and social conditions in the inner city neighborhoods surrounding their institutions — focusing on improving access to transportation, leveraging the buying power of these institutions, and providing job and educational opportunities for local residents.

With seven major medical facilities located near the Green Line light rail, the health-care field looks promising for inner-city youth in Minneapolis and St. Paul. After earning a two-year or four-year degree, they can get a steady well-paying job with ample opportunity for advancement at one of the medical facilities in the Central Corridor.

That’s why CCAP supports the Augsburg Urban Scrubs Camp, (launched in 2010 as a project of the Cedar Riverside Partnership) and the Saint Paul College camp (launched in 2013). Both are modeled on a similar camp started at Winona State University in 2008 by Healthforce Minnesota, which is also involved with the two Twin Cities camps as well as others for high school or middle school students in Winona, Rochester, Mankato, Fergus Falls, Bemidji and Dakota County.  As far as anyone knows, this program is unique in the U.S.

Reaching out to Somali students

Fairview and Augsburg make a particular point of recruiting Somali students from the Cedar-Riverside community adjacent to their campuses, reaching out to leaders at the Brian Coyle Community Center, the African Development Center, the West Bank Community Coalition, the Cedar Riverside Partnership, the Riverside Plaza housing complex and other organizations to spread the word and raise money for scholarships.

The Central Corridor Anchor Partnership is also behind the Central Corridor College Fellows Partnership (C3 Fellows), which since 2014 has helped more than 100 inner city students land full or part-time jobs in the health care field while still in school. The program is open to all students from Minneapolis and St. Paul majoring in health care-related fields at Saint Paul College and Minneapolis Community & Technical College (MCTC). 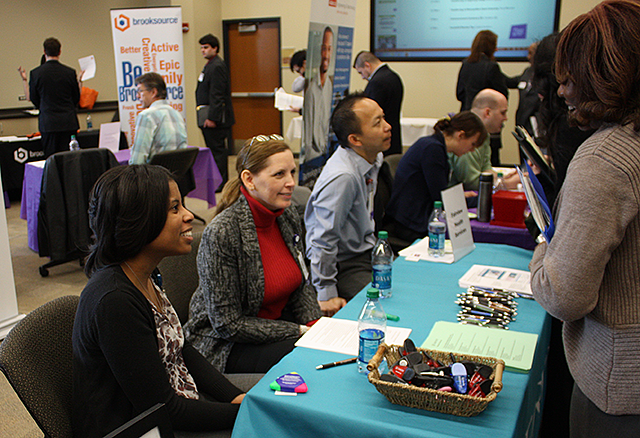 Since most students at two-year colleges must work in order to afford tuition, this represents a significant benefit, says MCTC Vice President Mike Christenson. “They are getting a résumé boost in their intended field along with a big bump in pay. Work/study students average $9.50 an hour, while C3 fellows make $14.44 on average in their field of study. This is important for students who might otherwise leave college for economic reasons. It’s a big win for wage and career at once. And it helps MCTC address our biggest problem — retention.”

And low-income students aren’t the only winners with both of these programs. Regions Hospital CEO Megan Remark notes, “For health-care employers, this is about growing a local work force that more closely mirrors our patients.”

“Initiatives like these are important for our region’s economic success,” offers Eric Muschler, program officer at the McKnight Foundation, which helps fund both programs. “We’re heading toward a labor shortage over the next 15 years as baby boomers retire, so training qualified workers in competitive sectors is crucial to the region’s future.”

It’s a hectic morning early in the fall semester, and students are lined up outside Brian Mogren’s office at MCTC. Mogren, director of Health Care Partnerships at Saint Paul College, administers the C3 Fellows Program on both campuses, traveling back and forth across the river.

Bi (Alfred) Djei, 37, an immigrant from the Ivory Coast who is studying business administration at MCTC, is employed sterilizing surgical equipment for Regions Hospital in St. Paul thanks to the program. It’s a full time position that accommodates his schedule as a student and a new father by offering both daytime and evening hours.

“My goal is to work in health care on the management side,” says Djei, who was an event planner back in the Ivory Coast. “So the job helps me learn more about how teams work and set goals. The Fellows helps me make the most of both my school and my job. And I feel supported because I can call or email Brian with any questions I have.”

Ash Irons, 27, studying to become an RN, saw a flier about the C3 program on campus. “I was hitting a wall in trying to get nursing assistant jobs. It was super discouraging.  I needed a mentor to help lead me in the direction I wanted to go.”

Now she’s working as a health unit coordinator/nursing assistant at Gillette Childrens Specialty Healthcare in St. Paul. “While getting paid I am able to observe the profession.  I’m in the room with nurses all the time. I see what I will be doing. I plan to stay with this job until I’m done with nursing school, and I hope to apply for a job at Gillette.”

Many students at community colleges are not is a position to take unpaid internships, Mogren notes, “so a job is how they can connect to the work they want to do and get real-world experience.”

“We help them understand what they need to do to apply for a job in the health-care field,” Mogren explains. “How to build a résumé. How to customize their cover letter for a particular job. Help them show their skill sets, and help them realize they may have valuable experience they don’t think of — language skills, technical skills, taking care of sick relatives.”

Even before they find jobs, students in the program are eligible for free training to get certificates in first aid, CPR, and basic life support, which are sometimes required for entry-level health-care jobs.  They can attend C3 tours of health-care institutions like Fairview and Jones-Harrison assisted living facility, and meet with health-care professionals and employers who visit the campuses.

“This all gives them an idea of the different aspects of health care, and helps them decide what in particular they most want to do,” Mogren explains.

“Everything we do help the students present themselves in a meaningful way to employers,” he adds. “And to know which jobs they qualify for.”