When second-graders come in to Bryce Jacobson’s media classroom for their 25-minute coding lessons, they know the drill. After briefly touching base, they disperse across the library — crawling into bookshelf cubbies or sprawling out on the floor — and log into their coding program on their iPads.

Seated at a table, Kendall Malin, 8, begins sequencing arrows and commands to guide an animated bee through a garden. Once she passes this level, she will have written more than 100 lines of code.

But it’s more than a game. She’s learning to program, she explained, noting it’s useful “if you want to be someone who works on computers.”

Stuck on a coding problem pictured with a zombie, Ada Geisler, 8, leaned over to ask Kendall for help and the two tackled the problem together.

It’s this type of collaborative effort that Jacobson encourages, especially when it comes to coding lessons.

“Creativity, problem solving, collaboration are the big pieces of this,” he said of the newly implemented coding lessons.

Belle Plaine Public Schools paired each student with an iPad last year, bringing Jacobson on board to help guide the integration of new technology in the classroom. His enthusiasm for coding, paired with encouragement from district leadership, has put Chatfield Elementary on the map as one of Minnesota’s newest coding-savvy schools.

Having introduced the program to second-graders this fall, using applications created by the nonprofit Code.org, the district plans to pilot a K-2 program next year, with plans to scale up to a K-12 program in the near future.

“As we go forward, we’re going to continue to make sure our programming is preparing our kids for the world they’re going into, not the world they came from,” Superintendent Ryan Laager said. “I’m really excited to watch the development of these kids, not only as they do coding in K-2, but as they move through the system. I think we’re going to see enhanced skills in mathematics, creativity and spacial awareness, and all the things that come with coding.”

Completing his first year with the district, Laager frames coding as the language that’s going to propel his students into the 21st century work force — where accountants, information technology specialists, and a whole swath of professions that don’t even exist yet will require coding skills.

In Minnesota alone, Code.org reports there are roughly 15,000 open computing jobs, offering an average salary of $84,705. With a mere 8 percent of STEM graduates specializing in computer science nationwide, only 1 in 4 Minnesota schools have taken it upon themselves to start preparing their students to fill this employee gap.

A few years back, Minnetonka took the lead in committing resources to the development and implementation of a K-12 coding curriculum dubbed “Tonka CODES.” While the curriculum has garnered widespread support, it’s not monitored by the Minnesota Department of Education. 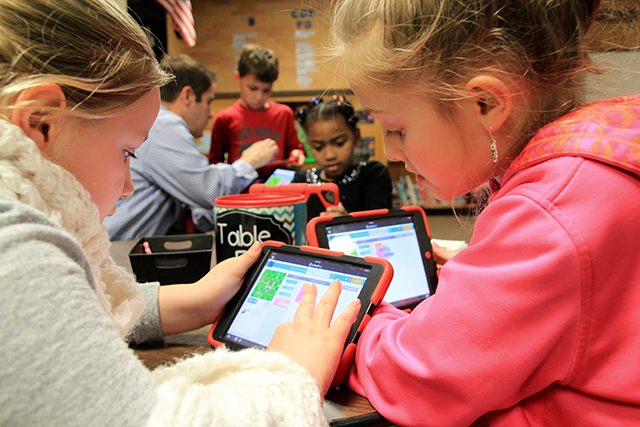 The department doesn’t track which schools and districts teach coding because it’s not categorized as a state education standard with explicit benchmarks. However, Director of Academic Standards Beth Aune says there are lots of skills crossover when it comes to preparing students to meet math and language arts standards. Coding reinforces skills in algebra, sequencing and logical thinking, to name a few.

In the wake of President Barack Obama’s Computer Science for All initiative, which calls for  additional funding to support computer science education at the K-12 level, Aune suspects local interest in adopting coding curriculums will continue to grow.

Minnesota is currently one of 28 states that allows computer science to count toward a high school math or science requirement.

There’s also a push to allow coding to fulfill the foreign language requirement.

In Belle Plaine, Laager may not be advocating for this quite yet. But he’s already framing coding as a universal language, best learned at an early age.

“The thing we know about language development is the younger they start it, the more fluent they’ll become in it,” he said.

The death of the signature?

With all the hype over bringing coding into the fold as a cutting edge skill set, cursive handwriting seems to be losing momentum. In its 2008 review of state English Language standards, the Minnesota Department of Education determined cursive writing was not essential to include in the new standards, Aune explained.

While it does still hold value — both as an artistic form of expression that taps into different parts of the brain, and a key to translating historical documents like our nation’s Declaration of Independence  —  schools and districts aren’t required to teach it.

To be clear, the concurrent demise of cursive and rise of coding doesn’t necessarily mean educators see this as a simple trade-out.

“I consider handwriting and coding two very different things. It’s not even comparing apples to oranges because they’re not two examples of fruits,” Aune said. “I suspect that if a district is making a substitution of handwriting for coding, they’re doing it to buy instructional time.”

In Belle Plaine, cursive handwriting is still hanging on. It’s taught to all third-graders, with the expectation that by fourth grade they have acquired that skill set, says Principal Liann Hanson. Prior, in grades K-2, students learn handwriting. In media class, for instance, they download letter worksheets on their iPads and trace the letters for practice. But that’s not to say things are set in stone.

“The reality is we’re not going to be signing our name much longer,” Laager said, adding pretty soon we’ll be using our fingerprints to authorize credit card transactions instead.

At the kindergarten level, students use bee robots to learn basic commands like “left” and “right.” Older students learn basic coding concepts like looping and logical sequencing through applications on their iPads and computers like Tynker, Lightbot, Scratch, and programs offered through Code.org.

“For the students, there’s a lot of excitement with it,” Jeremy Engebretson, the specialist spearheading the initiative in Minnetonka, said. “Some teachers implement it during a station time. For others, it’s a set time in their week.”

The district is looking to expand offerings to middle- and high-school students, he says, noting the focus would encompass bigger concepts under the computer-science umbrella, like digital citizenship and hardware and software skills.

In addition to the wide range of free online computer programming resources, Engebretson says he’s tapped into a supportive network of other leaders in this realm who hail from schools and districts across the nation, including New York City, Washington, Chicago, Florida and San Francisco.

“It isn’t a lot who are looking to do this systemic implementation right now,” he says of those looking to implement a formal coding curriculum. But with Obama’s Computer Science for All initiative, he also anticipates a renewed push for schools with fewer offerings to follow suit. 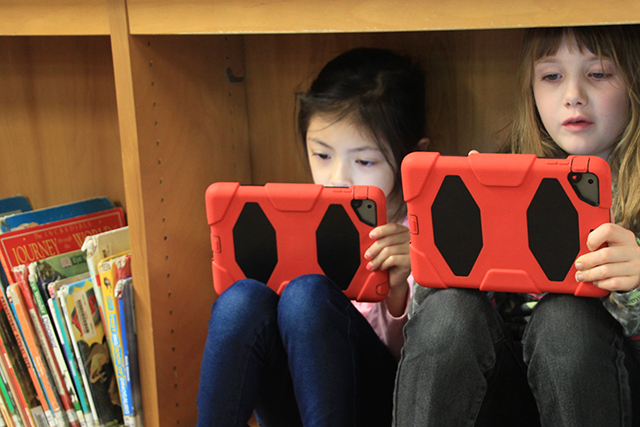 MinnPost photo by Erin Hinrichs
Bella Nguyen, 7, and Alexis Kamrowski, 7, work through their coding program on their iPads at their own pace.

“The idea of open source is essential to computer science,” he said. “We rely on one another’s code base to build our ideas. It’s collaborative at its core.”

Twarek, an education technology content specialist for the district, says computer science is considered a priority not just in terms of preparing students for specialized career paths, but also in terms of equipping them with a foundational knowledge and base in computing so they can continue to stay on top of new technologies as they evolve.

“Another reason that it’s incredibly important to start early is the idea of equity,” he said. “Currently, far fewer females and people of color make up the jobs in the tech industry.”

Looking at preliminary student progress reports in Belle Plaine, Jacobson says his two highest fliers are both boys who have opted to log into their coding programs at home because they’re hooked. One has already written 16,000 lines of code and the other has written 12,000 lines of code. There’s a handful of girls who are excelling as well, he said.

“I feel everyone should be exposed to it, just like anything else,” he said. “It’s such an exploratory time for kids. It instills the troubleshooting — the failure with the possibility for immediate success after failure.”

As students began telling their parents about the coding they were learning at school, school administrators say they started hearing more and more from parents in support of the new initiative.

One parent, Greg Rupp, emailed Principal Kim DeWitte after he realized his son was learning the building blocks that he himself used in his profession as an engineering manager. Not only does he see the value in teaching coding at the elementary level, but he also welcomes the enthusiasm his son has for logging into his coding apps from home.

“I think it’s fantastic. I’d much rather have him want to do some schoolwork rather than play video games with shooting,” he said.

Rupp says his son has a natural inclination for math, and he’s engaged in a friendly competition with some of his classmates to see who can create the most lines of code.

“Programming is used in most career fields nowadays,” he said, adding the programming principles prove just as valuable. “It [teaches] a logical process of thinking and it also emphasizes a lot of math. I think both are very important.”