During a meeting of the Minnesota Senate’s Education Committee meeting yesterday morning, Sen. Kevin Dahle, DFL-Northfield, previewed a bill that will seek to address the use of “inconsistent terminology” in the state’s existing teacher licensure statute.

The bill marks one of the first concrete attempts to act on a recent report by the state’s Office of the Legislative Auditor, which declared that the current teacher licensure system is “broken.” The auditors highlighted a lack of clarity in state statute, where some key terms are left undefined, as one of three major areas of concern.

But even a seemingly simple fix — an attempt to clarify the term “limited-term” teacher, which currently refers to three separate teacher statuses, for example — raised concern among those in the room.

According to Daniel Sellers, executive director of MinnCAN, it’s a “good first crack,” but using the term “intern” teacher to describe alternatively certified teachers (such as those seeking licensure through Teach for America) would single them out as not being qualified.

There’s still time to make changes before the bill is presented for consideration March 17. But knocking out seemingly basic issues doesn’t seem like much of a departure from the Band-Aid approach the state has taken for years. “We have to acknowledge that the Legislature has a responsibility for where we’ve come to this point, with our dysfunctional system,” Sen. Greg Clausen, DFL-Apple Valley, said. “I am a little concerned about looking at licensure bills knowing we have a report in front of us that we really need to delve into.”

Members of the House Education Finance Committee also met yesterday to review the audit. They echoed Clausen’s desire to take things slowly. “My personal feeling is we need to fall into a period of intense listening,” Rep. Jenifer Loon, R-Eden Prairie, said after the hearing. A bipartisan workgroup will likely be tasked with digging deeper into the report this summer, she added.

While lawmakers are under pressure to make some immediate changes, many are voicing reluctance to do much this session — there’s simply not enough time to give the teacher licensure system the thoughtful, comprehensive overhaul that it needs, they say.

Beyond clarifying statute language, they will also be looking at consolidating all teacher licensure duties under one entity and conducting a complete overhaul of the licensure system, perhaps adopting a tiered system. All those recommendations came from the auditors, who say their investigation revealed a need to level the playing field for in-state and out-of-state teacher candidates.

‘No one’s the villain here’

In presenting key recommendations to lawmakers, Judy Randall, with the legislative auditor’s office, identified the Board of Teaching as the agency best-equipped to take over all teacher licensure duties.

The rationale for the recommendation is twofold: It makes sense to have licensee discipline managed by peers in the profession; and the task of approving state teacher preparation programs housed at colleges and universities seems to fall outside the realm of the Minnesota Department of Education’s K-12 jurisdiction.

Not everyone agrees with that recommendation. Referencing the ongoing lawsuit against the Board of Teaching over out-of-state teacher licensing, Sellers testified in favor of consolidating all licensure activities under the Department of Education instead.

He noted that Erin Doan, the executive director of the Board of Teaching, is “capable and competent,” but that the board has proven itself “dysfunctional and not able to manage teacher licensure.”

His skepticism, in part, stems from the fact that the board lacks adequate staffing to fulfill such a huge responsibility. The 11-member, volunteer-based board only meets once a month. 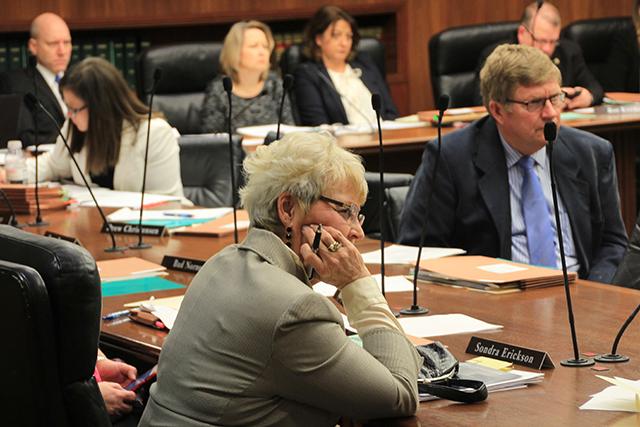 For some lawmakers, like Sen. Terri Bonoff, DFL-Minnetonka, tensions with the board are long-standing. Her distrust of the board can be traced back to its rejection of a Teach for America licensure variance a few years back.

Others, like Rep. Sondra Erickson, R-Princeton, are a bit less inclined to discredit the board’s capabilities. “We really did have a collapse in the area of leadership on the Board of Teaching because we had a lot of interim directors until Karen Balmer took over [in 2007],” she said.

If, in the end, the board’s politically-charged relationship with lawmakers proves too cumbersome, Randall suggests starting with a clean slate.

Rather than rolling all teacher licensure responsibilities into the board (or the MDE), the Legislature could create a new licensing entity altogether.

It’s only mentioned briefly in the report, but during presentations to lawmakers, Randall has proposed creating an Education Licensing Board, which would replace the licensing functions of both the Board of Teaching and the Board of School Administrators.

Lawmakers would need to decide on a new governance structure, along with the membership composition of the board, to be appointed by the governor.

While it’s too early to tell whether or not this alternative route will gain any traction, it’s clear that lawmakers will need to grapple with some under-the-surface tensions in order to make this overhaul of the teacher licensure system truly effective.

“No one’s the villain here,” Randall said between hearings. “There’s been a lot of finger pointing for a lot of years. It’s created a lot of distrust in all directions. I think what would be really great is if we could say ‘Here is where we are. How do we move forward?’”