Heading into last night’s St. Paul school board meeting, protests seemed likely. Some had predicted an emotionally charged crowd divided between those for and against Como Park High School special education teacher Theo Olson, who was recently placed on paid leave after a public uproar over his Facebook and blog posts that many community members and Black Lives Matter activists deemed racist.

The scene that transpired in the first 40 minutes proved a bit more visually jarring.

The public comment section started out with Susan Montgomery, an impassioned mother who listed a number of grievances she has with the adversities her son faces in the district as a student of color. Wrapping up her allotted two minutes at the podium, she addressed all district staff:  “If you do not like our kids, do not teach in our schools,” she said.

Taye Clinton, her son who attends pre-K-8 Linwood Monroe arts school, spoke next, giving examples of how his teachers and one bus driver, in particular, have made him feel unwelcomed in his own school.

A number of other public commenters echoed their sentiment that the district isn’t doing enough to ensure that students of color are being treated fairly, both in terms of disciplinary actions and educational supports.

Things hit a tipping point when Jim Endres, a substitute teacher, moved the focus away from students, asking the board to better support teachers in the classroom, including Olson. He started to elaborate on what he considers to be the impossible standards placed on teachers today because we have “something called political correctness,” when booing audience members began to drown him out.

Within seconds, protesters eager to verbally confront Endres had approached him, including Taye, who was one of the first to spring up from his chair in the front row.

And there you have it: a frustrated young black male student juxtaposed against a frustrated older white male teacher with two vastly different interpretations of the race dynamics at play in the SPPS system. It’s a visual that speaks to the current standoff between those in the freedom-of-speech camp and those who have no more patience for intolerance, whether it’s overt or unconscious in nature. 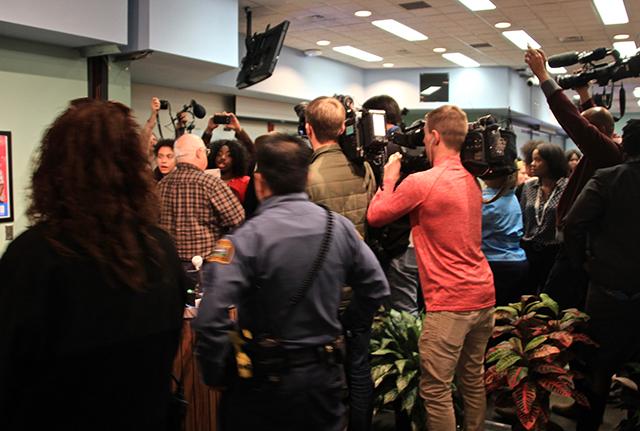 Cameramen flocked to the action; Superintendent Valeria Silva exited the room, and the board called for a 10-minute recess.

It all felt reminiscent of the Minneapolis Public Schools board meeting last January when protesters shut down a board vote on whether to appoint Interim Superintendent Michael Goar as the new superintendent after it had ousted the top candidate that same evening.

While things in Minneapolis have quieted down for the time being, back in the SPPS boardroom the rallying cry for systemic change to address racial disparities — both in discipline and academic outcomes — was very much alive.

After the brief recess, the board segued into a lengthy recognition segment, handing out medals and accolades to students, staff and athletic teams in attendance.

Re-energized by this break in tension, the board members reconvened at their seats to continue with the business of the district.

Before delving into the routine superintendent’s report, Silva took time to address the most pressing concerns over safety and discipline incidents at Como, which had spilled over into the public comment segment that evening.

“There is no denying the past few weeks have been challenging for St. Paul Public Schools. As you are all aware, a few of our schools have dominated recent headlines in ways that are not representative of the great things happening within their walls,” she said. “While the tragic actions of the few do not define the character of the whole, we must not and will not ignore the seriousness of these recent incidents.”

She reviewed some of the strategies that each individual school is being asked to implement to create a positive school environment, including restorative practices. It’s a task, she emphasized, that will require the engagement of everyone — teachers, administration, parents, students and community members — because school climate is affected by the tone set out in the their communities.

“Even with strong systems, we will always be confronted with the unpredictable. We work with children and young adults, many of whom live in a variety of trauma. Unpredictability comes with the territory,” Silva said.

Board member Steve Marchese said he was pleased to hear Silva report that a number of community-engagement sessions to help repair the school climate at Como High have already taken place. From these conversations, the Como school community developed a vision for a new system of student support that will place community support members in the building through the remainder of the year.

In response, board member Jean O’Connell clarified that the backbone of this school-climate work has been in place for some time — that it wasn’t simply reactive.

Roughly four hours into the meeting, the board approved the new contract with the St. Paul Federation of Teachers in a unanimous vote.

Board Chair Jon Schumacher offered a few thoughts on the contract, which he and other stakeholders had fine-tuned in a 24-hour negotiating session.

“A lot of the issues we deal with as a school district — a lot of issues that are in the headlines — to be able to come through all that … and come up with a contract that I think honors teachers, the administrators, but most importantly the students — I think it really gives us a step forward,” he said.

The contract includes pay increases that will cost the district $21 million in salary and benefits over two years, along with a number of specific terms aimed at improving school climate, or safety, adding supports for students and teachers, and strengthening family engagement efforts.

Earlier on, Silva had expressed a similar degree of confidence in the new contract to help improve school climate. She did note, however, that it’s only one piece of the puzzle.

“While a contract alone cannot solve the complexities of school climate, the substantial investments made in our students, staff and families will strengthen our combined efforts,” she said.