College students have a reputation for poverty-driven thrift: bowls of ramen noodles, cheap beer and taking laundry home to mom’s on the weekend.

But a recent survey of college students across the state suggests many in Minnesota could be truly in need.

More than one in seven Minnesota college or university students who responded to the 2015 College Student Health Survey said they ran out of food and didn’t have money for more in the past year, while nearly a quarter said they’d worried that scenario would happen to them.

Is this just the usual college food crunch or a more serious issue?

The new findings in Minnesota come from the College Student Health Survey, which is sent to a random sample of students at campuses across the state. Results of the health survey, completed by more than 12,000 students last year, have helped inform the University of Minnesota’s policies requiring health insurance for students, its ban on smoking and tobacco on some campuses, and has directed more resources toward students’ mental health.

For the first time last year the survey, administered by the University of Minnesota’s Boynton Health Service, included questions about whether or not college students experienced food insecurity, which is defined as the “limited or uncertain availability of nutritionally adequate and safe foods or limited or uncertain ability to acquire acceptable foods in socially acceptable ways,” according to the U.S. Department of Agriculture.

While discussions about food insecurity at college and university campuses across the country are gaining momentum, there’s little academic research to indicate the shape or scope of the problem, said Melissa Laska, an associate professor of epidemiology and community health at the University of Minnesota’s School of Public Health.

“Food insecurity is associated with a bunch of adverse consequences in other populations — poorer academic performance in primary and secondary schools, (and) we’ve seen it associated with some mental health outcomes,” Laska said.

While the Health Survey found food insecurity to be an issue across Minnesota, it varied in degree across the different campuses.

A third of students surveyed at Minneapolis Community and Technical College said they’d been short on food with no money to buy more in the last year. The same was true for nearly a quarter of St. Cloud State University students, one in 10 University of Minnesota-Twin Cities students, and one in 20 Carleton College students.

Food and financial insecurity on Minnesota campuses
Percent of students responding "Often or sometimes true" to the questions "Within the past 12 months the food I bought just didn’t last and I didn’t have money to get more" and "Within the past 12 months I worried whether my food would run out before I got money to buy more."
Source: Boynton Health Service
*"All students" includes data from the colleges listed in the chart as well as St. Catherine University, St. Cloud Technical and Community College, the College of St. Scholastica and Winona State University, which are not listed individually because their survey information wasn’t available online or they did not provide this data to MinnPost. A spokeswoman for Augsburg College, which was included in the survey, said the school did not have the information.

Boynton’s survey didn’t get into why students were dealing with food insecurity, so officials don’t know what’s driving the issue on our state’s campuses: It could be pressure on students’ pocketbooks from the cost of tuition, lack of access to grocery stores, poor money management, or many other reasons.

With the rising costs of tuition and rent, it’s no surprise college students are feeling crunched. Another factor that might make for more students struggling to pay expenses is expanded college access, said Sonal Chauhan, the associate director for membership and outreach at the College and University Food Bank Alliance.

“A lot more students have the opportunity to attend postsecondary education and receive financial aid, however, their basic needs might not be met,” she said.

By analyzing students’ responses to other questions, Boynton researchers were able to put together some characteristics associated with worrying about being able to buy enough food that have them concerned.

Among undergraduates at the University of Minnesota’s Twin Cities, Duluth and Crookston campuses, food insecurity was more prevalent among black, non-white multiracial, transgender/genderqueer and Hmong students than among other groups.

Food insecurity by race
Percent of students of students, by race, who worried food would run out before they had money to buy more often or sometimes in the last year.
Source: Boynton Health Service

Undergraduates reported higher rates of food insecurity than graduate students. Having a loan to help pay for school was associated with food insecurity. So was coming from a low-income family.

The findings are striking enough that more research is warranted, said Katherine Lust, the director of research at Boynton. But she cautioned the university community against making hasty decisions to try to fix the problem without uncovering its roots.

Whatever the reason for food insecurity, colleges across the U.S. have already begun working to address the problem with efforts to bring stores that accept nutritional assistance programs closer to students, and food banks, Chauhan said. 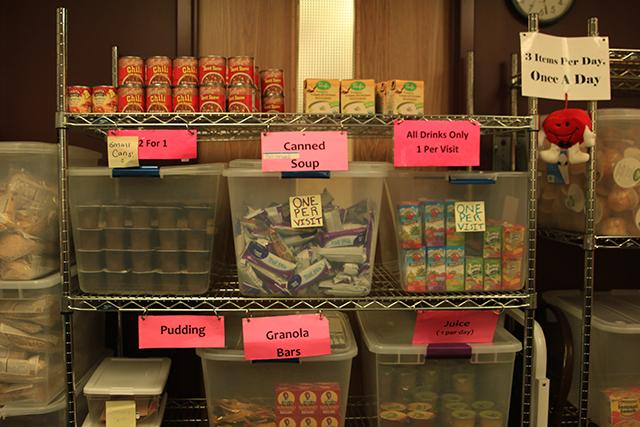 MinnPost photo by Greta Kaul
Normandale Community College's Campus Cupboard opened in 2012. It mostly provides food for students to eat while they are at school.

Yachin Scott, 19, stopped by the Campus Cupboard  at Normandale Community College on Tuesday morning to pick up a granola bar, a juice box and raisins. The first-year student said being able to pick up food free of charge at school helps offset his other expenses.

Normandale opened its Campus Cupboard in 2012, after faculty and staff noticed students were showing up to class hungry. At the time, school conducted a survey and found that about a quarter of Normandale students said they experienced food insecurity.

The average annual net cost of attending Normandale for students who receive federal aid for low-income students is about $14,000 — below the national average of $16,600, according to the U.S. Department of Education. But many students juggle work and supporting a family on top of school, and some Normandale students are homeless.

Normandale’s Campus Cupboard mostly offers food items students can eat during the school day, including soups, granola bars and cereal. After filling out a form that helps staff track how many students make visits, students are allowed to take up to three items per day.

Feedback from students has been positive, Kanwischer said — some students have said it’s helped them stay in school.