Tuesday morning, nearly 600 donors, volunteers and partners gathered at the Metropolitan Ballroom in Golden Valley in support of Project SUCCESS, raising $460,000 in individual donations, future pledges and a matching contribution.

The event opened with a brief number from “And So I Did,” the student-created musical that explores the transition from middle school to high school and the importance of being authentic.

A group of nine students and staff, along with Minneapolis Public Schools’ Deputy Education Officer Elia Bruggeman, took this production to Cuernavaca, Mexico — a Minneapolis sister city — this past February. While there, the students performed for more than 2,000 local students, community members, business professionals and local leaders.

It’s the type of enrichment activity that can catapult a student from being a passive learner to being an engaged learner, able to articulate their goals and eager to share their talents.

But not all missions of self-discovery require a trip abroad.

“We have to do more, and we have to do it now,” she said, noting they have tracked the positive impact of the programming on student outcomes like graduation rates and grade-point average.

Project SUCCESS first connects with students as they enter sixth grade and sticks with them through their senior year. In partnership with a number of Minneapolis Public Schools, facilitators of the program lead monthly goal-setting workshops for students inside their language arts classrooms.

According to an evaluation conducted by researchers at the University of Minnesota, 90 percent of teachers report that Project SUCCESS helps students become more self-aware of their strengths, be better problem solvers and be more motivated to succeed in school and set goals for the future.

Likewise, many report that they appreciate the opportunity to observe their students from a new perspective, as the guest teachers draw out the potential in students who may otherwise appear to be disengaged in class.

Building on these relationships, Project SUCCESS facilitators encourage students to take advantage of the experiential learning opportunities they offer beyond the classroom: student musicals, college tours and overnight trips to the Boundary Waters. 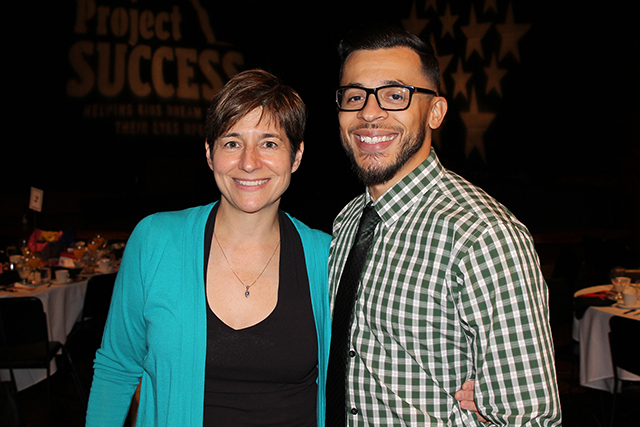 By removing all of the financial barriers to these experiences, project facilitators know that participants will benefit from the so-called soft skills they develop, including persistence, character and grit. Empowered by these newly discovered attributes, students are doing better academically as well.

Upon completing an analysis of Project SUCCESS participant data, Eric Moore, Minneapolis Public Schools’ data guru, has endorsed the program as an effective agent in helping to close the achievement gaps.

Looking at the numbers he pulled together, 67 percent of all students who attend Project SUCCESS college tours are more likely to graduate on time than students who do not participate.

Also, African-American and Latino middle school students who participate in a Project SUCCESS-produced musical each year show a 20 percent average increase in GPA greater than those who do not participate.

In addition to in-class workshops and experiential learning opportunities, Project SUCCESS provides students and their families with tickets and transportation to local theater productions. They acquire complimentary tickets from 35 Twin Cities theater partners and provide the transportation for families interested in attending. Last year, more than 10,000 students and family members took advantage of this opportunity to bond over a creative arts experience.

Marc Bromaghim-Oropeza, a former Project SUCCESS participant through his years at Anwatin Middle School and South High School, now works for the nonprofit as a classroom facilitator. He works with 1,600 students on goal-setting tasks every month.

“As an adult, I’m often reminded just how much is going on in their lives and how we need to meet them where they’re at,” he told those at the breakfast banquet.

As a student, he says he struggled with anxiety and depression, to the point where he had suicidal thoughts. Raised by a single mother after his father died, he was feeling disconnected from school life until he connected with a Project SUCCESS facilitator, Jason Brown, in sixth grade.

Brown encouraged him to audition for a musical, which ended up becoming the first of many for Bromaghim-Oropeza. He also went to a number of theater productions with his mother, he said, passionately rattling them off by name. 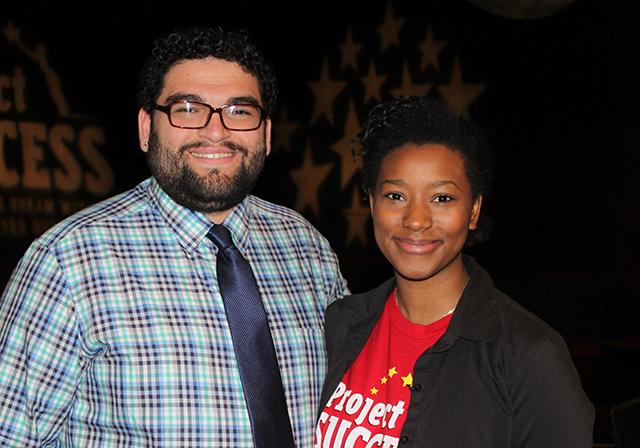 Courtesy of Project SUCCESS
Marc Bromaghim-Oropeza with one of his current students, Fanta Diallo, a senior at South High in Minneapolis.

Things have come full circle for him, he says, announcing he’s now engaged to another Project SUCCESS musical alum who will soon become his wife.

Trading places on stage with another alumus, David Rollen, the two slipped into a sing-off, recalling numbers they performed in past Project SUCCESS musicals — unscripted proof of the lasting impact exposure to the arts can have on youth.

Rollen, a former student at Anwatin Middle School and Patrick Henry High School, now works as a counselor in Arizona and has recently committed himself to pursuing his next big endeavour: opening a group home to serve troubled youth in Arizona.

Looking back, he says, it’s remarkable that he didn’t get caught up in gang activity, or selling drugs.

“Project SUCCESS helped me realize my identity,” he said. “We mustn’t become complacent, to prevent kids from falling through the cracks.”