“Speak your truth, [from] your heart,” she said, addressing the solitary community member in attendance at the get go.

In keeping with the planned focus group format, Guess paired the first participant with a facilitator and a recorder to help guide her through all four discussion questions and record her feedback.

This community member, Rebecca Miller, also happens to be serving on the superintendent selection committee.

She may not have anticipated playing such an active role in the session, but she got the ball rolling before a few more community members walked through the door to join in.

Based on estimates from the optional online pre-registration form, Guess says they had anticipated a dozen community members would show up. But she’s not discouraged.

“There’s a lot of people who were dissatisfied with the last process, felt disengaged,” she said. “I’m hoping to build a community of coalitions and partnerships that the district can utilize.”

Any number of factors could have impacted the turnout: the rainy weather, work conflicts, or simply the intimidation of not knowing what to expect.

Guess, owner of EPU Consultants, has taken all of these potential barriers into consideration, and more.

The lineup of remaining listening sessions, which run through May 5, is spread out geographically and includes weekend sessions held from 10 – 11:30 a.m., for those who can’t make the weeknight sessions from 6 – 7:30 p.m.

In addition to refreshments and childcare, she’s created a team of assistants who are fluent in Spanish, Somali and Hmong who are able to help interpret as well.

The format of each listening session may vary, Guess says, depending on the size of the group. But two things will remain constant: the four questions participants are asked to weigh in on, and the assurance that their input will be passed along.

Asked if she thinks potential candidates may be deterred by such a public selection process, accentuated by a large community engagement component, Guess framed community voice as a win-win.

“You’ll get the best of the best — those who aren’t intimidated,” she said, noting it’s important that candidates have a solid understanding of the community they’re looking to serve. “You want them to have as much information as possible so they are making an informed decision about their future.”

“I think it’s important for a candidate to know the community wants to be involved,” she said. “Understanding that community-stakeholder relationship is going to be a part of the job.”

Despite the low turnout, Ellison says she feels good about the open, responsive community engagement process being facilitated by Guess. And she’s already picking up on a couple of things community members are prioritizing.

“What I’m hearing is that [the next superintendent] must understand Minneapolis politics, the environment,” she said.

Leslie Redmond, a community member who grew up attending public schools in Washington, D.C., suggested a few other qualities the selection committee should look for in the next superintendent. A law student who volunteers time to help teach black history and other topics at Minneapolis schools, Redmond says the ideal candidate will be committed to spending time inside the schools, will think outside the box, will recognize there are deep-rooted issues behind behavior issues, and will understand MPS students.

Andrea Breen, a Washburn High alumna with three students — one a recent MPS graduate and two currently enrolled — and a husband who teaches in the district, added to the list.

She said the next leader should have a proven deep level of cultural competency, be good at building relationships, have some level of experience in education beyond administration, and not be afraid of controversy. 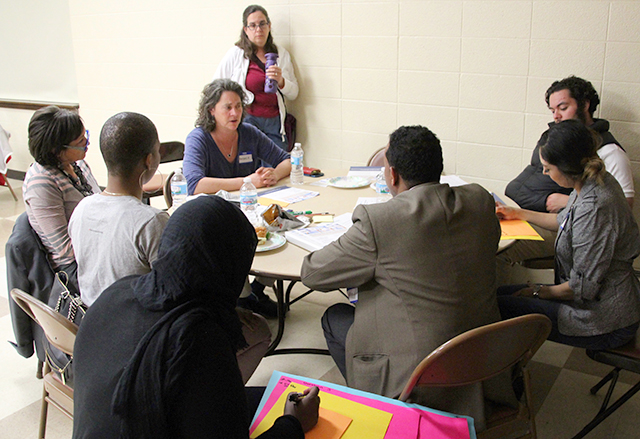 In terms of identifying the greatest challenges facing the district and highlighting priorities for the next superintendent, one word seemed to resonate most with all of those in attendance: equity.

The next community listening session will take place Saturday, April 23 at Windom Northeast Park from 10 -11:30 a.m.

Guess says community members can expect an opportunity to meet the finalists sometime between May 18 and 24, once the listening sessions are done and the selection committee, along with the district’s search firm, DHR International, has reviewed candidates for the position and recommend up to three finalists to the board.

In the meantime, the selection committee will meet for the first time this coming Tuesday, for an orientation session. Since last Tuesday, one alternate community representative, Christine Belfrey Johnson, has joined the committee. A parent liaison at Southwest High School, she has replaced Rhonda Larkin, principal at Stadium View.

Lessons learned: How the new MPS superintendent search plans to include community input