School safety concerns — and the debate over how to best address racial disparities in student discipline  — have garnered a lot of attention in St. Paul over the past few months: not just from the media, but from state legislators, the teachers union, students, and community members alike.

So it came as little surprise when, during a round of contract negotiations in March, the St. Paul Federation of Teachers sought dedicated funding for schools to improve school safety conditions.

A total of 18 schools applied for funding, and up to six sites will be awarded up to $150,000 each to roll out their individualized plans this fall, with nine more the following year and 12 more during the 2018-19 school year. Next week, a committee made up of representatives from the district, the teachers union, parents and students will review all applications and announce the first batch of awardees.

Even in the absence of dedicated funding, though, a number of schools in St. Paul have already found ways to adopt various elements of such practices, providing a window into just how this increasingly common disciplinary strategy actually works in classrooms.

Restorative practices can be traced back to the restorative justice model that originated in the criminal justice system in the 1970s. Rather than simply being punished, offenders were invited to engage in a process of reconciliation with those affected by their actions — a process whose origins goes even farther back: to mediation practices long utilized by Native American cultures to facilitate a communal sense of justice.

Often characterized by a circular seating arrangement, the conversations at the heart of restorative practices offer everyone involved the chance to speak. In some cases, a facilitator may use a talking stick, or some other object, to help designate whose turn it is, and to ensure that there are no interruptions.

While such activities tend to strike outsiders as an odd or impractical way of holding students accountable (at least compared to more traditional disciplinary measures, like suspension), restorative practices are increasingly gaining clout among students, school administrators and teachers. Such programs, in fact, are now seen as an effective way to build, maintain and, when needed, repair relationships that may disrupt classrooms — in ways that are more likely to actually change behavior compared to those which isolate students from their peers.

Those positive results have been the experience at Farnsworth Aerospace’s middle school campus, where the staff began using restorative practices a couple years ago.

At the time, a team of three — a behavior specialist, an intervention specialist and a special education coordinator — introduced restorative practices to the school’s special education students. Once they began seeing positive results with their most at-risk youth, though, they and their colleagues realized everyone else at the school could benefit from it as well.

At Farnsworth, as at other schools, restorative practices can be used to achieve two distinct outcomes: relationship building and relationship repairing. To build relationships, teachers use restorative circles with their entire class: to lay out expectations and to give students an opportunity to get to know one another. 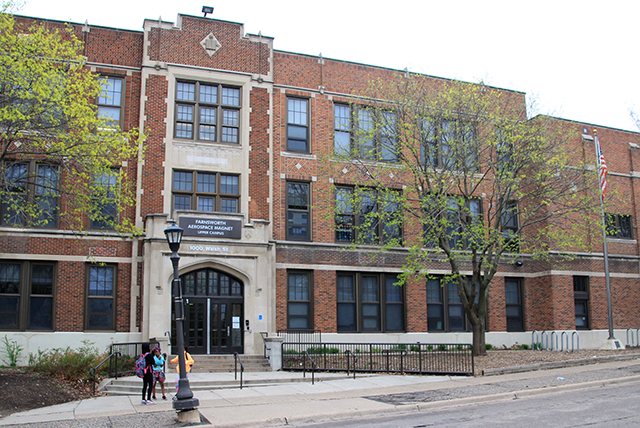 MinnPost photo by Erin Hinrichs
Positive results have been the experience at Farnsworth Aerospace’s middle school campus, where the staff began using restorative practices a couple years ago.

Last month, for example, an intervention specialist at Farnsworth named Shawn Davenport helped facilitate a restorative practices circle with a science teacher and about 30 students. The group sat in a circle and talked about the teacher’s expectations for the class — and for the students’ expectations of one another.

“I think schools, as a whole, got so into testing and making these grades that people forgot one of the reasons we’re here is to build relationships,” Davenport said. “That’s hard to do in 30- or 40-minute lessons.”

When it comes to relationship repairing, support staff helps facilitate restorative circles involving those affected by a behavioral incident. Once everyone has had time to cool off, each individual involved is invited to talk through what happened — what emotions were involved, what the impact was, and what needs to be done to establish trust among the participants.

“The theory behind it is if you care about the people in your community and you’ve done these proactive community building circles, it’s much easier to repair [relationships],” explained Sue Bofferding, Farnsworth’s special education lead.

At the start of this school year, Bofferding said, a fight that involved some male students beating up on some female students had a profound impact on the student body. Rather than defaulting to suspensions and remove the offenders from the school, however, the behavior team facilitated several restorative circles with combinations of witnesses, victims and offenders. “Coming together with the students who did the harm, people were crying,” Bofferding said. “It was a very powerful experience to be a part of. Those who came out of that were some of our greatest advocates.”

The strategy reflects something many educators have expressed in recent years: that the days when a teacher could command respect simply by virtue of being an authority figure are long gone. They need to find a way to prioritize relationship building with their students, so everyone feels personally accountable to one another.

“At this age, they’re so relationship driven,” Bofferding says of the middle school students they serve. “That is the foremost thing in their mind — who is saying what, doing what, and what does that mean for me? It makes sense to use that to our advantage.”

Even so, knowing that some teachers would be disinclined to routinely carve out classroom time to rearrange desks and ask students to share how they’re feeling, Bofferding and her team invested in tracking results early on to prove the effectiveness of restorative circles.

Over the course of just a couple years, she says, they saw office referrals, dismissals and suspension for the special education population dwindled. Attendance rates also improved and class failures were down.

“The way we did it was unique,” Davenport said. “We started with a small population. People started to see change within those students. People started becoming interested and wanted to experience the [restorative practices] circle for themselves. Word just spread and now we’re here.”

How feasible is it?

Few might argue that there’s no value in building and repairing relationships at school. But is the time commitment required to implement restorative practices worth it for teachers, who might see such practices as another substantial addition to their workload?

Done consistently, Davenport says, teachers actually save time in the long haul by spending less time interrupting instructional time to send students out of the classroom.

At Farnsworth, since the restorative circles used to mediate conflicts can be time-intensive, Bofferding and a couple of her student support services colleagues lead these circles outside of the classroom, alleviating the burden from teachers who can’t necessarily afford the time.

Still, Nancy Riestenberg, a school climate specialist with the Minnesota Department of Education, cautions that such practices, and their results, don’t happen quickly when it comes to school-wide implementation. “Generally, if you’re trying to implement anything in a school…it takes between two to four years to get everything in place,” she said.

Nor is it without expense. Riestenberg recommends that, when financially feasible, schools hire a dedicated restorative practices coordinator who can track data and prepare a team of student support staff who are well-equipped to spearhead the initiative school-wide.

If Farnsworth is awarded funding through the district’s new restorative practices pilot program, for example, the school will hire a specialist to take on the bulk of the work so that Bofferding and her colleagues aren’t spread so thin.

Yet regardless of whether district funding comes through for next year, Bofferding says that the school will be moving forward with the expansion of their restorative practices program — through community outreach and on-going professional development for all staff.

“It’s transforming our students in a way that I have never experienced before,” she said.

Could the next essential disciplinary tool in St. Paul schools be a talking stick?