Down to two finalists for the Minneapolis Public Schools superintendent position, the school board conducted interviews Tuesday evening with both Ed Graff, outgoing superintendent of the Anchorage School District, and Brenda Cassellius, the Minnesota commissioner of education.

After nearly 90 minutes of face time with each candidate, the board reconvened to discuss the logistics of conducting site visits before they vote on a finalist next Tuesday. Based on their availability, Board Chair Jenny Arneson and Board Member Rebecca Gagnon will be heading to Anchorage to further vet Graff’s track record, while Board Members Siad Ali and Josh Reimnitz will be doing the same for Cassellius here in Minnesota. They will present their findings to the public at Tuesday’s meeting, prior to discussing and voting on a finalist.

With last-minute round-trip flights to Anchorage hovering around $1,400, plus additional travel expenses, does Graff’s candidacy warrant a site visit? It’s a question the board spent some time deliberating. But, ultimately, members decided there was enough at stake — community trust, an upcoming referendum, chronic achievement gaps — to justify investing a bit more in investigating the out-of-state candidate before choosing the district’s next leader. One question sure to be on their minds is why the board in Anchorage chose not to renew Graff’s contract last fall.

The rebooted search has already racked up a number of unforeseen expenses, including the need to hire a new search firm, DHR International, and a community engagement consultant, Radious Guess.

The initial 10-month search came to a halt in January when the board rescinded its offer to its top candidate, Sergio Paez from Massachusetts, following allegations that staff had abused special-education students at the Peck School in his prior district. Since these allegations had evaded the background check performed by a paid consultant, HYA (Hazard, Young, Attea & Associates), the board voted to suspend contract negotiations while two board members flew out east to visit the Holyoke district to consult with 12 of Paez’s former colleagues.

While the allegations remained just that — allegations — Paez’s public image had already been tarnished and the board chose to move forward without him.

The board nearly appointed the runner-up, Interim Superintendent Michael Goar, but that attempt was thwarted at the Jan. 12 board meeting when protesters demanded a new search.

In the interest of rebuilding community trust and being more transparent, the board approved a modified search process on an expedited timeline. This included holding a handful of community listening sessions and forming a volunteer superintendent search committee — made up of three board members, two students and five community members — to select and interview five semi-finalists from a slate of seven candidates approved by DHR. This group selected the two finalists on Friday.

In addition to recruiting candidates, combing through an initial batch of applicants, and conducting lengthy reference checks, DHR outsourced two rounds of background checks. One entailed the basics: verification of employment and educational background, along with a criminal record check. The other, called a “social media check,” went a layer deeper, digging up any number of insights from candidates’ Facebook and Twitter accounts, as well any other information that lives online, like court records.

The service doesn’t come cheap, Natalie Brooks, DHR representative, told the board. But the firm felt it was a necessary layer of precaution.

“We get very in-depth records. It’s expensive to do these social media checks,” she said. “But when it’s something at this level, with kids and schools, we want every level of detail we can.”

She then assured the board there were no surprises that might derail the search at this point. 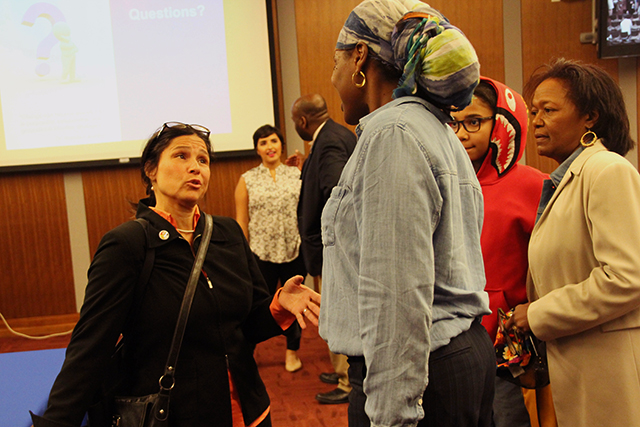 MinnPost photo by Erin Hinrichs
Finalist Brenda Cassellius speaking with Board Member Tracine Asberry and members of the community.

For some, a renewed confidence in the outsourced background check process may have been enough. For instance, Board Member Carla Bates suggested they only do a site visit for Graff since he’s not a known entity. And the visit, she proposed, could come after the vote — if they decided to hire him, that is.

After some deliberation, the board decided to stick with its original plan to conduct site visits for both finalists prior to making its final selection.

“I do believe that we should go in person, and there’s a certain kind of political aspect to all of this,” Board Member Don Samuels said. “People are very sensitive to the failures of the last go around and we want to honor that. It may not be something we do in the future, but I think it’s something we have to do this time.”

Despite all of the vision statements and examples of past success that both finalists presented to the board Tuesday evening, one fairly significant question still hasn’t been thoroughly addressed: Why did the Anchorage district decide not to renew Graff’s superintendent contract this past fall?

After having served the district in various capacities for 25 years, the last three of which were as superintendent, Graff — who was loved by many in the district — lost the backing of the board. According to local media reports, the board has kept mum on its reasons for choosing to move in a different direction. Graff has remained equally evasive.

When pressed for more detail Tuesday evening, Graff stuck to his standard reply.

“That’s the board’s decision. Through a lot of discussion and conversations, board members decided they wanted to [go in a] different direction,” he said. “From my lens, I came in at a time that was very similar to the transitions that were happening here and I was able to provide a great deal of stability.”

He then cited a list of accomplishments that took place under his leadership, including increased graduation rates, increased attendance rates, and improved teacher morale.

Yet Graff’s current employers chose to hire a new superintendent to help the district achieve its “very aggressive goals,” outlined in its Destination 2020 strategic plan.

The disconnect leaves room for speculation — the very thing, it would seem, this search process has been geared toward eliminating.