Last Friday, about 20 Minneapolis teachers and administrative staff members lined up inside the media center at Franklin Middle School to present their concepts designed to enhance learning in their classrooms.

In a friendly competition modeled after the venture start-up reality show “Shark Tank,” each presenter had about a minute to blaze through their idea and request for funding. The pitches ranged from a stop-motion video project at Bethune Community School to a pizza garden at Anthony Middle School to a couple different “makerspaces,” where students are encouraged to tinker with everyday objects to exercise their creativity.

While only three winners walked away with up to $1,500 in seed money, the event signified the start of something much more far-reaching taking root in the district: a recognition of the grassroots innovations in need of support.

The school board has already demonstrated its commitment to embracing innovation through its community partnership school initiative. The pilot sites are granted freedom to modify their schedules, curriculum and more in order to improve academic outcomes.

This year, in a related initiative that’s a bit less formalized at this point, district staff have been gauging interest in creating more structured opportunities for all interested teachers to pursue classroom innovations.

“This is the culminating event,” Lanise Block, the district’s point person for educator-driven innovation said at the end of the contest last Friday. “We wanted it to be known that there are pockets of innovation in our district.”

In an effort to encourage creativity and collaboration, the district hired Block last summer to work as a strategic projects administrator, a position that’s charged with leading initiatives that advance the district’s strategic vision and reports directly to the office of the superintendent.

One of her main assignments, from the get-go, was to create an innovation lab to support teachers who are willing to experiment with new technologies and ideas to tackle the opportunity gap. This administrative support system was eventually named the Innovation Incubator.

“We started to talk about what some of the barriers are,” Block said. “People may be innovating, but they don’t have an opportunity to express it, be celebrated. It’s a risk, sometimes. So we decided to build a space that’s not physical, but more philosophical.”

In collaboration with the district’s STEM Team, Office of New Schools, special education staff and a few other groups, Block launched a handful of design thinking sessions for teachers, students, administrative staff and support staff to attend throughout the school year.

Her biggest take-away from these initial sessions, Block says, is that everyone was hungry for more. So she decided to hold a summit to set the stage for growing this work next year. At the event, people showcased their ideas, attended breakout sessions and then had the opportunity to submit an idea in the competition to compete for funding.

Next year, with the support of the new superintendent, she hopes to expand upon this initiative by offering teachers more design and prototype support and bringing in more outside partners.

As the demand for these resources grows, Block says Minneapolis could establish its own version of the imaginarium, the innovation lab run by Denver Public Schools.

Denver as a model

The imaginarium in Denver serves as a national model for how a public school district can successfully support grass-roots innovation. When people bring forth an idea, they are supported throughout the process, which involves workshops, research, prototyping, developing metrics to track results, and scaling up. Teachers representing more than 90 schools have utilized this resource; and its design challenge awards teachers much larger grants, in the range of $10,000.

Makisha Boothe, one of the founders of the imaginarium in Denver, delivered a keynote address at the summit in Minneapolis last Friday. During a breakout session later that afternoon, she told teachers innovation will always be met with some level of resistance. The key to advancing this work lies in securing the support of district leadership.

“I think we’re ahead of many districts, but we still have a lot of work to do. If you can build a powerful and effective grass-roots movement, that can influence the top more than people realize,” Boothe said. “We produced smaller winds with some of our smaller pilots.”

To encourage risk-taking, they established a summer lab, so teachers could test out their ideas without having to worry about accountability measures upfront.

Reflecting on the ideas Minneapolis teachers presented at the summit, Boothe said she saw lots of potential for an innovation lab to help usher teachers along in the design process.

During the contest, a number of people asked for funding to purchase existing pieces of technology or fund one-time experiences for a limited number of students. While these proposals may include some creative elements, Boothe says she’d like to see them stretched a bit further to truly become innovative ideas and experiences. 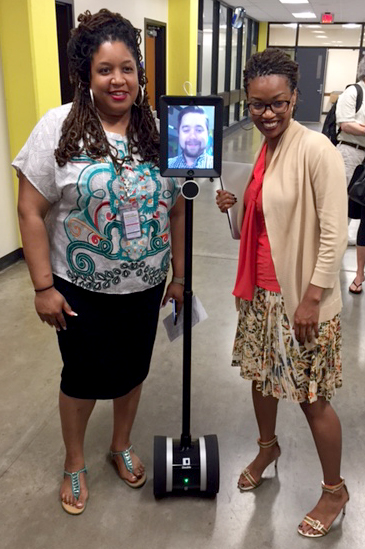 “It’s normal for this to be the starting design challenge. Teachers aren’t typically given the opportunity to design and innovate like this. They were bold in coming forth. That takes courage,” she said, adding the next phase should involve matching these teachers with a research and innovation team to refine their concepts.

That’s exactly what Block intends to do, moving forward.

“We’re all on a spectrum,” she said. “We have to differentiate our support for teachers. We want to support them in reimagining their classroom.”

Special-education staff are particularly well-positioned to benefit from a more structured support system. David Gorke, a technology applications instructor at MPS who works closely with special-education staff, says there’s a tradition of innovation in this teacher subgroup because they’re constantly adapting content and resources to meet the unique needs of their students.

He showcased one of their latest innovation projects at the summit: a Double Robotics telepresence robot composed of a segway-like frame on wheels, an iPad face and a computer-based operating system. The idea came from a teacher, he said, who saw an opportunity to use technology to help a homebound middle-school student transition back to school next year.

Having spent the past four years studying in the hospital and at home, as she learned to manage her muscular dystrophy symptoms, this student will be spending part of the day at school and the other part operating the robot from home, as she builds up stamina and becomes more comfortable interacting with her peers in-person.

“I think we have a lot of pockets of innovation,” Gorke said. “They’re out there, it’s just a matter of getting people recognized for them and then expanding upon what they’re doing.”