Not everyone is naturally inclined to hold a conversation with a toddler or make a bedtime story interactive with questions. But these are the sorts of things that can drastically increase a child’s vocabulary, putting them at an academic advantage once they enter kindergarten.

Research shows that the “word gap” — the 30 million word-exposure gulf that exists between children born into low-income families and their more affluent peers by the age of 3 — is often a precursor to the achievement gap that becomes more entrenched as they progress through the school system.

In an effort to be more intentional about building vocab-rich interactions into their parenting routines, a handful of Spanish-speaking families are currently participating in a new early childhood education class at Northstar Mona Moede Early Childhood Center in North Minneapolis.

They’ve all agreed to start singing, reading and conversing more with their little ones. They’ve been equipped with a textbook, an instructor and a little piece of technology that yields some of the greatest “ah-ha” moments: a recording device their baby or toddler wears in a vest once a week for a 16-hour period.

Once parents have recorded a full day’s worth of their child’s speech patterns, along with the conversation and ambient noise they’re exposed to, a coach is able to analyze the results with them and offer advice on simple ways they can enhance their child’s language acquisition.

Overseeing the class at Mona Moede, the center’s director, Elizabeth Fields, says families have been receptive because it’s framed as a resource rather than an assault on anyone’s parenting style.

“The thing about the word gap and this program is we aren’t asking parents to change the words they’re using with their children. We’re not asking them to change the language culture in their home,” she said. “The goal of this work is to increase the language use in the home and increase the conversational turns taking place between parent and child, no matter what language and culture they’re living within.”

‘It doesn’t take much’

Luis and Andrea Chiqui are enrolled in the program at Mona Moede, a Minneapolis Public Schools site, with their son Alen. At 2 years and 6 months, Alen is already talking but his parents wanted to make sure they were making the most of their interactions with him at home.

Just a few weeks into the 8-week course, they’ve completed two recording sessions and have already begun adjusting their daily routines to promote more quality conversations with Alen. That includes coming down to Alen’s level, to talk face-to-face, really listening to what Alen is trying to communicate without interrupting, and giving him choices throughout the day — even when it’s as simple as what snack he wants to eat — so he gains confidence in his communication skills.

“He feels pride, like he’s important. That’s really good because it gives him security,” Luis said. “These are things every parent should be doing but you don’t know.” 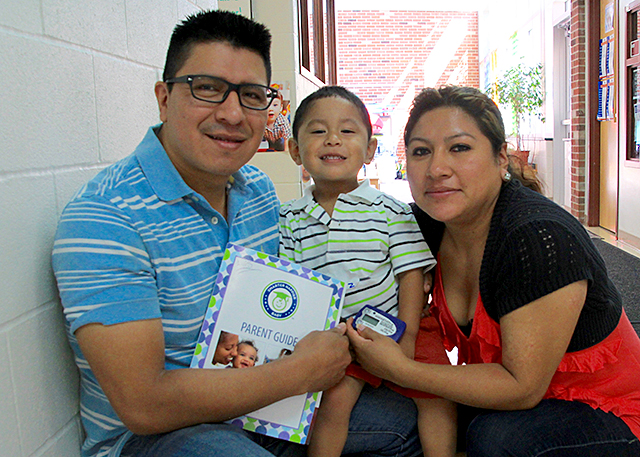 MinnPost photo by Erin Hinrichs
Luis and Andrea Chiqui with their son, Alen.

They’d already raised two other children, but bedtime stories and songs and these intentional conversational tactics they’ve been using with Alen were largely absent. That’s because they’d simply never been made aware of the benefits of talking more with their toddler until now, Luis says.

Growing up, bedtime stories didn’t happen because their parents were too busy working to support their families. But all it took was some self-evaluation and coaching to convince them both that it’s well worth their time to help Alen expand his vocabulary.

“It doesn’t take much, only 10 minutes. It’s not a big change,” Luis says of adding a bedtime song or story to each day.

While the recorder doesn’t track what words Alen is saying or hearing, it does capture a lot of valuable information, including the number of conversational turns or exchanges between child and adult, time spent listening to a television or other ambient noise versus communicating, and the frequency of the child’s communication attempts.

Based on the findings of each report, parents and coaches are able to pinpoint times of the day where lots of talking is taking place and develop strategies to replicate more of these moments, whether it’s taking advantage of downtime in the car during a morning commute or trading out some evening TV time for playtime.

One of the biggest hurdles for some, Fields says, is letting go of their inhibition.

“We tell parents to talk a lot with their infants, but it doesn’t come naturally to everybody and sometimes it feels strange because your infant isn’t talking back to you. So one of the strategies is to actually give video examples of parents talking with their infants,” she said. “They’re not talking back, [but we point out] how they’re using body language to show they’re listening and communicating back with you without oral language yet.” 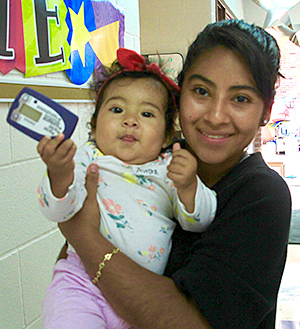 “We talk more. We hold conversations. Even though she can’t talk, she understands what we’re talking about,” Barrientos said, crediting the class with having changed her outlook on the value of conversing with not only her baby, but her 3-year-old daughter as well. “The more we talk, the more they learn.”

The recording device, along with the course materials, are part of the LENA Start™ program, an early language technology package overseen by the LENA Research Foundation that got its start on the East Coast and has recently come to Minnesota.

The recorders and curriculum materials are housed at the University of Minnesota, where researchers are collaborating with a wide range of early childhood educators to start reaching families who stand to benefit the most from early intervention.

Locally, the program piloted in Wayzata, where seven families completed the 8-week course last spring. The program has also been tested with some families affiliated with the Northside Achievement Zone.

This summer, the Minneapolis school district is holding the session for Spanish-speaking families at Mona Moede as a free offering through the district’s Early Childhood Family Education programming. The early education nonprofit Think Small is working on connecting child-care providers with the material as well.

Scott McConnell, a University of Minnesota professor specializing in early education and development who’s working closely with the LENA program, says the parent reactions so far are encouraging.

“It’s real common to hear families say, ‘I had no idea I was a teacher,’ ” he said. “Our experience with LENA so far is that parents are overwhelmed, in a positive way, by seeing their own data.”

Plenty of federal early education policies, along with Gov. Mark Dayton’s universal pre-K initiative, are focused on targeting children starting at age 4. But many say interventions need to start much earlier.

To this end, Minneapolis Mayor Betsy Hodges established the Cradle to K initiative in 2014 to eliminate barriers that hinder children’s development during the first three years of life. The LENA program may prove to be one more tool that local policy makers, researchers and educators deem valuable enough to continue investing in.

“We’re supporting training coordinators, bringing in [the LENA] technology … with a goal of scaling it up in Minnesota so at some point it’s just not here, but other places too,” McConnell said of the LENA recorders and curriculum now housed on campus. “The idea is to use this as the initial support for making a broader-scale initiative.”

Boosting early language learning, one recording session at a time