During his junior year at Edison High School in northeast Minneapolis, Travis Moore found himself at a crossroads. Spread too thin — with competing responsibilities as a father, an employee, a basketball teammate, and a student — he began failing some of his core classes. And he didn’t feel comfortable asking his teachers for help.

“It’s not like I’m happy that I’m failing the class, but I don’t want to feel dumb that we’re a week into this work and I’m still on packet one, and we’re on packet two, and I don’t know how to start it,” he explained. “If we was cool, I could be like, ‘Teacher, help me with this.’ But if a teacher don’t got no relationship with you and you just sit there in their class, you don’t ask nothing, [they’ll say], ‘It’s your fault that you didn’t work or ask questions. You deserve that grade.’ That’s cause we don’t have a relationship that they can say stuff like that.”

The only way to remedy the situation, he realized, was to take it upon himself to start building positive relationships with his teachers so they would better understand where he was coming from. He didn’t expect anyone to lower their expectations, he said. But if he opened up a bit, he figured, they would, in turn, “show a little bit more love.”

Fortunately, Moore, 18, has a dedicated support system in place that he could fall back on for guidance. Enrolled in the district’s Office of Black Male Student Achievement’s new B.L.A.C.K. elective course — Building Lives Acquiring Cultural Knowledge — he was able to debrief in a classroom of all black males, including the instructor, who could better relate to his experiences. Together, they strategized ways to build positive relationships with their teachers, the vast majority of whom are white.

“The B.L.A.C.K. class definitely changed my perspective in high school,” Moore said, adding that it’s helped him take both his coursework and his relationships with teachers more seriously.

An evaluation of the new elective course shows Moore isn’t the only one benefiting from having a class dedicated to serving black male students. This past school year, 175 black male middle- and high-school students participated in the elective course. Notably, 64 percent of participants increased their GPA, with the average GPA rising from 2.06 to 2.15 from the end of quarter 1 to the end of quarter 3 this school year. In contrast, the average GPA for all African-American male students that speak English at home fell during that same period from 2.02 to 1.93.

It may be a small sample size, but the initial signs of impact have the district’s data expert, Eric Moore, excited about the potential this course has to help narrow the achievement gap. “When I look at the data, what I see is the students are really becoming re-engaged in the learning process,” he said. “Grades are synonymous with effort.”

Michael Walker, formerly an assistant principal at Roosevelt High School, has been the driving force behind the district’s Office of Black Male Student Achievement, which officially opened in the fall of 2014. District leadership had modeled the office after a similar initiative in Oakland, California, and appointed Walker to serve as the director.

The decision to invest in an office dedicated solely to black male students can be traced back to a number of factors. First, the push links back to a White House initiative called My Brother’s Keeper, which helped shine a light on the opportunity gap faced by male students of color.

Perhaps more compelling, student performance measures have long shown that the district is failing its African-American boys — its single largest demographic group — at the highest rate.

To be more specific, it’s black males whose home language is English who are measuring the lowest across the board. District data show that in comparison to their East-African peers, who speak another language at home, they are less likely to graduate, have lower attendance rates, are more likely to be suspended, and are less proficient in reading and math. 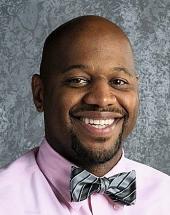 Given these indicators, the Office of Black Male Student Achievement welcomes all black males, though it was designed explicitly for those whose ancestry can be traced back to slavery. Walker makes sure that these boys understand that their cultural foundation extends well beyond slavery — to the great mathematicians who built the pyramids in Egypt.

“What we’re doing is providing these young men with some self-worth,” Walker said, adding that this piece needs to be in place in order for students to stay engaged in the classroom. “When you start to build that self-identity, that self-worth, the academics will take care of itself.”

The overarching mission of the office is twofold: to empower black male students to take ownership of their learning and to help teachers recognize their own shortfalls when it comes to serving students who don’t look like them.

In order to advance this work, Walker enlisted the help of a handful of students and staff to help design the B.L.A.C.K. class. With an office budget of $1.2 million, they piloted the elective course this past fall at three high schools (Edison, North and South), three middle schools (Field, Follwell and Franklin), and one alternative school (Harrison).

At each host site, teachers and staff participated in five professional development workshops where they did things like discuss the importance of using culturally relevant materials in the classroom and confront their own unconscious biases.

“When we created the class, one thing we wanted to make sure of is we don’t want to fix black boys,” Walker said. “Everybody has some ownership in this.”

The curriculum for the B.L.A.C.K. class is rooted in a basic principle: Student engagement is a critical component of academic performance. Rarely, however, do instructors make a concerted effort to connect classroom material back to the black male experience.

In an effort to re-engage these students, by making all things relevant, B.L.A.C.K. instructors take time to dissect issues like systemic racism, slavery, black masculinity, and incarceration through class discussion and service-learning projects.

When Roy Holliday, 16, first heard about the class, he rejected the notion that he could benefit from learning about his own culture. But his curiosity got the best of him and he ended up enrolling in the elective his sophomore year at South High School. He says the thing he liked most about it was that his instructor would share “the untold truth” about things like rebellions during slavery that he’d never heard about in his regular history class. When he first learned about it, he looked it up online at home, to verify, and talked about it with his mom.

Holliday largely attributes his renewed relationship with school to the lessons he learned in the B.L.A.C.K class. Offering an example of his turnaround, he says his ninth-grade report card showed he had been sent home 16 times. The following year, he only got one referral for behavior.

As echoed by his peers, the vast majority of B.L.A.C.K. students eventually buy into the notion of self-discipline. They exhibit their pride in the class by  calling each other kings, speaking in code to one another in the hallways, and wearing T-shirts that advertise the class.

“You need to represent the class,” Earnest Funches, 17, explained. “I’m a part of [the Office of] Black Male Student Achievement, so why would you be doing negative things?”

Highlighting one of the most influential components of the class, Funches, now a senior at Edison, says the group’s tour of historically black colleges during spring break expanded his outlook on the future. Not only had he never been outside of Minneapolis, he said, but he’d never before seen so many successful people who looked like him or been told a college experience like this was attainable.

Giving these students the opportunity to connect with professionals of the same race, Walker says, is critical. He intentionally hires licensed black males to teach the B.L.A.C.K. class so that students, as well as other educators in the building, start seeing black men as educated professionals.

Given the fact that many black male students in the district have only ever encountered black male adults as gym teachers and behavior deans, they take special note of B.L.A.C.K. instructors like Corey Yeager, a family therapist who became a licensed teacher to lead the class.

“They get looked at the same way you get looked at, even as a teacher, a successful teacher,” Funches said, noting black male teachers can better relate to his experiences at school. “Seeing other successful black males makes me think, ‘OK, I can be successful too.’ We not all gang banngers. We not just all out on the streets and stuff like that. If you see a positive black man, you think ‘I can do it too.’ You want to be better. And when they tell you, ‘You can really do this work. Let me help you with your work,’ you want to do it.”

Through professional development trainings, Walker hopes to help bridge the racial disconnect that hinders so many student-teacher relationships.

Upon evaluating the impact of the B.L.A.C.K. class, Eric Moore says authentic relationships are key, when it comes to engaging students in the classroom. As stated by one participant during a focus group interview this past spring, empty words of encouragement fall flat.

“They would tell me that I’m a smart kid. And I never understood it because I’m like, ‘You know, I’m barely passing your class, so I’m not really that smart,’ ” the student said. “But then when [Corey] and all them came [and told me] how I’m really smart … actually sat down and told me how I’m smart, it made me kind of really realize, ‘damn, actually I’m smart.’ ”

Next year, Walker plans to double the course offerings by having his two instructors provide two B.L.A.C.K. courses at many of the existing school sites. He’s also looking to hire a life coach to start offering more structured professional development to elementary teachers and staff. Eventually the goal is to start using B.L.A.C.K. alumni as mentors for their younger peers.

In order to continue refining the curriculum, he’s enlisted the help of a handful of paid summer interns — all advocates of the program — to help conduct community listening sessions and collect teacher feedback.

Based on an initial teacher survey conducted this spring, 82 percent of the 199 respondents said they have identified strategies to better serve black male students in the classroom. Perhaps more notably, by the end of the school year, 91 percent said they could use asset-versus-deficit-model language and thinking about black male students. That number increased from just 68 percent at the start of the school year.

In the survey, one teacher wrote, “The pedagogy of confidence really changed the way that I think about teaching black male students. I have been more conscious of remembering to have high expectations for my black male students every day, and to put our pasts behind us by continuing to try to build relationships.”

While much of the program’s success remains grounded in anecdotal evidence and relatively small gains in GPA averages at this point, Moore expects to see the program help lower suspension rates and improve standardized math and reading scores over the course of the next few years. For now, he’s in favor of keeping the pilot course small and controlled to ensure its impact can be measured.

Telling people to be patient won’t necessarily be an easy thing to do. Walker has already been receiving plenty of requests to help replicate the course at other district schools, for other student demographics — including black females — and even in other states.

“You have to have the discipline to do that because there’s such a high need,” Moore said.