Bob Walser’s induction into Minneapolis school board politics has been pleasant, so far. A newbie to the campaign trail, he secured the endorsement of the DFL Party and the Minneapolis Federation of Teachers last spring and has been encouraged by the well-wishes he’s received from constituents in District 4.

“When the community comes together, it’s really, really heartwarming. That’s been the joy of it,” he said, noting people were very positive and supportive of his candidacy at a recent fall festival event. “People are grateful. That’s really affirming.”

When it comes to good-old-fashioned door knocking, phone banking and campaigning at community events, the race in District 4 — which includes downtown, the Isles neighborhoods and Bryn Mawr — has remained fairly positive. That hasn’t always been the case. In recent years, Minneapolis Public School board races have been marred by controversial campaign finances and attack ads.

Walser says the campaign literature he received in his mail slot two years ago criticizing board member Rebecca Gagnon, along with all of the reports of campaign financing that had flooded the race, really grabbed his attention and inspired him to consider running.

“I felt, ‘Wow, they’re spending a lot of money and stretching the truth,’ to put it kindly. Alarm bells went off for me,” he said.

Josh Reimnitz, Walser’s opponent, agrees that things have remained civil, at least in terms of candidate relations and community interactions. The DFL Party’s convention, however, was anything but. Reimnitz, the reform-minded incumbent, literally got booed and hissed at while he was on stage addressing the crowd.

He suspects his ties to Teach for America and the charter school sector ignited the negative reaction. But he isn't putting much stock in the endorsement process.

“I believe that my base of support is wider — it includes more people and is a lot more inclusive,” he said. “At the DFL convention, I was troubled that the 30, 35 people standing up with Bob were all white. It’s indicative of who’s going to be represented. I believe our system is already set up to represent those people.”

The Minneapolis Public School district serves more than 35,000 students. According to the state Department of Education’s 2016 enrollment data, 66 percent are students of color, 63 percent receive free and reduced-price lunch, 17 percent are enrolled in special-education services, and 25 percent are English Language Learners. Outcomes for these student subgroups, in comparison the white student population as a whole, are poorer when it comes to graduation rates, proficiency in math and reading, and more.

Endorsements aside, the contest has boiled down to one basic question: Who is better equipped to make tough decisions for all students? For Walser, 62, and Reimnitz, 30, this entails confronting their own white, male privilege — a challenge both welcome, if in very different ways.

Walser was born in Minneapolis, but grew up in Edina and moved out east for about 12 years to attend Hampshire College and work for a bit. He moved back to Minneapolis in 1985 and has been living in the East Isles neighborhood ever since. His wife, Julie Young, teaches first grade at Kenwood Elementary. Their twin boys both attended Kenwood, then Anthony Middle School and are now seniors at Southwest High School and the Perpich Center for Arts Education.

He’s long been a familiar face at community events, though he credits another group he identifies with for stretching him beyond his comfort zone. “I’m also part of a community — and have been for many many, many years — which we call the music and dance community,” he said. “That community is diverse in its own way. Within that community there are a lot of people who are really concerned about [equity] issues.”

In his experience, music is a medium that can be used to see things from a different perspective. In fact, he studied cross-cultural music education for his doctoral research, which he completed in 2001. He lived in London with his family and conducted fieldwork in Uganda.

“I’m keenly aware of the limits of my own vision,” he said. “As a student of music, I've had to really stretch my brain. How do I move out of my comfortable, cultural language and begin to perceive something from somebody else’s perspective?”

He’s made a multipronged career out of his passion for music education. Currently, he’s teaching in schools as an artist in residence (he did a barn dancing residency at Kenwood Elementary) and is completing a music research project.

While he’s served on boards for two nonprofits — the Cedar Cultural Center and the Tapestry Folkdance Center — he said running for the school board still feels a bit surreal. But he’s drawn to the challenge becuase he's a big-picture thinker with a natural curiosity for education policy and research.

“I like really big problems. They intrigue me. The problems we’re facing in Minneapolis are being faced by districts across the country,” he said. “How can we re-imagine what we’re doing in a way that will work better?”

Eager to address issues of equity and help improve outcomes for all students, he started paying close attention to board meetings in February. And he’s begun doing his own homework, reaching out to experts in the education sector like the Council of the Great City Schools and Jeff Duncan-Andrade for insight.

When it comes to tackling issues of inequity, he’s a big proponent of looking for holistic solutions that extend beyond the school walls. This work involves communicating with groups like Black Lives Matter and Neighborhoods Organizing for Change, he said, and collaborating with community partners better positioned to support families in need of housing, food and employment opportunities.

He considers the DFL Party’s endorsement a huge asset in terms of being able to facilitate and strengthen these partnerships. The party has been a good resource as he learns the ins and outs of running a campaign. “The coordinated campaign is how I cooperate with the party,” he said. “That’s great. It’s great to be part of a team.”

If elected, however, he said he feels no obligation to champion the agenda of any group that endorsed him. Rather, he’s inclined to do his homework on the issues at hand and listen to what others have to say before making any assertions. “I’m a listener. I’m way more comfortable listening than talking,” he said. “I like to understand where people are coming from and work from that to build consensus. That’s the nature of board work. You can’t make any assumptions.”

Even though he’s been living in District 4 for over 30 years, and has long studied music as a rich source of cross-cultural expression, he recognizes that he still has much to learn when it comes to addressing racism and other barriers that hamper student growth.

Putting on his scholar hat, he’s been reading a book titled “A Good Time for the Truth,” that’s already radically changed his understanding of racism in Minnesota by highlighting personal stories, rather than just stats. A friend gave it to him as a campaign gift.

Reimnitz grew up in Bismarck, North Dakota and studied communications at North Dakota State University in Fargo, where he founded his campus’ chapter of a youth nonprofit called Students Today Leaders Forever (STLF). In 2003, the nonprofit took root in Minnesota and Reimnitz eventually came on board as co-executive director. His six-year term recently came to an end, so he’s currently searching for a new position in the nonprofit education sector.

In the midst of wrapping up work with STLF and serving on the school board, he got married to Daniela Vasan about a year ago. He met his wife when they were both participating in the Teach for America program. From 2008 to 2010, Reimnitz taught fourth-grade science and reading in the Atlanta Public Schools district, where over 95 percent of his students were impoverished and performing below grade level. He students made significant gains both years, he said.

Many of the insights he gained as a teacher have shaped his understanding of poverty, prejudice, and how education systems are, in many ways, set up to favor those who look like him. But his effort to become more attuned to the barriers that exist for students of color is ongoing.

He says he has his wife to thank for keeping him on his toes. “My partner, who happens to be a person of color, educates me fairly regularly about my privilege,” he said, noting they’ll often debrief on his body language and comments after board meetings.

"For instance, she reminds me that something as minor as sitting in a way that takes up a lot of space is totally a male thing," he said, laughing.

Tall and lanky, it’d be hard for Reimnitz not to take up much space. But the reminder to make room for others may manifest itself in other ways. “I believe I have good relationships with every board member,” he said. “Any disagreements we have remain professional.” 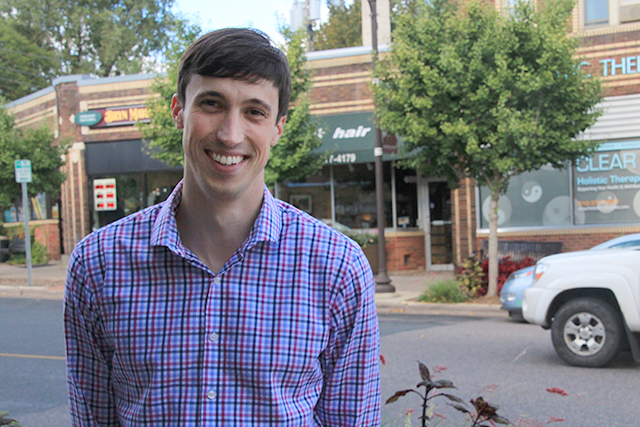 MinnPost photo by Erin Hinrichs
Josh Reimnitz: “At the DFL convention, I was troubled that the 30, 35 people standing up with Bob [Walser] were all white. It’s indicative of who’s going to be represented.”

In an effort to enhance board accountability, he’s taken the lead on rewriting the board’s policy manual, along with the help of those serving on the policy committee. A draft will be presented to the board for review this November. If approved, it will be the most comprehensive change in policy since the board bought a policy manual in 1967, he said.

“What I think good governance can accomplish is proactive actions,” he said. “And I think we’ve been pretty reactive, thus far. When it’s set up in the way that I’m proposing, it allows the board members to do their job of setting a vision, making sure we’re aligned with community values. ... It allows the superintendent to be our expert and execute without as much board interference, but with more regular and predictable board oversight. And it focuses on student outcomes.”

If elected to serve for another four-year term, he’ll throw his support behind the district’s new superintendent, Ed Graff, he said, noting some bold changes are still needed to address the achievement gap. Reimnitz’s other priorities include: a continued focus on equity, raising academic rigor, supporting a comprehensive curriculum, and targeting school resources in a more equitable way.

He ran to address many of these issues four years ago and is hoping another tour will grant him time to put more of what he’s learned into action. This year he sought, but did not get, the DFL Party endorsement. The same thing happened when he first ran in 2012, when he weathered a fairly heated campaign in which his opponents raised issues with his prior ties to Teach for America and the some $45,000 spent in support of his candidacy.

In response to both, he says his Teach for America background does not mean he’s anti-union; and he attributes out-of-state funding he’s received to friends he made while living in South Dakota and Georgia, along with others who believe in his leadership abilities.

“Because I was a newcomer on the school board scene, there were a lot of questions about who I actually was,” Reimnitz said, adding this things have been much quieter on the campaign trail this year. “Because my leadership style has been more independent and pragmatic, it doesn’t lead to as much firing up. It feels just very work oriented. I think it’s a bit calmer.”