In recent years, the Minneapolis school board election has become characterized as a highly contested race inundated with influential endorsements and campaign financing — a figure that topped $500,000 in 2014.

Technically speaking, school board races are a nonpartisan affair. Come Election Day, however, voters who have been even slightly tuned in won’t need a reminder on their ballot to know which candidates have secured the DFL Party’s stamp of approval.

In District 6, that person is Ira Jourdain. He’s hoping the endorsement works in his favor this time around, after unsuccessfully running without it for a citywide seat two years ago. Now backed by both the DFL Party and the Minneapolis Federation of Teachers, he’s running against incumbent Board Member Tracine Asberry.

“I’m really proud of having the teachers’ endorsement,” he said, noting lots of people assure him he has their vote once they hear who’s endorsed him.

Asberry has decided to run without the DFL endorsement. It’s a move that’s drawn harsh criticism from some, who expected her to drop out in support of the party’s pick. But she’s not at all deterred. In fact, she seems rather comfortable blazing her own path on the campaign trail and, in the four years she’s served on the board, she’s built a loyal network of supporters who are willing to break from the DFL line.

“I think there’s the endorsement and there’s the proven track record,” she said. “It’s just undeniable. I think the neighbors see what I’m about and how I stand for students.”

She first ran in 2012 against three opponents for the newly created District 6 seat. After a city DFL convention in which no one received an endorsement, her competitors dropped out. While Asberry’s ties to the community may very well have been enough to carry her through a contested race, she later received the party’s endorsement as the sole remaining candidate.

With just five weeks left to go until Election Day, MinnPost caught up with both Jourdain and Asberry to see how things are going in what promises to be one of the most competitive matchups. With more than 40,000 registered voters in their district alone — a number that trumps some legislative districts — both candidates have lots of ground to cover.

At a recent meet-and-greet house party hosted by his supporters in the King Field neighborhood, Jourdain mingled with seven adults eager to talk about school issues over wine and appetizers.

Barry Vornbrock, a constituent who’s studied both candidates, says Jourdain has his vote. “The board, as a whole, has not succeeded. [There’s been] no progress in the last four years,” he said listing his disappointment with the drawn-out superintendent search as an example. “Frankly, I believe Tracine would be a great consultant to the board. I’m, at this moment, leaning towards someone different.”

Ann Smith, one of Jourdain’s campaign volunteers, says he has a lot of personal appeal. “He’s got lots of experience with struggling families and communities,” she said, noting he’s sincere and understands the neighborhoods he’d be representing.

Taking a moment to delve into an issue that’s important to him, Jourdain brought up standardized testing and the opt-out movement. Based on his experiences with his eldest son, he says, high-stakes testing was an anxiety trigger more so than a true measure of what his son had learned in class. “I don’t believe in using test scores to determine how our teachers are doing. But it’s not an issue I would push on people,” he said, so long as parents are informed of their right to opt their children out.

Jourdain has four children; two of them are MPS graduates and two are enrolled at Bancroft. He’s been involved in their schools through volunteer work and serving on various site councils.

But it’s his experience in human services — helping families overcome challenges with things like domestic abuse, substance abuse and affordable housing — along with his experience as a Native American parent that have compelled him to run for the school board.

“We’ve never had that voice on the board,” he said, noting the Native American community has largely been underrepresented in the public education system. (Rep. Peggy Flanagan represented the Native community when she served on the board, he said, but she didn’t yet have school-aged children.) 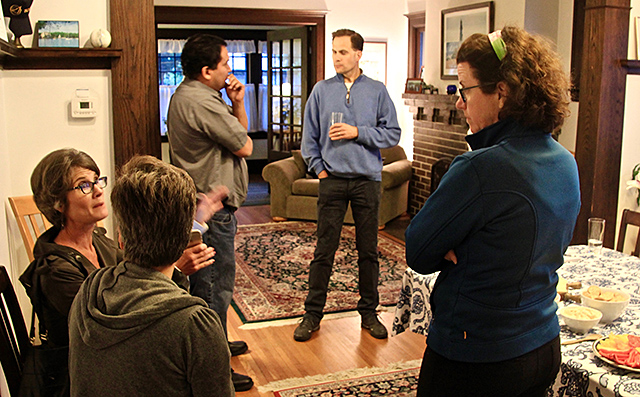 “I know [recess] sounds like a trite issues to some people, but I think you need to let kids be kids,” he says, adding it’s something parents have been requesting for a while now. “There’s been two petitions for it. I don’t know why it hasn’t been acted on.”

While, admittedly, he was essentially a noncontender when he ran for the citywide seat in 2014 without the DFL endorsement, Jourdain got an inside look at how ugly campaigns — even for school board — can turn. But things have been fairly quiet so far this year, he says. And he expects the race, at least in District 6, will stay cordial.

For Jourdain, that means hand-delivering campaign literature and yard signs, with the help of about six core volunteers, to voters four days a week. Prior to the city DFL convention, he estimates he’d already personally knocked on at least 100 doors — some more than once. It was this display of determination, he suspects, that secured him the endorsement.

“At the city convention some people were like, ‘You called two or three times. You’re really relentless. I see you really want it. That’s why you got my support,’” he said.

On her way to a “Team Tracine” meeting at a local coffee shop last Sunday, Asberry got a flat tire four blocks out. It was a minor setback, easily fixed with a call to roadside assistance and a surge of positive energy that she embraced as each volunteer arrived for an afternoon of door knocking.

Before making a T-shirt run to the stranded vehicle, Teto Wilson, a community activist who helped vet superintendent candidates after the search had been rebooted, shared why he’s supporting Asberry. He’s most impressed with her commitment to closing the achievement gap and addressing racial disparities in suspension rates — two equity issues that have long plagued the district.

“It’s hard to get real gains if you’re getting new people every election cycle. I feel like Tracine needs another opportunity to continue the work,” he said. “People are able to count on Tracine. She delivers.” 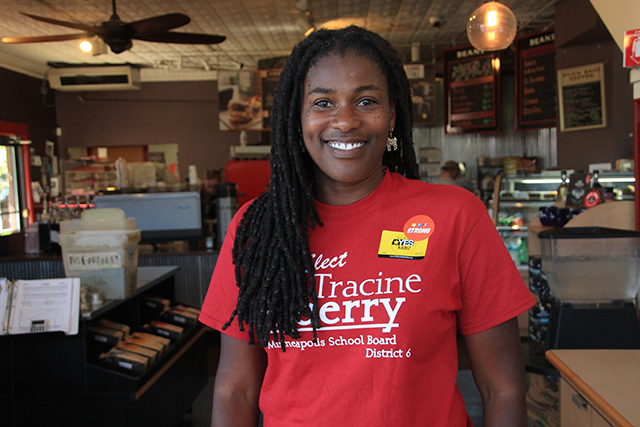 MinnPost photo by Erin Hinrichs
Board Member Tracine Asberry: “I think there’s the endorsement and there’s the proven track record.”

Eager to participate, Miles, her son who’s now in kindergarten, picked up his notepad and pencil and asked to tag along with Kenneth Eban, a member of Students for Education Reform, a local group advocating for equity in education.

Her two other children — Dominica, an MPS alumna who now attends Augsburg College, and Farrington, a student at Washburn High School — are also huge supporters of her school board ambitions, she says. “They know I have dreams, and they support me.”

Growing up in Detroit, Michigan, Asberry says her parents stressed the importance of a good education. “I grew up with the clear understanding that education is emancipation,” she said. “My
grandfather was a sharecropper. My parents lived during segregation. And I grew up during integration. So education was a right; it was not a privilege. That actually drives me.”

After a decade of teaching middle-schoolers in the Minneapolis district, she left the profession to further study family engagement. It became the topic of the dissertation she wrote while earning a doctor of education degree in critical pedagogy from the University of St. Thomas. And it’s remained a focal point of her work with St. Paul Youth Services, the nonprofit she’s led for the past two years.

Her comfort with and commitment to strong community engagement, even when it’s shed a critical light on district leadership, has been apparent during her tenure on the board. Most recently, she responded to concerns over a controversial reading curriculum and pushed for greater community input on the superintendent search after protests brought the initial search attempt to a halt. 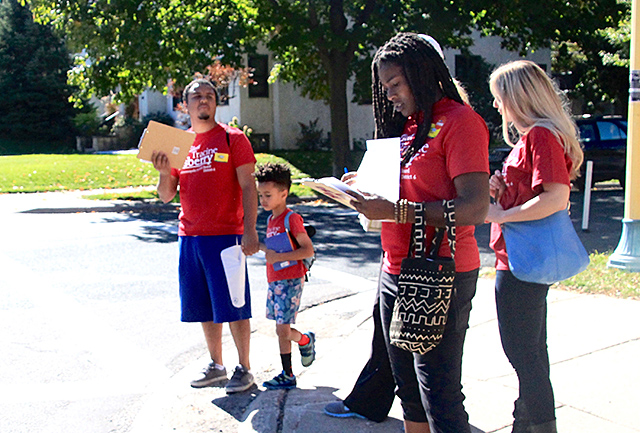 “I am committed to working as a team. I also know that these last 18 months required me to be a teammate that reminded us what we’re supposed to be about. I do not apologize about that,” she said. “Sometimes adults allow other adults to sway them. I’m really clear about the direction. I listen and am willing to adjust accordingly, but never at the expense of our students.”

Her ability to build and maintain relationships — whether responding to community concerns or showing up at school events and Tweeting her praise of students — makes her a formidable opponent in her bid for re-election.

She may not have the backing of the DFL Party or the teachers union, but she’s been holding her own door knocking, phone banking, sending out newsletters to the 1,100 people on her list-serve and lit dropping at community events. She’s convinced her track record is strong enough to buck the influence of those endorsements.

“Remember, public education is nonpartisan. People sometimes forget that. It is to be inclusive of every single family in our district. We need to make sure that is true of how we govern,” she said. “We need to be careful of the endorsements we have to make sure no endorsement pulls us away from making those hard decisions for students. I say that because sometimes they may be decisions that make adults uncomfortable.”

Jourdain vs. Asberry: School-board candidates put endorsements to the test in southwest Minneapolis