During a recent round of morning check-ins, Principal Derek Davidson called over one of his ninth-graders who’d been absent a few days.

Setting his backpack up on the table, the student showed Davidson some of the gay-pride buttons he’d received from a workshop he’d attended, where he was able to safely explore his gender identity.

Beaming while he recounted the sessions, he told Davidson, “I feel confident in who I am.”

They took a moment to celebrate the proclamation, then Davidson brought their conversation back to academics. The student admitted he was feeling really behind and was struggling to find motivation.

Davidson coaxed the conversation along, asking him to self-reflect and figure out what was draining his motivation at school.

After fidgeting with the buttons on his backpack for a bit, he offered up an honest answer in a lowered voice. “I’ve been having a really huge problem at home and it’s affecting my school work,” he said.

He went on to explain that he’s been trying to come to school with a positive attitude, but he’s dealing with a drunk father at home. When they get into confrontations, he gets angry. That anger is followed by a lingering sense of guilt — and it all gets in the way of being able to focus on schoolwork.

Davidson gets it. He grew up with an alcoholic, drug-addicted father, who spent time in prison. But he found a way to manage the feelings of anger that threatened to hold him back and eventually started pouring his energy into the things he did have control over.

“There is hope your life can be yours, aside from those problems,” Davison told his student.

It’s the sort of advice he offers up often at Venture High, a Minneapolis public charter school located on University Avenue that serves students who, typically, have had an adverse experience with school elsewhere. Here, strong educator-student relationships allow for a unique approach to student learning that prioritizes personalized learning and entrepreneurship.

“We believe there’s an acceleration of learning when kids feel safe; and we’ve seen it,” Davidson said.

Venture High currently serves 72 students in the ninth grade. It’s an extension of Venture Academy, the 6-8 middle school housed in the same building that opened its doors for the 2013-14 school year.

The middle school has gained a fair amount of recognition over the years, as one of 20 schools nationwide to be awarded a $450,000 Bill and Melinda Gates Foundation Next Generation Learning Challenges start-up grant. Also, a team of four Venture students took first place, over 10 teams of adults, at a local startup design competition last spring.

Keeping in line with the middle-school model, Venture High is designed to allow for innovation and independent learning. Physically, that means breaking from the traditional classroom model, where students are expected to sit at an assigned desk and learn in step with their peers.

To encourage more self-regulated learning, Davidson devoted the majority of the modest space to an open commons area with tables and chairs. Here, aided by their personalized learning dashboards on their laptops, students can manage their workflow in a way that best suits their needs — whether it be building in YouTube video brain breaks, going back to re-do an old assignment for a better grade, or tackling an assignment that’s above grade level. 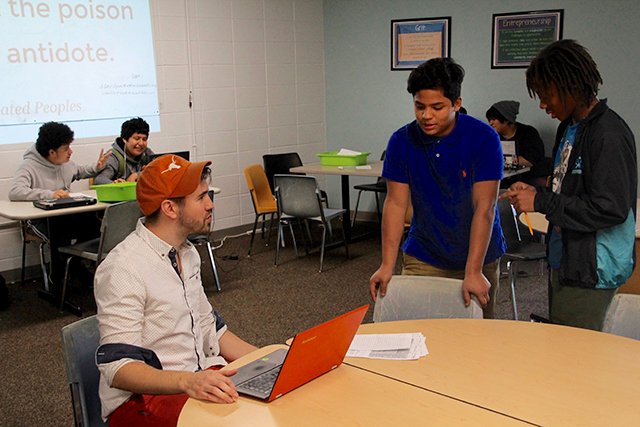 The personalized learning software the school uses was developed by a team of Facebook engineers out west. Venture is the only pilot school in Minnesota, so it’s often hosting visitors — both those curious to see the new tool and those trained to help work out the kinks.

This flexibility for students to learn at their own pace, coupled with strong teacher relationships and high expectations, allows Venture to meet the needs of a wide range of students. Roughly a third of the ninth-grade class are English Language Learners, 27 percent receive special education services, and over 90 percent live in poverty. Then there are the layers of trauma that many of these students are faced with as well.

“There’s lots of students with significant mental health or home challenges,” Jon Bacal, a founder of the school, said. “Those aren’t excuses for anything. They are realities, however, that relate strongly to school outcomes.”

On average, students enrolling in Venture start out three to four years below grade level, Bacal said. Despite this, they’ve seen good growth in math and reading — over 200 percent growth in both reading and math by the second school year. But proficiency scores remain well below the level of their peers statewide.

It’s something staff are working hard to address. But in the drive to make academic gains, they’re careful not to lose sight of the value of creativity and real-world work experiences. That’s why the high school model is one part project-based curriculum and one part internship exploration.

Each trimester, teachers combine two core subject areas for eight weeks of foundational learning. Once students have a solid grasp on the content, they have three weeks to work on a project that will be on display the final week during a showcase event.

Currently, students are wrapping up a unit called “Darwin’s dystopia,” which involved writing a dystopian narrative based in evolutionary change. Depending on each student’s reading level, they were assigned one of three novels so that they all had access to the core academic skills, along with the higher-order thinking tasks that are tied to the unit.

In addition to writing a dystopian narrative, each student spent time creating an artifact, using the materials available in the school’s makerspace — which is equipped with a 3D printer, electronics, tools, art supplies and more.

On Nov. 17, the middle-schoolers, parents, community members and students from other schools are invited to come see their projects on display at the school.

Offering a preview of his project, Jesus Castillo Palacios said human evolution, in his story, is based on adaptations that result from the collision of two nuclear missiles and the nuclear fallout. To avoid radioactive soil and rain, humans are forced to live in tree houses to survive.

“It seemed more realistic than the sun exploding or for the earth to stop rotating, especially with what’s going on nowadays with science technology getting better and more nuclear bombs being made,” he said.

He still doesn’t know how his story will end, he said, but he’s nearly done with the unit. Pulling up his personalized learning dashboard on his laptop, he can see what scores he’s received for various cognitive skills like being able to compare and contrast, and to come up with a central idea and develop supporting evidence.

All of these things translate to college and career readiness — the ultimate goal of all secondary schools. At Venture High, however, the emphasis is placed on the latter. Instead of framing a four-year degree as a necessity, school leaders are focused on unlocking students’ passions by exposing them to various career paths and helping them assess the most pragmatic route to getting there.

“The idea is that we want kids to have a plan for what they do from here,” Davidson said. “We feel that, potentially, kids could draw a straighter line to that goal.” 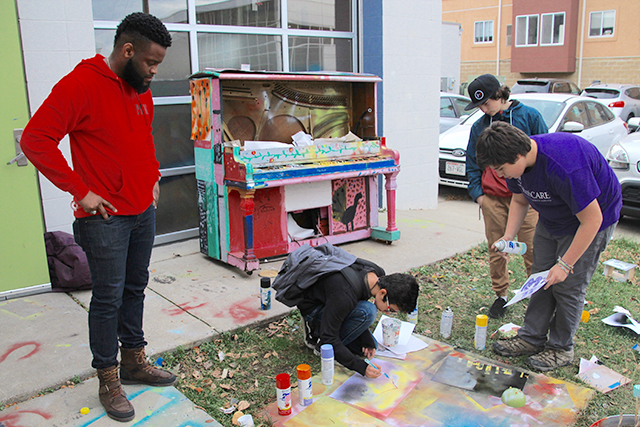 That’s where the school’s fledgling internship program comes into play. Margaret Holland, the high school partnership coordinator, is finalizing the various orientation materials that will cover everything from résumé building to how to dress for an interview. By early April, the hope is that every student will be interning off-site two days a week, from 9 a.m. to 3 p.m. In the span of eight weeks, they’ll complete a project that adds value to the business or organization.

As the high school expands to 10th grade, next year — and all the way to 12th grade, if all goes according to plan — the internship element will become more central. Students will complete as many 10-week internships as they want, spending two days each week exploring a different post-secondary option.

“We want them to leave our school with a real network of professionals they can reach out to after school,” Holland said.

As far as high school internship models go, it’s a fairly aggressive model. But leadership at Venture High see it as a distinguishing factor that will give its students — those who are vastly underserved by the traditional public education system — not only a sense of agency, but also a realistic shot at making a living wage doing something they find fulfilling.

“We need to have a lot more young people better prepared for their futures,” Bacal said. “That’s why we started this school.”