The newly elected St. Paul Public Schools board member, Jeanelle (Jeannie) Foster, completed her first committee of the board meeting Tuesday evening. She’ll cast her first vote at the regular board meeting next Tuesday, where the board is slated to vote on a motion to adjust school start times for the 2018-19 school year.

While it’s not specified in the motion, in response to research-backed best practices, the adjustment will likely include later start times for secondary students. At least that’s what Board Chair Jon Schumacher and Treasurer Steve Marchese have been adamant about up to this point. Board Member Chue Vue still has reservations about how elementary students — who would be starting earlier — might be impacted by the switch. And he’s concerned about the projected $2 million to $4 million price tag since the district is already running a deficit. It’s also investing in a superintendent search after buying out former superintendent Valeria Silva.

“I think that the motion, itself, seems to suggest flexibility. But in my mind, I think the intent here is later start times for secondary kids will happen and the other pieces will just have to fit in,” Vue said at the meeting. “That may not be prudent, in my opinion, with a limited resource that we have, with a lot of achievement and other issues we’re having right now.”

Schumacher defended the motion, as currently written, saying there will be time to work through all of the roadblocks so that any benefits to high schoolers do not come at the expense of younger students and their parents.

“I would say that this motion allows for the kinds of concerns you have to find solutions and that will be a primary focus — to make sure this does meet the needs of all our students,” he replied.

Regardless of the outcome next Tuesday, one thing’s for sure: This is one of many divisive issues the next superintendent will inherit. Interim Superintendent John Thein would like to see the board take action on it soon, so his successor inherits a project with a to-do list rather than a contentious point of indecision.

“I’m looking forward to starting the process so when our new leader … comes on board that he or she will be able to hit the ground running with this project. A good deal of the legwork will be done,” Thein said at the start of the meeting.

Update on the search

Kaohly Her, board administrator, offered a review of the nationwide superintendent search process thus far and previewed some of the upcoming opportunities for community engagement.

Back in late September, the board consulted with Jerry Robicheau — a friend of Thein’s well-versed in superintendent searches. Out of that meeting, the board decided to move in the direction of hiring an external search firm to help recruit and vet candidates. A selection committee reviewed all search-firm applications and recommended three firms for the board to interview on Nov. 14. The next day, the board offered a contract to Iowa-based Ray and Associates. The contract is being finalized.

While all of this was taking shape, the board had begun working with consultants through the Dispute Resolution Institute at Mitchell Hamline School of Law and the Minnesota State Office for Collaboration and Dispute Resolution. At no cost to the district, these consultants began working with members of Parent Advisory Councils, district staff, families and more to create a design team to lead the community engagement process. The design team met to figure out how and when community feedback would be collected throughout the superintendent search process. 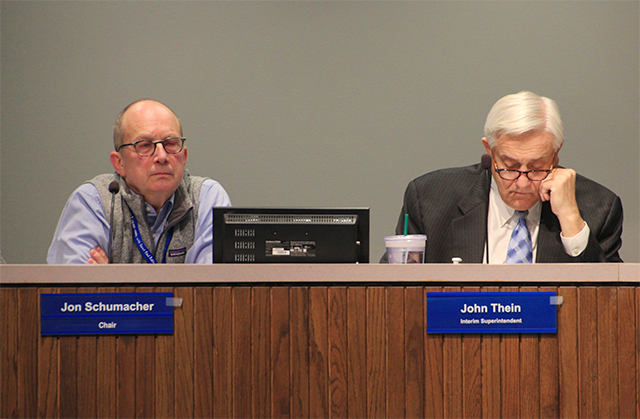 Based on their recommendations, four community meetings will take place, beginning Thursday, Dec. 15, at Washington Technology Magnet School, off Rice Street, from 6 to 8 p.m. All four meetings will take place at a high school, and will involve small-group discussions with facilitators who will collect feedback and share it with the search firm and board. These initial input sessions will focus on helping to create a superintendent profile, with a list of desired qualities.

In addition to the meetings, community members will have the opportunity to weigh in via an online survey that will be available through the district’s website Dec. 15 to Jan. 23, 2017.

As of now, candidate interviews  — both with community members, through a forum, and with board members — are projected to take place the week of April 17. By May 1, the board will name a finalist.

On Nov. 19, James Eli Shiffer, Star Tribune columnist and editor of the paper’s watchdog and data team, brought attention to a recent exchange between the state and the St. Paul school board.

Apparently, the board is entertaining the possibility of holding a series of board meetings in private to, with the help of a facilitator, “improve trust, relationships, communications and collaborative problem solving among Board members.” Additional meetings that involve school administrators and union leadership might be arranged for the same purpose, they posited.

But, first, they sought guidance from the state on whether or not these secret meetings would run afoul of the state’s Open Meeting Law.

In a Nov. 4 advisory opinion, Matthew Massman, the state administration commissioner, said such meetings were allowed, so long as they do not involve discussion of any official business of the board. Sessions “devoted solely to developing skills in communication, planning, delegation of responsibilities and decision-making, and to strengthening and clarifying an understanding of the responsibilities of council members,” the opinion states, do not constitute matters of official business.

This green light drew a backlash of criticism from local media, starting with Shiffer, who questioned the likelihood of these conversations “staying on the kumbaya level.” He framed the board’s intent to meet in secret as part of “a disturbing trend” of “politicians deciding they can’t govern in public.”

The Pioneer Press editorial board raised similar issues  in a Nov. 30 editorial titled “Not the public’s business? That’s a stretch, St. Paul school board.” They pressed Board Member Mary Vanderwert and Board Chair Jon Schumacher on the matter and sought the reaction of Don Gemberling — a retired state leader in this realm, who used to work for the state department of administration.

Gemberling basically said it was naive of the state to believe the board would truly refrain from discussing business in closed-door meetings. Even if that were possible, he contends that any work done under the banner of public engagement work does, in fact, constitute official business.

With that, the editorial concluded, “Conflict among those we elect is a given. It’s how we work things out. Those who raise their hands to seek office and then swear to serve should do so knowing that the hard work of working things out — in public — is part of the process.”