In anticipation of the 25th anniversary of chartering, the Minnesota Association of Charter Schools (MACS) decided it was time to get back to its roots by recognizing pockets of innovation worth replicating. Minnesota is, afterall, home to the nation’s first charter school law, which was signed into law in 1991. At a current statewide count of 165 public charter schools that are serving roughly 48,000 students, this school sector is full of creative educators. But they don’t always have communications staff working to widely disseminate their success stories.

So, MACS put out a call for applications and conducted site visits for the first-ever batch of Innovation Awards. Of the 13 applications received, five winners received recognition and a $1,000 check to support their work at an awards ceremony on Tuesday at a hotel conference room in St. Paul. The five award categories reflected the five charges of innovation outlined in the charter school law.

MACS Executive Director Eugene Piccolo says the awards are about more than offering recognition to charters that are experimenting and getting results. It’s also an effort to document the innovation taking place in this public education sector, so advocates have a more comprehensive record of the innovations taking place, rather than anecdotal accounts that aren’t widely shared.

Ted Kolderie, a contributor to the original charter-schools law who now serves as co-founder and senior fellow at Education Evolving, teed up the awards presentation on Tuesday by adding a bit of historical context to the awards.

“A lot of us who go back to the beginnings have the notion that the charter sector is basically about innovation, should be about innovation,” he said, adding it’s a small sector capable of making large-scale contributions when used as “a platform for innovation.”

He contends, however, that the charter sector is still largely misunderstood. In response, Education Evolving, a nonpartisan Minnesota-based group of thought leaders in education reform, recently started a blog to provide dedicated, in-depth coverage of the local charter sector. Their newest staffer, Krista Kaput, is the main contributor to the blog.

In the area of increased learning opportunities for pupils, the St. Paul-based Community School of Excellence won for the work some of its students are doing with the Linux operating system and other open-source software to help close the technology divide in their community. At this K-8 Hmong language and culture charter school, middle school members of the Asian Penguin Club are refurbishing old computers by installing Linux software and donating them to families in need. The club, which began five years ago under the direction of the school’s technology coordinator, Stuart Keroff, has given away more than 60 computers.

The Community of Peace Academy High School, a PreK-12 charter located in East St. Paul, won in the “different and innovative teaching methods” category for its leading efforts in college prep. Educators hold high expectations of their students and actively support them in their early exploration of college-level coursework through concurrent enrollment options offered both in school — through College in the Schools classes — and offsite at the University of Minnesota, through PSEO course offerings. During the 2014-15 school year, students earned 460 college credits, totaling over $200,000 savings in college tuition costs.

Avalon School, a teacher-powered 6-12 charter school located in West St. Paul, won in the “different and innovative forms of measuring outcomes” category for its successful implementation of project-based learning. A deviation from the traditional classroom structure, this learning model allows students to work at their own pace, with the guidance of an adviser, to demonstrate subject mastery. At the end of each unit, students demonstrate what they’ve learned at a showcase event that’s open to the community. The award also recognized the school for its innovative approach to conducting 360-degree teacher evaluations. Based on feedback teachers receive from their colleagues, advisees and families of their advisees, they are constantly adapting to be more responsive to their students’ needs. 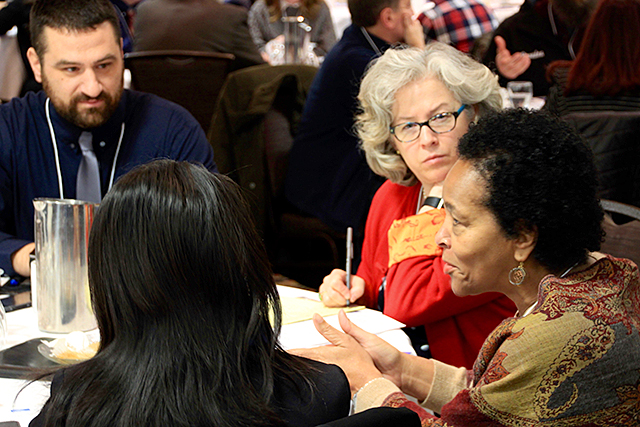 MinnPost photo by Erin Hinrichs
A group of attendees discussing the issue of equity in charter schools during Tuesday night’s award festivities.

In the area of new forms of accountability for schools, Yinghua Academy in Northeast Minneapolis won for the work it’s doing to ensure students have access to advanced Chinese language courses once they graduate from the K-8 Chinese immersion charter. Recognizing a gap in access to language instruction that could lead to a loss of language skills by the time students reached college, the charter found a way to remedy this issue. By partnering with Minnesota Online High School, Yinghua graduates — along with students outside the school who meet the language skill criteria — can enroll in Advanced Chinese 1, 2 and 3. These online courses are designed to prepare them for the AP language exam.

In the realm of new professional opportunities for teachers, Minnesota New Country School, a K-12 charter school in Henderson, won for its teacher-led operating model. Structured as a cooperative, school faculty run all administrative processes, saving the school administrative costs that can, instead, be invested in school improvement. Each teacher sits on two administrative teams and one academic team. Jim Wartman, an adviser at the school, says the ownership empowers teachers and improves levels of teacher satisfaction and retention.

“One of the biggest benefits is the kids see us running the school,” he said. “The kids know that we’re passionate about what we do and we have to have courage to take on things that are challenge because we believe in them.”

A second batch of winners will be announced at MACS’ conference during National Charter Schools Week in May 2017. The applications window will run from Dec. 12 to Feb. 3. Moving forward, the awards will be presented annually in the spring.