When Rashad Turner stepped down from his leadership role with Black Lives Matter in the city of St. Paul in early September, he pinned his decision on a single point of contention: National leadership of both BLM and the NAACP had recently called for a moratorium on charter schools, a move that he, fundamentally, didn’t agree with.

A strong supporter of charter schools and education reform, he told media he felt the movement had been “hijacked.” He could no longer be affiliated with a cause, he explained, that was prioritizing an attack on charters — many of which are successfully serving marginalized students — over an attack on the root causes of the achievement gap, such as the disproportionate number of suspensions and expulsions of children of color in local schools.

“For me, it was a point where I had to kind of question what my values were, where my passion really stood,” he said. ”Education is my passion.”

Prior to his role with BLM, he’d spent years working in both K-12 education and higher education. He knew he wanted to resume this work, only in a different capacity. So he considered starting up a local nonprofit focused on education advocacy. But a few of his mentors told him to check out the cross-sector, collaborative work to close the achievement gap that Minnesota Comeback — a relatively new Minneapolis-based education nonprofit that’s positioned itself as a harbormaster, helping to coordinate education reform dollars and efforts to create more “rigorous and relevant” schools — had already kickstarted. As luck would have it, they happened to be looking for someone to lead their community engagement work being done to close the information gap for parents.

“I really appreciated all the work that had been done,” Turner said, noting he felt the nonprofit had already taken very intentional steps of listening to the needs and concerns of community members. “I don’t see that happening all the time, whether it be nonprofit organizations or other organizations. I just hadn’t experienced that. So, for me, that was what turned me on to Minnesota Comeback and got me going, made me apply.”

Following a competitive interview process, Turner was asked to come on board Nov. 1 as the nonprofit’s director of community engagement. This branch of the nonprofit, which aims to “develop parent leadership and agency in education,” was recently infused with $184,000 in grant money to fund two initiatives geared to help inform parents so they are empowered to get involved in shaping the education system that’s serving — or, in many cases, underserving — their children.

This past year, Minnesota Comeback conducted “design thinking” conversations with diverse groups of parents and community members to find out, firsthand, what they thought was needed to improve their children’s access to a quality education. What they discovered is that parents often don’t even have access to enough information about schools and how their kids are doing academically to feel they can advocate for their child, let alone advocate for systems-wide changes.

“They are hungry for information on schools, on options,” Nicholas Banovetz, the director of external relations for Minnesota Comeback, said. “They are hungry for learning more about curriculum and ‘Are their kids on track to graduate from high school on time?’ They see tremendous barriers in accessing information.”

The barriers can be something as simple as parent handbooks that aren’t translated for those who aren’t fluent in English, or as systemic as a lack of high expectations for students of color and students who come from low-income families. 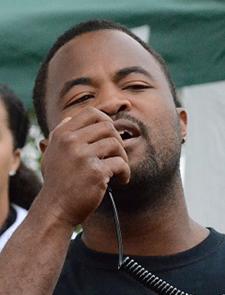 For instance, Latasha Gandy, executive director of Students for Education Reform-Minnesota and St. Paul Public Schools graduate, didn’t realize how she was being underserved by the public education system until she got to college and had to pay to take remedial courses.

“I literally  went through my whole high school experience thinking I was on track to go to college,” she said. “I was top of my class, had a 4.2 GPA, and made it to college and had to take remedial courses.”

The data show that she, as a black woman, was more likely than her white peers to be placed in remedial coursework in college. Her disappointment and frustration was amplified when her oldest daughter began struggling to read and she didn’t feel teachers were taking her requests to help intervene very seriously.

“The biggest thing that needs to change with parent engagement is realizing that you often hear people say parents don’t care, they don’t have enough time. But a parent will make time to make sure their child is receiving the education they need,” Gandy said, noting parent engagement needs to be done in a more authentic way. “Don’t just use a parent’s time for how it’s going to help you do your job better, but actually educate a parent on: How do you know your child is growing? What are the proper questions to ask at conferences? How do you pick a high quality school?”

These are the sorts of questions that Turner and his team are seeking to not only spark among parents who have traditionally been left out of the education conversation, but also to empower them to answer and eventually address.

Reflecting on the conversations Minnesota Comeback facilitated with parents of color, Banovitz said the need to close this information gap for parents became very apparent. “They see that, oftentimes, white people have an internal institutional compass. They know how to navigate the system. They know how to advocate. And they’re used to getting their way,” he said. “But that oftentimes for a person of color, or people who may be new to the country, first generation, they don’t have that same compass.”

NewPublica, a locally based communications organization that focuses on new audiences, received one of two grants to close the information gap for parents that Minnesota Comeback announced last month.

Iris Altamirano, director of community engagement for NewPublica, says the $94,000 grant will be used to fund a couple of different initiatives, including support for the newly launched website Challenge the Ed Code and programming for La Raza (1400 AM) and Somali American Community Radio (101.7 FM).

The website is structured to serve as a space for parents to share their experiences and concerns so they begin to feel validated and empowered.

“With the hub, I would say it’s a place where we’re also cutting through that isolation and we’re also challenging this notion of disbelief,” Altamirano said. “When things happen to us they’re sometimes so egregious it’s almost unbelievable.”

Challenge the Ed Code also serves as a resource for parents who are looking to access easily digestible, relevant information that will enable them to make more informed decisions about their children’s education. In an effort to truly be inclusive, the website offers translations in Spanish, Hmong and Somali — a challenge many education systems fail to address. It also includes a countdown to the next Minneapolis Public Schools board meeting, so parents who may be inspired to begin advocating for change in a more concrete way know how they can access the policymakers. So far, the website has reached more than 14,000 unique users. It’s engaged about 1,000 parents in doing things like adding, reposting or commenting on content.

The radio programs offer listeners education-related information that helps them think more critically about how the current education system is serving its English Language Learner students. Altamirano says they feature guest speakers from the district who share information about programs like PSEO and other underutilized resources, along with stories of inspiration from members of their own community and discussions on how to do things like break down the various elements to consider when looking for a quality school.

Underscoring why engaging minority parents in a critical conversation about how their kids are impacted by the achievement gap, she said, “I think, for Latino kids, we’re just highly neglected. Our parents trust that what’s happening in the building is good for our kids and it’s better than we had. I feel like this system takes advantage of that.”

Students for Education Reform-Minnesota, the other grant recipient, is taking a different approach to closing the information gap for parents of color. Gandy says the $90,000 her organization received is funding two part-time organizer positions. These organizers are literally going door-to-door, having one-on-one conversations about education with parents, and going to community events to connect parents with information about shortfalls in the education system — whether it be a lack of culturally relevant curriculum, disparities in discipline or some other issue.

“We’re also working with parents just to hear what are their concerns? What do they think is relevant in their child’s school? What, to them, is important for their child to know?” Gandy said.

The bulk of this outreach work is being done in North Minneapolis, where Minnesota Comeback identified some of the highest-need neighborhoods, when it comes to closing the achievement gap.

Gandy says her team also hosts workshops for parents so they know how to do things like navigate the system when they have a grievance with a teacher or an administrator, and are invited to weigh in on shaping policies like the new state accountability law, the Every Student Succeeds Act. And they’ll go the extra mile to make sure parents are given the opportunity to show up for these conversations. It’s a commitment that often entails offering rides, providing dinner and child-care services, and being mindful of scheduling so that working parents aren’t expected to take time off to participate.

They also facilitate house meetings. “What that is is I meet you, I talk to you … about education, and then I ask you to host a house meeting either at your house — or anywhere, essentially — but you bring five friends and we’re sitting, we’re having conversation. It’s really about relationship building. And that one-on-one grassroots work,” Gandy explained. “It’s time intensive. It doesn’t go fast. There’s also a piece of convincing some parents that there’s something wrong with the system, because they’re just not informed.”

Recognizing that closing the information gap for parents will require a whole lot more of these types of grassroots efforts, Minnesota Comeback has announced its community engagement team will be accepting a reviewing another round of project proposals in early 2017.

“Every organization doesn’t necessarily need to be doing the same thing, but it sort of needs to align,” Turner said. “So I would say that in a year from now, the work that NewPublica’s done, that SFER’s done, it’s something where now we have this passionate base of diverse parents and it allows us to go to them and say, ‘Hey we’ve accomplished closing this information gap’ — and we still maybe have outliers, so we’d still be doing that work — but now, ‘Hey parents, what do you want to do next?’ ”