As President Barack Obama said more goodbyes last week, one of his education officials made his way to Minneapolis to deliver a farewell speech of his own. James Cole Jr., outgoing deputy secretary and general counsel to the U.S. Department of Education, made an appearance at Patrick Henry High School Friday afternoon to reflect on his own path — from growing up in Chicago’s south side on food stamps to working on Wall Street and then serving under the first black president.

Cole oversaw the department’s work on Obama’s My Brother’s Keeper task force. The initiative focuses on closing the opportunity gap faced by young men of color through mentoring that empowers them to pursue good career and postsecondary options.

For Cole, the work strikes a personal chord. Back in high school, he felt the pressure to skip college and get a job so he could help support his family. His mother had died when he was 14 and his father’s Alzheimer’s had progressed to the point where he could no longer work. But he credits a high school English teacher who recognized his potential with persuading him to become the first in his family to graduate from college.

Speaking to students at Patrick Henry, Cole advised them to utilize their mentors for support and assured them financial constraints should never be a limiting factor when it comes to considering college as an option. Having overseen the Education Department’s financial student aid office, he told them the federal government awards $150 billion in grants and checks each year.

“You need to get your piece of that $150 billion,” he said to the gymnasium full of black male students, noting there are also other sources of financial aid available at the state and local levels.

While Obama has said he plans to stay involved with the initiative — which he recently renamed the “Task Force on Improving the Lives of Boys and Young Men of Color and Underserved Youth” to help “ensure the federal work continues” after he leaves office, as reported by the Washington Post — Cole took a moment to recognize the momentum it’s helped generate, so far, for changing the trajectory of male students of color in America.

“We have more black boys graduating today than ever in history,” he said. “There are 1 million more black and Latino boys in college today than there were when President Obama came into office. People kind of expect us to be sad or unhappy, or ‘Oh My God, the world is coming to an end.’ I can’t get sad. … I am excited.”

While black male youth watch Obama pass the baton to President-Elect Donald Trump, they need to be able to continue to find strong, professional role models of color in their own communities through events like the “100 Black Men Strong” event hosted at Patrick Henry.

James Burroughs, the state’s chief inclusion officer, helped start a black-boy-only version of the event at Patrick Henry in 2012 when he realized this student subset needed the most support out of any minority group. They were persistently plagued by the lowest grades, the lowest test scores and the lowest graduation rates, he said. And the area they were leading in — suspension and expulsion rates — didn’t bode well for their futures.

The push to celebrate the potential of black male youth — both African-American and African immigrant — and pair them with black male role models in the community wasn’t always popular among those who felt the focus should be more inclusive. But Burroughs is glad to see the event hasn’t strayed from its narrow focus. 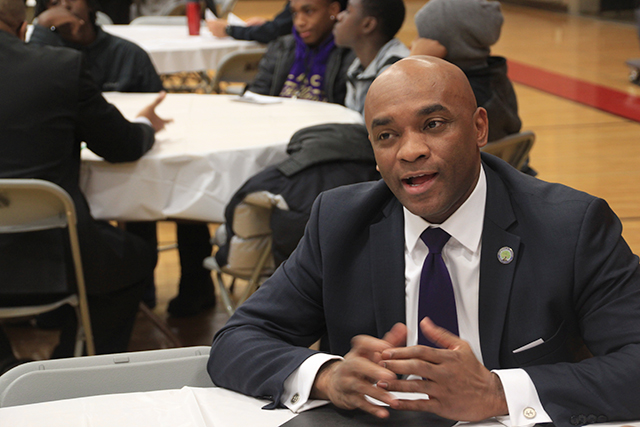 MinnPost photo by Erin Hinrichs
James Cole Jr.: “There are 1 million more black and Latino boys in college today than there were when President Obama came into office.”

“Equity is about giving each individual what they need to be successful,” he said.

In the case of black male students, having the opportunity to engage with professionals who look like them — who aren’t their family members or teachers — allows them to explore new life skills and college and career pathways.

On Friday, black police officers, college staff, entrepreneurs, businessmen and more flocked to the Minneapolis high school, which serves a largely black student body, for a full day of mentorship sessions and brunch to “disrupt the single narrative of black males,” and to offer up their fellowship, advice and support.

As brunch was served in the gymnasium, all participants sat down at circular tables for some guided conversation to help cement some of the main messages of the day and build one-on-one mentorship relationships.

Seated at a table with four students and four mentors, Tyrell Dunlap, a sophomore at Patrick Henry, shared that he’s struggling in his U.S. history class because of social distractions. It was a dilemma many at the table could relate to.

“They need someone to go down with them,” Barkley Barton, an undergrad admissions employee for the University of Minnesota, said, acknowledging the dilemma.

His colleague, Delont Leflore, an admissions counselor at the University of Minnesota, advised Dunlap to try to meet with his teacher to explore alternate options “if you can’t learn in that particular space.”

Corey Bullard, a UnitedHealth Group employee who works on tech compliance, added another suggestion to the conversation: Make sure the teachers understands you respect the class, even though you’re distracted.

Student data show that black male students are disproportionately singled out by educators for behavior-related special education services and pulled out of the classroom for subjectively defined disciplinary actions like willful defiance. 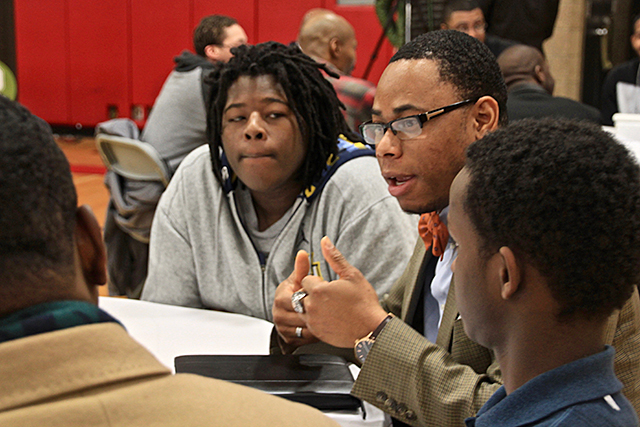 MinnPost photo by Erin Hinrichs
Delont Leflore, right, an admissions counselor at the University of Minnesota, speaking to students on Friday, including Tywon Tyson, center.

In coaching this group of students on how to better advocate for their needs in the classroom and how to build meaningful relationships with their teachers, these mentors emphasized a lot of success in school has to do with attitude and initiative.

When an eighth-grader, who will be entering Patrick Henry next school year, shared that he often feels that his teachers unfairly single him out in the classroom — admittedly, sometimes because he’s chatty — the mentors at his table pressed him for more information.

“Are you finishing before other people in the class?” Barton inquired, pointing out how this negative could be masking a positive.

Leflore suggested the student could put his spare time to better use by serving as a tutor for his peers who aren’t grasping the material as easily.

And Bullard wrapped up that bit of discussion with an incentive to keep the lines of communication open: “When the teacher stops talking to you, that’s bad — it’s like they’ve given up on you.”

Malik Day, a 2013 Patrick Henry graduate, delivered a keynote address over the brunch period. He’s currently enrolled in the Carlson School of Management at the University of Minnesota. But, in many respects, he was only a few key decisions shy of become another statistic when he was in high school.

He’d transferred to Patrick Henry from Edison High School, where he’d been expelled for getting into a fight. His school life was complicated by stresses at home. Growing up in north Minneapolis in a single-parent family with eight siblings, he experienced years of homelessness. No one in his immediate family had graduated from high school; and the men in his life — both his grandfather and father — were largely absent because they were in jail.

After ending up in juvenile detention for a few days after getting in trouble with a few of his friends, he realized he needed to make some changes if he wanted to create a better future for himself.

“It’s really difficult to do something big without an education. That’s why I decided to give this school thing a try,” he said, crediting one teacher with helping him turn things around.

That work wasn’t easy. It included waking up at 4:30 a.m. every morning — even on the weekends — to do his homework before school started, he said, because his evenings were reserved for working 35 hours a week to help support his family. In the end, he graduated from the school’s International Baccalaureate program with a 3.6 GPA, he said.

Now in college, he’s disappointed to see there are so few black male students in his classes.

“We have the ambition. The problem is we don’t have a lot of sense of direction. So there’s a few things I want to talk about before I conclude,” he said, encouraging students to seek guidance from their school counselors and teachers, to pursue college scholarships, and to “make sure you’re on the straight and narrow.”

Revved up by all of the words of inspiration and empowerment, Patrick Henry Principal Yusuf Abdullah took to the podium to drive home a similar message.

“This is a solution to disrupt the pipeline [to prison]. We gotta call it out and we need to have men in the community come in and be part of the school community,” he said, adding that, in return, these young black men need to go out “and be a productive part of the greater community.”

Of course, the success of these black male students requires support from people outside of that gymnasium as well. Delivering a powerful message of solidarity, S’Sence Adams, a local female spoken word artist — along with her young daughter by the same name — performed a piece centered on the refrain: “I wanna hear you black boy, black boy. I wanna hear you speak.”

“The way I grew up, the man is the head [of the household] and the woman is the cultivator,” Adams said in an interview after her performance, noting the roles may be different but they’re equal in value. “It is our job to cultivate the black man, as their strong support system. They need that affirmation from us. We need to hear them speak.”